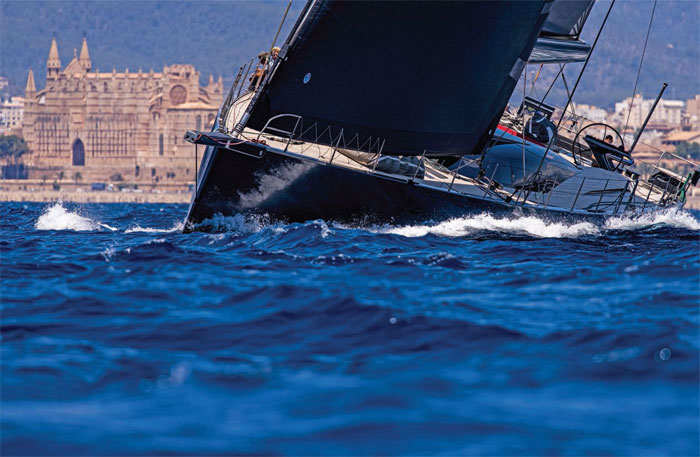 Superyacht Cup Palma (SYC) has always prided itself on being nimble and responsive in adapting itself to the ever-changing nature of the superyacht world, anticipating the expectations of owners, captains and crews, and responding promptly to requests or suggestions. And so it is with the 2022 edition of Europe’s longest running superyacht regatta which late last year – soon after celebrating its 25th anniversary – agreed to move the event to run from June 29 to July 2, a change of just a week from the original June 22-25 dates.

The adjustment came after the J Class owners selected the highprofile Mallorcan festival of sail as one of the three core events planned for their 2022 racing season. After consultation with the Real Club Náutico de Palma (RCNP), SYC’s race management partner, and a number of other superyachts that had already expressed an interest in attending, the change was agreed to avoid any potential clashes with other grand prix sailing events.

SYC’s agility was suitably rewarded with a trio of the iconic J Class immediately confirming they would be out on the Bay of Palma, and competing on their own bespoke racecourse. Topaz, Ranger and the 2018 SYC champion Velsheda will take their place in a fleet which organisers are confident will attract 12 to 15 entries to the highlight of the Mediterranean superyacht season.

Main picture: one of the key strengths of this event is that the sailing conditions on the Bay of Palma are among the best in the world... and among the most reliable

And in a further indication that Superyacht Cup Palma 2022 will be firing on all cylinders, organisers have announced that the world-class St Regis Mardavall Mallorca Resort is returning as a sponsor and SYC’s preferred hotel partner, with the five-star venue again providing its luxurious flair to the regatta. Also returning is SYC’s longstanding destination partner, New Zealand.

‘Over the past quarter of a century Superyacht Cup Palma has sought to be adaptable to the changing needs of the superyacht community,’ says SYC event director Kate Branagh, ‘and that is something we aim to keep on doing into the future.

‘The J Class has a long and distinguished association with Superyacht Cup Palma, so after extensive consultation with our partners – including the RCNP – and several other superyachts who had expressed an early interest in the 2022 event, we were happy to make the change.

‘The Superyacht Cup Palma tops the list of events for many to compete in and the sailing conditions on Palma Bay are second to none,’ Branagh adds.

Taking their place in the growing list of potential entries are two SYC first-timers with the streamlined and elegant 38m Oyster 1225 Archelon and the similarly striking 43m Vittersbuilt La Belle highlighting the broad appeal of an event that is equally alluring to newcomers as it is to regular participants.

Meanwhile among the prospective entries looking set to make a welcome return to SYC in 2022 are the 27m Pedrick-designed and Concordia-built sloop Savannah, which last took part in 2011, the classic Langan Design Associates’ 40m ketch Huckleberry eyeing a return following her SYC debut in 2019, and the 34m Gilles Vatondesigned Baiurdo VI which took a podium place in Class B at last year’s event.

Also expressing an interest in a repeat performance are the lightweight Malcolm McKeon-designed and Green Marine-built Missy and the equally competitive 108ft Baltic Yachts-built Win Win, which will no doubt be out to repeat her title winning performances in both 2019 and 2016.

‘Racing at Superyacht Cup Palma has always ticked all the boxes for Win Win – the competition is fierce but fair and friendly and Palma is such a fantastic world class venue, there is nothing not to like,’ says captain Will Glenn.

Of likely interest to the competitive owner, captain and crew on Win Win is the possible inclusion of a dedicated Performance Class at the event – again a direct response to a growing demand from the owners and crews of the increasing number of ultra-modern yachts and a further indication of SYC’s versatility.

Providing at least four entries sign up, the Performance Class will bring the competitive element and thrill of a mass racing start under RRS on its own bespoke course, further adding to the regatta’s already broad appeal.

SYC regular Peter Holmberg says, ‘I’ve raced in Palma for many years on all types of boats and I know it works because the owners love coming back and sailing here.

‘You now have a growing number of owners who have gone for faster, lighter, performance racer-cruisers, so for SYC to have their own highperformance class is a smart move and should produce some great racing,’ adds the experienced Virgin Islands sailor.

The Performance Class will join the long-standing Superyacht Class and the more recent Corinthian Class option, which quickly proved a popular addition when it was first introduced at SYC back in 2017. The non-spinnaker/restricted headsail Corinthian option allows owners and captains to race with fewer crew and take a more relaxed, family and friends approach to the event. 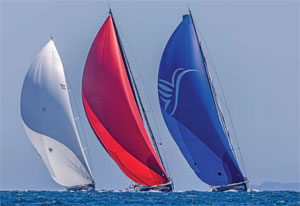 Above: a growing number of superyacht owners are now sailing faster, lighter racer-cruisers and the Superyacht Cup Palma has responded by adding a dedicated Performance Class to the regatta.
Below: the Superyacht Cup Palma has now been going for 25 years and it’s stronger than ever, with a trio of J Class racers set to headline this season’s regatta, sailing alongside at least a dozen other spectacular yachts 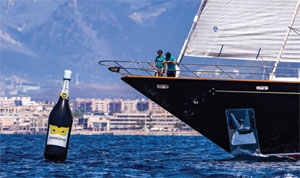 The trio of classes on offer now means that Superyacht Cup Palma offers something for everyone – quite an evolution for an event that began life back in 1996 as an end of Mediterranean sailing season sail loft get-together for crews waiting to go trans-Atlantic.

It soon added a racing component to go alongside the social side and in 2007, with the America’s Cup being held in Valencia, SYC joined forces with the New Zealand Millennium Cup to hold what was, at that point, the biggest superyacht regatta ever with 54 yachts gathered in Palma.

Now firmly established as the Mediterranean’s premier superyacht regatta, Superyacht Cup Palma has developed the shoreside activities to match the appeal of the peerless sailing conditions. In 2022 the race village, located at the prestigious Real Club Náutico de Palma in the heart of historic Palma, with the city’s striking cathedral as a backdrop, will again host the briefings, provide the venue for networking and informal meetings with sponsors or suppliers during the day, before becoming the host for evening happy hours, dock parties, live music and the celebratory prizegiving that concludes the regatta.

Palma’s extraordinary range of restaurants and accommodation, all an easy walk from the race village and dock, need little introduction, while the St. Regis Mardavall Mallorca Resort is a short ride away.

Beyond that of course Palma remains home to the world’s leading superyachts services and suppliers – including Astilleros de Mallorca, Evolution Sails, Gottifredi Maffioli, Marinepool, North Sails, Pantaenius Yacht Insurance, Rondal, RSB Rigging, Southern Spars and Vitters Shipyard, all of whom remain on the roster of SYC supporters as silver partners, while Baltic Yachts and DYT Yacht Transport add their weight as friends of the Superyacht Cup.

That said, at the heart of SYC’s success is the sailing and the camaraderie ashore after an intense day out on the water. Says SYC regular and multiple America’s Cup winner Murray Jones, ‘great conditions, great racing, fun ashore, and an excellent opportunity to network against the backdrop of Palma. The Superyacht Cup Palma is a regular in my calendar.’

It’s an appreciation fully echoed by another legendary sailor and a familiar face at SYC, Mike Sanderson. ‘Mallorca is a very special place to sail, and you just know that Palma Bay is going to turn it on with beautiful conditions.

‘I have raced a lot of different yachts in a lot of different places, and superyachts and Palma just go together. I love this event, it’s the full package – good sailing and good fun – it’s always a pleasure to race here and that is a big part of the enduring appeal of Superyacht Cup Palma.’

Having successfully negotiated the trials and tribulations of the last couple of years, Superyacht Cup Palma is looking ahead to a great event. ‘We were able to celebrate our 25th anniversary last year in some style, and we are looking to build on that longevity going forward,’ says Kate Branagh. ‘2022 is looking set to be a great way to start our second quarter-century.’

Superyacht Cup Palma will now open with superyacht registration and the captain’s briefing on Wednesday 29 June 2022, followed by three days of racing concluding on Saturday 2 July.