All in the planning 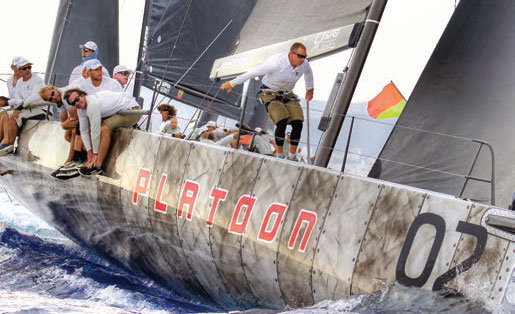 A long overdue return to a full TP52 Super Series season kicks off at a new venue, Baiona, and ends with the 10th anniversary of the TP52 Super Series in Barcelona, back where it all began when just five boats turned up for the Trofeo Comte de Godó in May 2012.

‘A few years ago Baiona hosted the J/70 Europeans at the same time of year and every day was about 18kt and everyone left super happy. With the Portuguese trade winds we sail inside the Ria de Vigo with the Cíes Islands protecting the area and so the water is flat, not like Cascais. It’s also a very even racecourse, with the islands a long way off so shifts are typically of around 5°. It is not like Cascais where you are very close to the influence of the shore.’

A big change for the Platoon team is a switch to Doyle Sails for 2022, prompted by their Olympic gold medal strategist and sail designer Jordi Calafat also moving lofts. ‘However, we think the sails will be very similar,’ says Mariño. ‘Quantum and Doyle use similar structures so I don’t think much will change… and Jordi is so good! Harm [Müller Spreer, owner-helm] is very conservative and we already have good speed. So it’s in our hands to win this year.’

Looking to how they can finally top the Super Series after so many near-misses, he concludes, ‘This year we need to be more structured and aggressive with our training. Last year we started slowly because of Covid and were too slow to push hard. This year will be longer days, more days, better training with other teams.’

Main picture: Already world champions when it comes to hull graphics, Harm Müller-Spreer’s team start another year determined that ‘this time’ they really are going to win the darn Super Series. The three-time runners-up are the first current team to switch to a full Doyle Sails inventory – a tremendous vote of confidence in the New Zealand loft by a TP52 team already operating at the very highest level. That confidence was boosted further last winter by the decision of the brilliant sail designer, gold medallist and Alinghi strategist Jordi Calafat to move from Quantum to Doyle’s thriving operation

One of the two teams who have stayed the distance since Barcelona 2012 (the other being Quantum Racing) is Tony Langley’s Gladiator. They are set to take on 2022 with renewed energy, possibly soon with a new boat. ‘We have had chats about 2023,’ says long-serving project manager Tom Wilson, ‘and we feel somebody has to make the first move. We were the first to have the newer boat (the 2015 Interlodge) – we have just sold the US TP52 so we have certainly been talking about it.’ He smiles wistfully.

Langley’s passion is undimmed, as is his commitment to running a mainly GBR team in 2022. Theirs is a strong, tightly knit unit that Wilson has kept rolling with a mix of professionalism and fun. 2017 was their best season, when their boat was newest, Ed Baird was with them and they flew Quantum Sails. 2018 was fractured by their parting ways with BAR, 2019 saw Langley experiment with sailing as tactician. This year Gladiator return to Quantum. Wilson notes: ‘There is a chance of some new foils in the fleet, but for us a lot more speed can come without spending £100,000 on a new keel. If we were struggling to find out why we were slow then we might do it, but we still have plenty of speed to unlock. That is one reason we’ve gone with Quantum, sharing their vast data bank and doing as much as we can to improve our all-round pace.

‘But it is also about having realistic expectations,’ he says, ‘setting realistic goals. We never want to go on the water without aiming to win, but correspondingly you don’t want to then be coming back every time and feeling you have lost. You have to decide a budget and work it back from there. It is more fun and successful being able to put the right good sailors on the boat. For us it is always about getting bang for the bucks... and Tony enjoying it.’

Secrecy is greater than ever this year. Winter mods included an option to fit a new foil package but who, where and when are the big questions. Botín’s Adolfo Carrau: ‘There will be a few appendage changes through the fleet. We have some better solutions, better shapes now. One of the benefits of working on the Cup is having access to better tools, CFD and engineers. You interact with people with different ideas and that triggers different innovations.’

Carrau naturally considers the speed improvements to be worth the investment! ‘They look like a nice gain. Usually we don’t want to lose anywhere. But we are finding good gains upwind.

‘There is the common perception that our boats are strong upwind and then just try to hold off the Vrolijk pair Platoon and Provezza downwind, but that is more about hull shape. That is simply the way we have been positioning our designs all these years.’

Will all the top Botín boats change foils? ‘Not all of them. Some of it will depend on the availability of machine shops and materials. The industry is super busy so some appendages will not arrive until later in the year. But even we don’t really know as the secrecy game is being played at a much higher level. The teams will have different appendages to choose from and will fit them according to the venue. We give them a menu of options to deploy as and when. That is all part of the game – not knowing who has what under the water.’

And the next generation of TP52? Tobias Kohl of Judel-Vrolijk suggests, ‘My biggest improvements would be going slightly lighter and, taking into account what is on the table already, becoming even more IRC friendly. The bottom line is we need the biggest group of owners to make the call (for change) themselves and say, ‘Right, we can sell our existing boats now into the IRC/ORC market’ and have a group of four or five of them saying, ‘Now let’s have another round’. Then others will follow for sure.

‘This season owners will come together to discuss what to do. They will use 2022 to develop the rule and 2023 to build new boats and then in 2024 have a complete restart. That is realistic. The boats are more and more complicated and it is a mistake to push too fast. I still think we can go lighter but maybe have some more controls on deck. Definitely we would go for a deeper keel.

‘But we must ask the sailmakers how much a taller rig really gives us and then ensure with IRC and ORC rulemakers that it is fairly rated. Because if we go taller in the rig that pretty much closes the door for some potential new owners. You buy a good secondhand boat but immediately have to put in a new rig at 300,000-400,000 euros; whereas putting a new fin on an existing boat or even just re-milling the bulb would cost you much less.’

Botín’s Carrau is on the same page: ‘The boats need to match the rating formulas that are used outside the circuit. As well as IRC, in the past 10 years there has been more use of the boats in ORC too; we have to keep the boats easy to sell on so the class can keep progressing. The new boats now being sailed outside the circuit, Fox, Ichi Ban and Caro, are already diverging with deeper keels and taller rigs plus a bit more structure. It will be easier to have “standard” Super Series boats that can do everything.

‘Some owners want to race outside the Super Series more than others so ideally a Super Series boat should be able to do anything and win anything. And that is possible. We all now agree within the technical committee – but the owners need to decide when.’
Andi Robertson