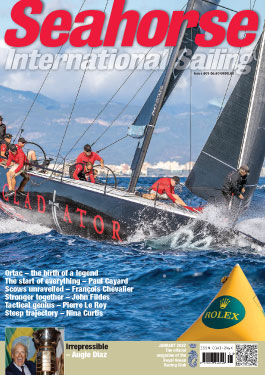 The right thing
A great race on the water but sadly that is not what this year’s Middle Sea Race will be remembered for. ROB WEILAND

Years ahead of its time
When the St Francis Yacht Club first launched its now legendary Junior Programme even they could not have guessed at the impact it would have. And it still does… PAUL CAYARD

Lucky AND good!
What can you say about a world-class one-design sailor whose first major title was won in 1971 and his latest last month… CAROL CRONIN tries to keep a straight face interviewing AUGIE DIAZ

A bold experiment
ROBERT CLARK would end his yacht design career as a pillar of the establishment. It certainly did not start out that way… CLARE MCCOMB

The simple moves that soon add up

Nobody does it better (really)

When size is your friend

Update
Grand strategy or simply disorganised… they told us a bit but in all honesty they did not tell us much about America’s Cup 37. Winning and runner-up, both sides of a ‘close’ TP52 Worlds in Palma, the best possible debut for women sailors in SailGP (then they hit the lab-leak)… as well as another round of passport adjustments among the teams. JACK GRIFFIN, FRANCESCO BRUNI, PHIL ROBERTSON, NATHAN OUTTERIDGE, ROB KOTHE, BEN AINSLIE, HANNAH MILLS, JAMES SPITHILL (obvs), RUSSELL COUTTS, TERRY HUTCHINSON

World news
King of all he surveys, the confidence and skill of meteorologist and sailor supreme PIERRE LE ROY. Not quite there yet for TANGUY BOURROULEC, good news for NATHAN OUTTERIDGE in Auckland… but leaving everyone else in America’s Cupland still grumpy, and another blow for a round-the-world stopover, or rather not. NINA CURTIS… making the most of every single opportunity, as is ÑETI. And staying upright in the USA. CARLOS PICH, PATRICE CARPENTIER, IVOR WILKINS, DOBBS DAVIS, BLUE ROBINSON, SAM GOODCHILD

Maxis – Better than hoped for
A short season but definitely a good one. ANDREW MCIRVINE

TP52 Super Series – The word according to Cowie
A popular win for Sled and a look at some of the below-deck tricks that make a TP52 tick. SIMON FRY, CHRIS HOSKING… and DON COWIE!

RORC – A clarification
This time around we are not best pleased. JEREMY WILTON

Sailor of the Month
Thwarted at the last… back with another chance!