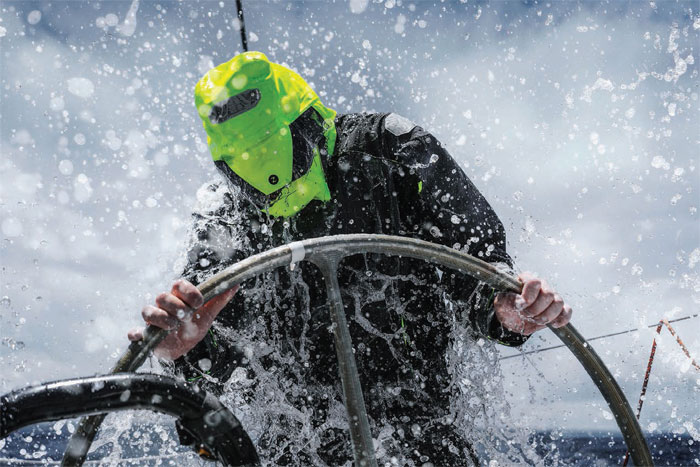 In little more than 12 months’ time Chris Nicholson will have his seventh go at winning the Ocean Race (née Whitbread). And he’s not going to let any leaky clothing slow him down...

After more than 50,000 miles of testing and refinement, Zhik has launched its new OFS800 offshore range. Zhik set out to create the most breathable offshore gear yet seen in the sailing world, and breathability is a cause close to Chris Nicholson’s heart – not to mention his skin.

From 2001 to 2017, Nicholson competed in all six editions of the Volvo Ocean Race. It’s a race he’s yet to win, which is why Nicholson will be leaving no stone unturned in his quest for victory as skipper of W Ocean Racing in next year’s Ocean Race. ‘The turnaround time between race legs is so tight that if you get your clothing choices wrong, you can end up with some nasty rashes and infections that might not heal in time for the start of the next leg. Breathability isn’t just a comfort factor, it’s a health factor.’

Allowing the skin to breathe is one thing. The more widely understood factor which remains as important as ever is the ability to regulate body temperature. ‘This got harder for me as I moved into the skipper’s role,’ says Nicholson. ‘When you’re up and downstairs, getting firehosed on deck and then down to the nav station but you haven’t got time to take your gear off before you get up on deck again - that’s when you really struggle to regulate your body temperature. That’s why I’m fully into what Zhik is doing with the new OFS800 range, because higher levels of breathability are what we need from offshore gear.’

OFS800 uses eVent membrane technology, widely used by military, safety and fire-firefighters worldwide for its exceptional breathability and durability, which has been adapted for ocean sailing. As body heat varies during different activity levels its extreme breathability comes from its ability to dynamically regulate temperature through very fast moisture transfer.

Main picture: Zhik has launched a brand new range of high performance ocean sailing gear after 50,000 miles of testing and a massive R&D process with Royal Melbourne Institute of Technology. The resulting OFS800 range is claimed to take breathability to a whole new level

The big name in breathable technology, known to everyone in the offshore world, is Gore-Tex. So, can Zhik really expect to surmount that mighty reputation with eVent? It’s a big name in other markets, but how will eVent stand up to the salt-water challenges of ocean sailing? Zhik’s head of design and production, Drue Kerr, is confident in the superior breathability of eVent fabric and stands by the extensive testing that’s been performed. ‘Along with the rest of our team, I was there when we started testing prototypes in the 2017-18 Volvo Ocean Race. We were working really closely with Team AkzoNobel and Dongfeng Race Team, and at least one of our design team was with the sailors at every single stopover, trying to get an understanding of how the gear was performing and where we could improve. At one stopover we even fitted temperature probes to each of the sailors and made them row on a rowing machine while wearing all their offshore gear. From that testing we got a whole lot of data and feedback that has really helped inform the developments we made for this new range.’

Zhik takes pride in looking beyond the obvious, and the decision to go with eVent is one such example of moving beyond the traditional bounds of the marine industry. ‘eVent has its own membrane technology which is already quite prevalent in the outdoor industry. We tested it against GoreTex and all the other big-name membranes out there and eVent was the best one for our particular purpose.

‘It was a massive process which we carried out in partnership with the Royal Melbourne Institute of Technology (RMIT). RMIT has a world class material research department where we developed our own bespoke machines to test the durability of fabrics and membranes that replicate abrasion, bumps, hits and everything to ensure that not only were we getting the right breathability, but durability as well. Waterproofing, breathability and durability are three attributes that don’t like each other. You aim for more of one and you end up with less of the others, but eVent were prepared to work with us to achieve the highest levels of all three of these vital attributes.’

Kerr says eVent’s desire to trial different approaches set them apart. ‘With other membrane makers you’re buying off the shelf and have to work with what you’re given, to try and make it work as best as you can. With eVent we got a much higher attention to detail.’

The result of this exhaustive R&D is the Direct Diffusion membrane. It’s designed for maximum breathability and is a “dry system”, meaning it will keep you dry and comfortable in the widest range of temperatures and conditions; it doesn’t have to be damp and humid inside for the fabric membrane to work effectively. 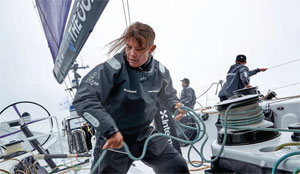 Above: one of the main proving grounds for Zhik’s new offshore gear is the uncompromisingly tough environment of The Ocean Race. Zhik’s very latest ‘head lock’ hood design (below) plus the flexible, fog-resistant Hydrovision visor are two unique key features in the OFS800 jacket and smock 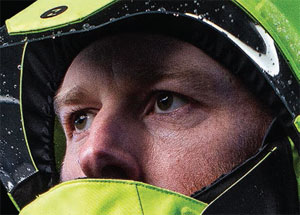 Nicholson and other sailors in the forthcoming Ocean Race will require greater agility and balance around the boat as it bounces and shudders its way from wave top to wave top. OFS800 is less bulky than traditional offshore gear, with more emphasis on ease of movement. ‘Our gear naturally has a slimmer profile,’ says Kerr. ‘Most offshore gear is quite boxy and oversized. Obviously, the purpose of that it is so you can layer up with mid-layers and base layers for those conditions. You can still wear those products underneath our gear but it’s articulated in particular joints at the knees of the elbows and the hips. There are no buckles and it’s all quite low profile so you're more agile, not as cumbersome. It’s a more ergonomic design and sailors notice that as soon as they start wearing it.’

OFS800 features a number of innovations as well as patent-pending design elements that are a real break with the industry norms.

Head lock hood design
Zhik’s new “head lock” hood design, featured on the OFS800 jacket and smock, engages the sailor’s head with the hood so that it always follows your head movement. With a unique gusseted forehead lock and three-point adjustment, wherever you look, the hood moves with you and prevents wind and water ingress.

Hydrovision visor
An integrated flexible, fog resistant and anti-kink 180° Hydrovision visor replaces the conventional peak and provides improved vision whilst protecting the face from the elements. The combination of the hood, visor, high offshore collar and a fully adjustable, shaped face shield – lined with Zhik’s Hydrobase fast-drying fleece – creates a highly effective protective barrier in even the worst of conditions.

Quick-seal neck closure
The OFS800 smock has a patentpending, quick-seal neoprene neck closure, with an inner gusset that is quick to operate and very comfortable. The waist is sealed with an adjustable neoprene skirt that allows flexible and free movement whilst remaining watertight.

Nicholson says he’s never come across another company so committed to challenging the status quo as Zhik. ‘The guys really do listen when we tell them about what works and what doesn’t work from our point of view as sailors,’ says Nicholson, a double Olympian and three-time 49er world champion.

‘They’re not afraid to try new ideas, quite the opposite, they’re really committed to identifying a problem and then coming up with the best way of solving it. I’m always asking for more from them, and they always listen.

‘If you look at every other industry, every other business in the world, there should always be an up-andcomer looking to take the place of the biggest player. It's no different to any record in the world that is there to be beaten, and usually does get beaten. Gore-Tex has been a terrific product, but it's been around for a long time. I think what we're looking for now is a product that can breathe more, that can be lighter and be more comfortable. That's what we're aiming for, and I’m confident Zhik is well on its way to getting there.’ The OFS800 range is available via zhik.com or your nearest Zhik dealer.