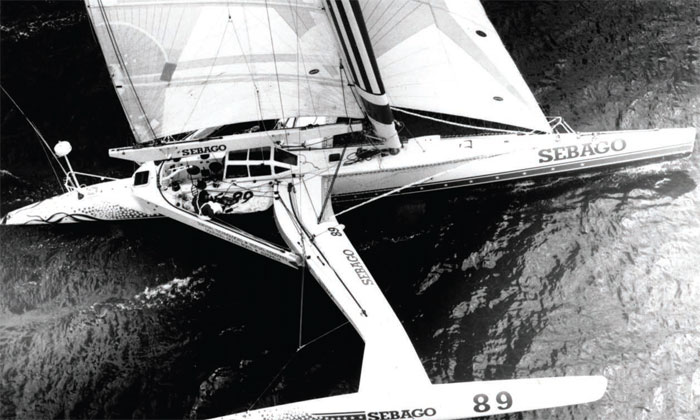 The role that the Royal Western Yacht Club has played in the development of shorthanded offshore sailing speaks for itself. From founding the Observer Singlehanded Transatlantic Race (OSTAR) in 1960 to the doublehanded Round Britain and Ireland Race that kicked off six years later and then the TwoStar transtlantic, three key events that not only shaped the racing world but provided the catalyst for a wide and far-reaching range of events elsewhere. Yet at times, success has brought its own challenges for this West Country club.

‘The OSTAR simply got too big for the club,’ says Rear Commodore Oceanic, Adrian Gray. ‘We might have 700 members, but aside from a handful of full and part-time employees we’re run by enthusiastic and experienced volunteers. And while we have all loved seeing successful events draw in the professionals and their impressive machines, we also know that the club is and has always been about providing offshore challenges for grassroots sailors.’

This down to earth approach coupled with the club’s innovative spirit has created a fascinating programme for the future. The 2022 season will see the 60th anniversary and next edition of the OSTAR get underway on 15 May followed closely by the Round Britain and Ireland Race starting on 29 May. Both are wellknown events that continue to evolve.

Main picture: the OSTAR in its commercial heyday attracted professional racers with big budgets and cutting-edge boats like Philip Steggall’s hydrofoil tri Sebago which finished fourth in 1988. The race has now gone back to its roots and most entrants are amateurs in cruisers or cruiser-racers

‘When the club sold the event rights to Mark Turner’s Offshore Challenges it kept the OSTAR name and when it comes to the competitors the event has in many ways gone full circle,’ he continues. ‘The fleet for next year’s race will range in size from 28ft to 60ft and will be sailed by amateurs looking to achieve something special. Their boats are mainly cruisers or cruiser-racers so we look forward to the true spirit of the race being back with us.’

The double handed Round Britain and Ireland Race is not simply famous but has become legendary for the challenges that the course places on the crew. But times change and while the event continues to live on in the minds of those that have completed it, such notoriety doesn’t ensure future success. Here the club has worked hard to make sure that the race fits with modern life.

‘We have spent a great deal of time listening to competitors and have made some key changes for next year’s event. For starters, to trim down the time it takes to compete there will be three stopovers rather than four. The first will be Galway which replaces Kinsale. This will present some interesting tactical challenges when it comes to deciding which side of the Aran Islands to go as you will have to pass on the same side going out as you came in.

Further on, the Barra stopover has been discarded while Lerwick stays, then the route back sees Blyth in Northumberland replacing Lowestoft. The net result is that each of the legs is now around 400-650 miles, we lose 48 hours of stopover and the race is now more accessible to the general public.’

One key change is the number of crew. This time, in addition to double handed, four person crews will be allowed, plus teams can change up to 50 per cent of their crew at the end of one of the legs if they wish to. ‘Weaving a major event into a year full of other commitments can be tricky so this is intended to make it easier to take part. We are also keen to tempt owners into looking at short-handed sailing, this we see as a really nice compromise.’

Some classic offshore races aren’t as easy to modify. Moving the Fastnet finish from Plymouth to Cherbourg was keenly debated. What isn’t in doubt is the enthusiasm for racing around the most famous lighthouse in the racing world. Here, the RWYC have created two events.

‘Next summer sees the second edition of the Original Lonely Rock Race which, in conjunction with the Royal Victoria Yacht Club, starts off Ryde in the Solent, rounds the Rock and finishes in Plymouth,’ said Gray. ‘The second event, which will be in August 2023 and also run for a second time, is the Plymouth Fastnet 500 which starts and finishes in Plymouth. Then in 2025 we will return to the Royal Victoria Yacht Club to celebrate 100 years of the most famous of all racecourses.’

The club’s strategy is for a four-year cycle of key events where each year has either a 500 or 600-mile offshore race running alongside an oceanic race of 1800-3000 miles. And in 2023 it’s the introduction of a big one, The Round Iceland Race. ‘The main focus is for solo and double handed crews on a course that will start and finish in Plymouth,’ Gray says. ‘When you plot it out the length of this course is within a few miles of the OSTAR so it will be a serious challenge.’

‘There are so many things we could do with this race. We are also looking at options for a Reykjavik finish for those who wish to stop. Whilst this is primarily for solo and double handed sailors, we might include a class for fully crewed boats should there be the demand.’

New partnerships with other clubs and organisations have also been formed. One of these is with Marco Nannini and his Global Solo Challenge to offer GSC-approved courses that can be included in the mile-building qualification process. Another has involved engagement with the Imoca class and specifically the pre-2007 Open 60 fleet to offer racing on established courses for sailors who want to realise a lifelong ambition or use the experience as a stepping-stone to bigger challenges such as the Vendée Globe. 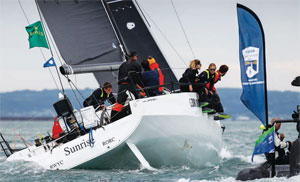 Above: the JPK 1180 Sunrise (skippered by ex-RWYC cadet Tom Kneen) won the inaugural Lonely Rock Race from Plymouth to Fastnet and back in 2020.
Below: the Round Britain And Ireland Race is now 48 hours shorter and has fewer stopovers but Lerwick in Shetland is still one of them 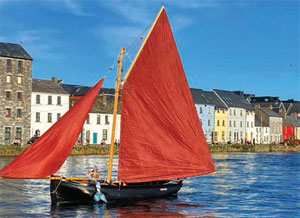 The creative thinking in Plymouth has even encouraged participation at neighbouring club events. ‘The Southwest Offshore Group Series (SOGS) was formed recently and involves 18 sailing clubs to promote and develop southwest offshore racing with a regional series of 14 races,’ continues Gray. ‘The Royal Western Yacht Club is just one of those involved. Teams can choose which races suit them best and are most convenient, while at the same time helping to build a bigger overall event. When they race away from home the boat receives weighted points to encourage local teams to move about and enter a wider range of regional offshore races.’

Making a season programme easier to plan and more rewarding has also been at the heart of a new development with Polish sailing. ‘Plymouth is twinned with Gdynia and we have had a lot of contact with Visit Poland and Love Poland through their Volvo 65 and 70 campaigns. What surprised us was just how large the Polish offshore shorthanded scene is. As part of the twinning process we're planning to run a feeder race from Gdynia to Plymouth to help them engage with some of the events we’re running. Within Poland there are a number of ocean sailors from eastern European countries who we hope are going to bring some boats into the Gdynia to Plymouth race and ultimately into the RWYC oceanic programme.’

The commercial aspect of running such an ambitious schedule provides additional challenges for the club. ‘Whereas it has been common to talk of sponsorships in the past, we prefer to talk of partnerships. We look for partners that are going to work with us and for whom we can provide a platform for them to demonstrate to members why their products should be relevant to them and the sailing they do. It’s very much a two-way street. We are partnering with key sailing brands such as Henri Lloyd, B&G, Spectra Watermakers, Forestia foods, MailASail and others. We have a great platform for these brands to focus and develop within an active bed of competitors. Mutual feedback and partnership will help us all to provide a more rewarding landscape for all concerned’.

These and other projects at the Royal Western help to illustrate why the club continues to thrive, yet even so, a clear vision at a time when the sport and its participants are changing rapidly is arguably the most important factor.

‘The vision of the club is very much about getting back to its grass roots, which means getting back to supporting and running more shorthanded oceanic or long-distance races and continuing that appeal for owners who are looking for that sort of challenge. It’s not taking on the professional maxi racing teams of this world with their massive budgets, it's all about the club racer, Corinthian amateur or Category 1-3 level sailor who races seriously at weekends and wants to go further. We want this to be the club that they look at to take them to that next level in shorthanded sailing.

‘We will continue to pioneer short-handed oceanic racing in this segment and have ideas and plans of more challenges to complement the races we have today. In essence moving forwards just as the club did in its early days.’