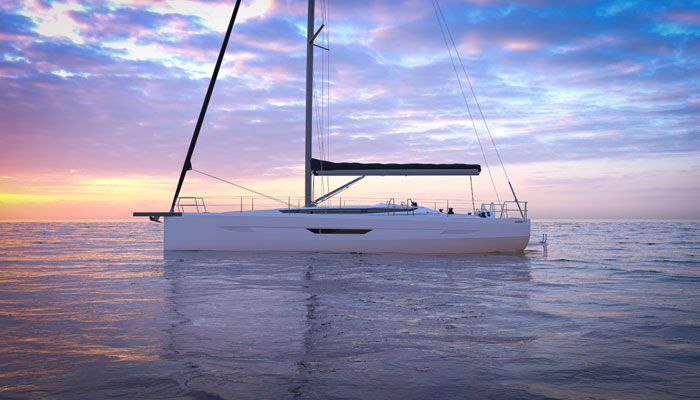 Elan Yachts’ E-Line range of performance cruisers has a brand new flagship. It’s been about five years since the last new model in the range was launched and the core concept has been significantly refined. So what’s new? Well, for starters Elan has set itself a very ambitious goal indeed: the new E6 is intended to be the fastest, lightest and stiffest 47ft production cruiser-racer on the market with a fully fitted interior. And as if that wasn’t enough, they’re also competing very strongly on price in a market segment that’s already crowded with well-established and highly regarded competitors.

‘We’ve been in this space since the 1980s and this is an evolution of our successful E-Line concept, not a redefinition,’ says Elan’s head of marketing, David Rajapakse. ‘In a way it’s back to our roots, because performance cruising is a fundamental part of Elan’s DNA. This is what Elan is historically known for. Our build quality is boutique-like, but this yacht also offers a different kind of performance – price performance. And we’re taking it to a whole new level in terms of design, technology, styling and usability. The racing version of the new E6 aims to be the fastest Elan ever and its aesthetics will be pushed to the next level by Pininfarina.’

Elan has also raised its game on the construction and build quality side of things. Its VAIL vacuum infusion process was already one of the brand’s key strengths, but all hull and deck materials have been comprehensively upgraded and the E6’s performance potential has been given a significant boost by the structural engineering expertise of Gurit. ‘The laminate plan and geometry have been pushed a lot further,’ Rajapakse says. ‘In plain terms, Gurit’s know-how and calculations have given us confidence and courage. They analyse every nook and cranny to calculate what we should reinforce, what we can remove, where we can shift focus. Also we have upgraded the hull/deck joint, especially at the stern, moving closer to a monolithic structure and thus creating a stronger, safer yacht.’

Main picture: What happens when you take a Humphreys hull and add industrial design from Pininfarina? You get Elan’s new 14-metre E-Line flagship, the E6 – announced at Cannes Yachting Festival (but previewed here first…)

One thing hasn’t changed in the development of the new E6. Humphreys Yacht Design is still in charge of the naval architecture, which builds on their previous success with this type of boat. ‘With Elan we really were one of the earliest adopters of twin rudders in a production yacht setting and with a more shorthanded ocean racing style influence,’ Rob Humphreys explains. ‘This proved extremely popular and very much suited the concept of performance cruising with a shorthanded or family crew, allowing a jump in performance, particularly reaching and downwind as well as upwind in stronger breeze.’

‘It is really this core concept that we have continued to develop and refine with Elan over a number of models and the E6 is the latest in this line of thinking,’ he says. ‘There is always refinement with each new model and the development of the E6 has been no different, an optimisation process consistent with the dual-purpose racer/cruiser ethos that has been the hallmark of the range for a number of years.’

A lot of effort has gone into CFD modelling and analysis to finesse the E6’s sailing performance and handling. ‘In this case we utilised our in-house panel code at the initial development phase to assess a range of candidate forms,’ Tom Humphreys says. ‘This comprises of running the hull forms across a matrix of speed, heel and leeway angles, which can then be read into our VPP to assess and compare each candidate’s performance. At the end of the day, the design of a production yacht like this must take multiple considerations into account, many of which extend well beyond the yacht’s performance as such, with plenty of give-and-take required between all members of the project team.’

Below: Active aft-quarter chines come into play when the E6 heels over, boosting the form stability of the hull. The waterline beam is relatively narrow to ensure good performance in light airs 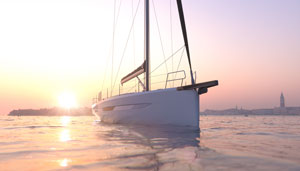 As always with cruiser-racers that have to fulfil a dual purpose, there will of course be a big difference in terms of displacement, waterplane and weight distribution between a race-focused E6 with a deep keel, open transom, tall carbon mast and other performance-enhancing features, on one hand, and an E6 with standard rig and keel that’s loaded with options, extras and equipment for cruising on the other hand. ‘We need to cater for both of these scenarios as of course we want every new production model to meet the needs of every expected owner profile, though this can of course get quite complicated!’ Rob Humphreys says. ‘I think this is where our offices long history in production yacht design really helps and provides us with a really good handle on how to manage these compromises.’

Elan’s E-Line yachts are renowned for their excellent performance in a fresh breeze, especially downwind, but this fourth-generation design with its notably high sail area : displacement ratio is also expected to be quick in light airs. ‘Light air performance, in its simplest term, is really down to the relationship between sail area and wetted surface area,’ Tom Humphries says. ‘While not as significant as some might think, you do pay a small penalty in this regard for twin rudders and through the more powerful hull sections that you are able to consider with twin rudders. Ultimately it is these features that are key to the brilliant power reaching performance and it really comes down to where the designer choses to balance these compromises.’

To boost its versatility across a wide range of intended use, the E6 hull has a bit more rocker than a full-on racer. ‘We do need to cover a wide range of displacements to cater for various users, from the more performance-minded day or racing sailor up to the more cruising-minded owner who is likely to require greater load carrying capabilities,’ Tom Humphries says. ‘In very general terms a yacht that is floating light on its lines will perform better than a yacht sitting very deep on its lines, so the heaviest expected configuration always needs consideration during the development of a production yacht design like this.’

HYD has also drawn the sailplan. ‘We have a relatively aft mast position compared to most,’ Rob Humphreys says. ‘J is slightly reduced by the under-deck furler, which brings the forward end of J aft relative to the bow, though the J measurement is still on the generous side relative to hull length.’

Below: The cruising setup includes a big bathing platform and stern boxes with a BBQ grill and fridge inside– great for enjoyment at anchor, removable for racing 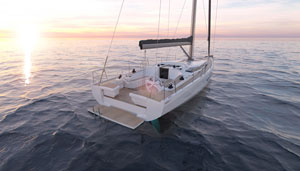 The deck plan, meanwhile, has been optimised by a team of experienced sailors, including former Olympic 470 sailors Mitja Margon and Tomaž Čopi, now regular competitors on the RC44 circuit ‘They mainly focused on fine-tuning of winch positions, deck equipment and running rigging,’ Rajapakse says. The styling of the deck, cabin top and cockpit has been given a strong Italian accent by Pininfarina, who have also delivered some practical refinements such as the sprayhood channel in the coachroof and ergonomic backrests in the cockpit.

So how light, and how fast, can we expect the new E6 to be? ‘Light ship displacement will be around 11 tonnes for the performance version, and we should see 8kts boatspeed upwind in anything over 12kts TWS,’ Tom Humphries says. ‘Reaching performance will very much depend on sail inventory, while downwind we should see double-digit speeds in mid-teens of windspeed.’ Just how well the boat performs in regattas remains to be seen, but’s worth noting that comparable models from most other builders are typically 1,000kg to 1,600kg heavier – which is roughly equivalent to the displacement of a standard E6 fitted out for comfortable cruising. ‘An average-equipped E6 with aluminium mast, cockpit teak, stern boxes and bathing platform will be about 850kg heavier than the Pure Performance version,’ Rajapakse says.

Construction of the prototype E6 is about to commence, and the model’s official début is due to be at Boot Düsseldorf in January, and sea trials will start in March on the Adriatic. Potential buyers will be able to sail the E6 at Portorož in Slovenia from April next year and delivery slots are available (at the time of writing) from the end of May onwards.