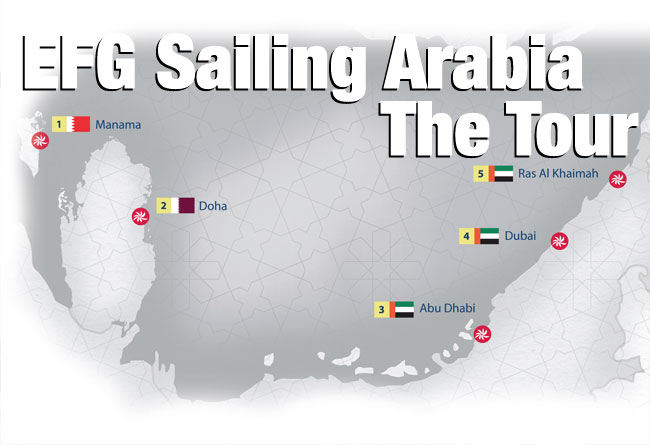 Imagine the Tour de France a la Voile transplanted to the Gulf and you have a reasonably accurate picture of EFG Sailing Arabia – The Tour.

In fact many of the Farr 30s used in the race originally came from the Tour a la Voile. This is perhaps why this four year old event has attracted several top competitors from France, such as Bertrand Pace, Hervé Gautier and Cédric Pouligny, enthusiastic Farr 30 sailors to a man, alongside international stars such as Sidney Gavignet, Dee Caffari and Neal McDonald, who last year enjoyed the fresh challenge of racing in the Gulf.

EFG Sailing Arabia – The Tour is the most ambitious of the ever increasing number of yacht races being laid on in the region, thanks to the efforts of Oman Sail. Oman Sail is a pioneering national initiative established in 2008 that is using the sport of sailing in a novel and ambitious way to rekindle the Sultanate of Oman’s maritime heritage, to foster Oman’s socio-economic development and to promote the country as a high-end tourist destination.

Oman Sail has really succeeded in putting the Sultanate on the international sailing stage through hosting the Extreme Sailing Series, the RC44s, last year’s ISAF Conference and, most recently, the Laser World Championships.

EFG Sailing Arabia – The Tour provides an opportunity for Oman Sail to comply with its principle remit of getting more Omanis out on the water and typically at least three domestic teams take part. For the last two years this has included an all-women’s crew, including four Omanis, led by Dee Caffari, plus another sailed by Oman Sail’s own Tour de France a la Voile team, which also comprises a mix of Omanis and westerners.

A secondary aim of the event is for it to become truly an inter-Gulf state sailing competition. In 2012, Saudi Arabia fielded an entry, while the 2013 race included a team of entirely UAE sailors from Abu Dhabi, skippered by Abu Dhabi national hero and Volvo Ocean Race crewman, Adil Khalid.

“Year one in 2011 was a test event with six teams,” Issa Al Ismaili, Oman Sail’s Director of Events explains. “In year two there was dramatic growth with five GCC [Gulf Cooperation Council] nations participating and for its third edition, it was more competitive and serious in terms of competitors, with more international teams. The ultimate vision is to grow the race in a sustainable way and we hope for it to become an international, world class event.”

Aside from it being a tough one design competition, EFG Sailing Arabia – The Tour is also a great way to see the best parts of the Gulf. It takes in all the places you might want to visit in the region, albeit using an unorthodox means of transport.

The 760 mile long course is divided into seven legs punctuated by two day stopovers. These usually include one day of in-port racing, while allowing crews enough time to recuperate and do some sightseeing. Over the course of the fortnight of racing, EFG Sailing Arabia – The Tour visits four countries – Bahrain, Qatar, the UAE and Oman - with three stops in differ emirates within the UAE - Abu Dhabi, Dubai and Ras Al Khaimah (RAK - where Alinghi had their base in 2009...) and three stops along Oman’s coast – Dibba, Musannah and Muscat.

The stopovers are also an interesting mix with, one of the one hand, the 21st century high rise metropolises of Abu Dhabi and Dubai and on the other the remote tranquility of Zighy Bay, the first stopover in Oman, where the Farr 30s are berthed off the unique Six Senses hotel complex.

To those unfamiliar with the Gulf, it might seem that the coastline is perpetual desert rolling into the sea and indeed for the first part of the race between Bahrain and Ras Al Khaimah, it is exactly this. However on arriving in Omani waters, as the crews prepare to pass through the Strait of Hormuz and out into the Gulf of Oman bound for the Omani stopovers, the race rounds the Musandam Peninsula where the mountains rise up 2,000m above sea level. The Peninsula has fjords and is effectively the Gulf’s answer to Norway.

And don’t think that sailing in the Gulf is all glass-outs and fickle sea breeze. The start of the 2012 had to be postponed because there was too much wind.

Dee Caffari says of sailing in the Gulf: “It is beautiful, but completely different. Forecasts are a little bit hit and miss, you can’t get the confidence you’d have in a GRIB file in Europe - the weather just kind of happens. It is busy with shipping, but not to the volume you’re used to. The water is a beautiful colour and the sun obviously helps – a little bit of winter sunshine sailing.”

She adds of the course: “From Qatar towards the UAE you pass through a lot of the oil fields so there is never a dull moment. Otherwise it is like sailing along a big beach. Once you get around the top corner of Qatar you are sailing in 4m of water and the only height you see are the cities that have been built. It is the same en route to Abu Dhabi and Dubai – flat and then the city sat there. But as you move on from RAK and you go round back into Oman, then you get the dramatic cliffs and the coastline looks spectacular.”

The Strait of Hormuz, familiar usually from war reports, is as close as the race gets to Iran (28 miles at its nearest) and the sailing instructions typically keep boats 10 miles off the Oman coast, sailing down a corridor, the fleet accompanied by an Omani naval ship for added security. “That makes you feel quite confident,” Caffari continues. “It is a stunning coastline - it gets all rocky there - and it is exciting to say ‘I’ve sailed through the Strait of Hormuz’ because normally people only hear about it on the news.”

For those looking to take part, EFG Sailing Arabia – The Tour offers the opportunity for some serious racing, in a part of the world that many have still to visit. The Oman Sail-owned Farr 30s (which are available for charter) remain as exciting to sail as they always have been. But perhaps best of all, being held in February, the event allows northern hemisphere sailors the opportunity for some competitive winter sailing that is an intriguing alternative to Florida, the Caribbean or Australia and all just a seven hour flight away from London.

Click here for more information on Sailing Arabia - The Tour »