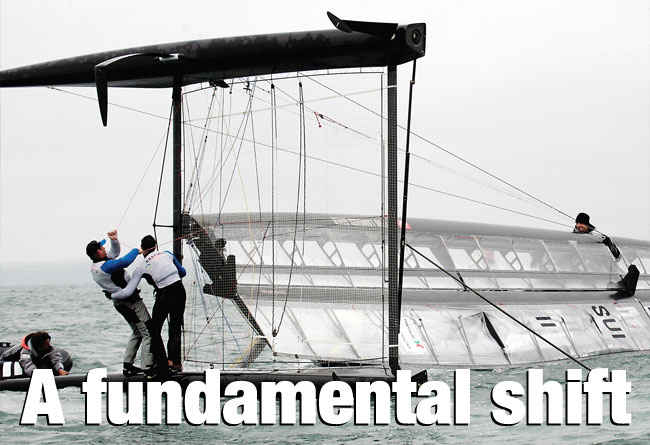 You won’t find many sailors who will dispute that the 72ft catamarans used in the most recent America’s Cup were inspired by the C-Class catamarans. In fact, if you change the units from feet to metres you are not far off a direct match. The 25ft C-Class has a bit more length in relation to its 14ft beam than the 22m by 14m AC72, but the parallel is there. And if you happened to have been at the 2010 International C-Class Catamaran Champ - ionships in Newport the recruiting of C-Class talent by potential America’s Cup syndicates was somewhat frantic. It is then fitting perhaps that the transfer of knowledge has come full circle. For this latest C-Class championship in Falmouth, England the C-Class boats have taken their cue from the successful flying-boat AC72 devel opment by Team New Zealand and Oracle.

C-Class design has been, for most campaigns, a backyard build-it-and-test-it process, but it would be unfair to ignore the parts of each programme that have seen some serious science. In our own Canadian programme Fred Eaton, owner, helmsman and experimentation enthusiast, has always pushed the technical side and we have incorporated some Finite Element Analysis (FEA) of crossbeam attachments and Computational Fluid Dynamics (CFD) on hulls and multi-element foils.

But in reality this pales in the shadow of what an America’s Cup syndicate can muster up. Consequently C-Class designers now have the opportunity to analyse what the big boys are doing and can use this knowledge in their own development of the 25ft winged cats.

What developed in San Francisco during the America’s Cup was an eyeopener for all sailors. Winged catamarans that could fly – lifted up by hydrofoils on their L, S or J-shaped daggerboards and, at least most of the time, could remain foilborne, ignoring the fact that this was an inherently unstable situation. The task then for the C-Class was to see if the technology could work at a smaller scale with only two crew to manage the beast.