Not all sails are created equal 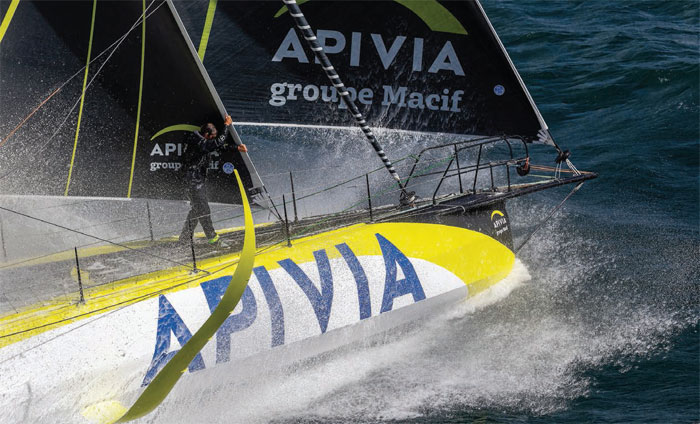 North 3Di is an indispensable building block of championship projects. JB Braun and the senior North sail designers team up to explain how they deliver custom solutions using 3Di technology

North Sails 3Di made its America’s Cup debut in the 2010 Deed of Gift Match, with Alinghi as the first team to fly "black sails." A year later, 3Di proved worthy of "Life at the Extreme" in the 2011-12 Volvo Ocean Race. Two iconic moments in sailing history that forever changed the way we think about sail materials and construction.

To the sailing world, 3Di is a toptier range of products. But to the North Sails design team, 3Di is much more than a product range; it is a vast menu of materials with different properties, coupled with a unique manufacturing system that allows the flexibility needed to customise sails to precisely fit the specific requirements of any type of sailing.

Just 10 years since 3Di was introduced as a niche solution for grand prix sailors, it has become an indispensable building block of championship projects. Case in point: in the last year alone, 3Di powered the top three America's Cup teams and 22 Imocas, including the first eight finishers in the 2020-21 Vendée Globe.

Main picture: North Sails 3Di powered Charlie Dalinʼs Apivia to line honours in the last Vendée Globe ... and also the next seven boats to finish. Foils have made sails even more critical in ocean racing than ever before, massively reducing hydro drag which means that gains in aero force have a much more significant effect on performance

As North developed their sail technology, the sport as a whole has seen a huge surge in innovation and a renewed interest in foils. Foils create a new relationship between the hull and the engine above deck, by drastically reducing the hydro drag. As a result, any gain in aero forces has a much larger impact on total performance.

If you ask Emirates Team New Zealand lead sail designer Burns Fallow what’s changed, he’ll quickly answer, ‘Just about everything. For the last 100 years, hulls dragging in the water have slowed our sails down. With foiling, the boats are now catching up to the sails.’

Sails can no longer be an afterthought. Weight is more critical than ever. Sail shape, stretch and camber control need to be precise and predictable to match lift-off power to the foil package and to reduce aerodynamic drag as soon as the boats hit their incredible stride.

All the North-powered America’s Cup and Vendée Globe projects began with a common set of resources: a North sail designer; and access to the powerful North Design Suite and 3Di sail technology. 3Di is unique, and the process and its benefits are not replicated anywhere else in the industry.

Sail shape set on a full-sized mould is a signature of the 3Di manufacturing process, but it’s the use of spread filament tapes that represents generational advancement beyond other existing technologies. With 3Di, North Sails can offer a customisable power solution for steady, stable, and reliable power for two very different platforms that each challenge sail shapes and range in a more complex way than ever before.

An obvious benefit of spread filament tapes is the elimination of Mylar. By using spread filament tapes, North Sails has eliminated Mylar from 3Di sails, removing the parasitic weight and a fragile, UVsensitive structural element that contributed very little to overall performance. Moreover, when you remove Mylar, you also eliminate the risk of delamination. This is essential to the success of an offshore sail, but equally crucial to an AC75 that thrives on being light. 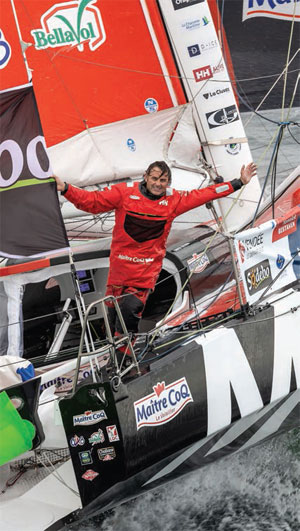 Above: the overall winner of the Vendée Globe on corrected time, Yannick Betaven on Maître Coq, was also powered by North 3Di.

An equally important, but lesser well-known benefit, is that spread filament tapes provide North Sails more freedom on matching materials with requirements. Sr. sail designer Glenn Cook explains, ‘Materials have unique qualities for different applications; you can use the right material and exploit its properties to the maximum for your desired use.’

The magic of 3Di begins when the bundled yarn is reverted back to micron-measured filaments, fully coated in thermoset resin, and then spread in a single layer to create 200mm wide tapes. North Sails creates 3Di tapes from four materials: Polyester, Aramid, UltraPE and Carbon. Some tapes are designed to reduce stretch, some are designed to have added tenacity while others are able to stretch and recover.

Let’s compare the AC75 sails, engineered for the highest possible shape holding, with an Imoca inventory, which is engineered to withstand a non-stop solo trip around the world.

The America's Cup is the sport's most aggressive demonstration of innovation within sailing. The teams and their equipment work in a pressure cooker and with zero margin of error. In the 36th America's Cup, Emirates Team New Zealand, Luna Rossa Prada Pirelli, and Ineos Team UK hoisted customised blends of 3Di RAW carbon-based tapes engineered for the lowest weight and best shape holding.

The Imocas (and Ultims and VO65s) have very different requirements. These skippers need their sails to carry them quickly and safely around the world, while withstanding constant abuse—, whether it's the extreme sun and heat of an equator crossing, or a charge through the Southern Ocean at up to 40kts of boatspeed. The offshore race conditions of the modern era demanded 3Di 760 (either RAW or Endurance) upwind sails, and 3Di Downwind 700, both Ultra-PE-Aramid 3Di tape layouts.

While the reward of lowest-weight, zero margin of error outweighs the risk on an AC75, minimising failure is the highest priority on an Imoca. 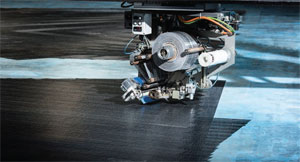 Above: the 3DI manufacturing system is unique in the sailing industry.
Below: by using spread filament tapes, North Sails has eliminated Mylar film from 3Di sails making them stronger, lighter and less UV-sensitive while also increasing reliability by removing the risk of delamination 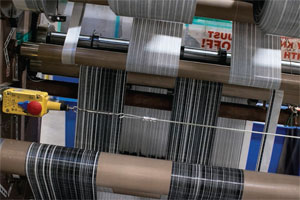 Before 3Di, it was widely accepted that the formula for high performance was, simply, more carbon. This longheld belief was disproven during the Volvo Ocean Race 2011-12, when the relatively new technology was given a heavy remit - to carry six of the seven boats 40,000nm, cross the equator four times, and encounter boatbreaking conditions. With minimal sail damage, 3Di 760 exceeded the expectations of both the competitors and North Sails. And simultaneously challenged the idea that if you wanted to go faster you’d turn to carbon to build a lighter sail and accept the risk of it breaking when subjected to extraordinary shock loads or flogging. Suddenly, after the race, it was evident that performance no longer came at the expense of reliability.

By replacing carbon with Aramid, North Sails is able to increase reliability and durability without increasing weight. ‘Carbon degrades quicker than Aramid, so shapeholding overtime is better with Aramid,’ says Gautier Sergent, head of R&D at North Sails France and the lead sail designer for Ineos Team UK. He is also the designer of record for the VO65. ‘Aramid is better for durability to weight ratio.’

And 3Di construction creates a sail structure that delivers near identical shape holding performance. In a controlled test that involved folding the material 100 times, a carbon sail maintained only 56 per cent of its initial modulus, whereas an Aramid- Dyneema sail retained over 90 per cent of its initial modulus. So, while carbon based 3Di RAW 880 or 870 sails are recommended for fully crewed inshore racing teams, it isn’t the best choice for boats racing in less controlled environments.

What's next for North 3Di?
‘An area that's going to be interesting to come out of the 36th America's Cup is the material menu we have at North Sails," says JB Braun, head of design and engineering. ‘Every material has different properties. How these different kinds of materials are used and what they were asked to do on the AC75s will be applied to future North Sails products. ‘We might be using different types of material in new ways to achieve that added range. For example, we build carbon fibre sails and that's the primary strength material, but we also use different types for different reasons. The new waves of innovations for 3Di will come from further exploring the complex relationship of the different materials in the composite and how they're working together.’