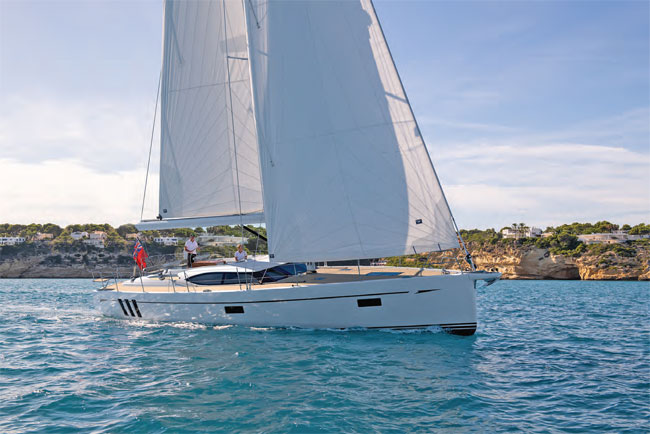 The Oyster 495 cruising yacht is a major milestone in more ways than one. It’s the first entirely new model launched by Oyster since it was taken over three years ago by Richard Hadida, who has refocused Oyster Yachts on its core values. It’s the first new ‘sub-50ft’ sailing yacht from Oyster since 2007 and a lot of big-boat innovation has trickled down and been built in. And it's the first Oyster in a long time that’s been developed with the involvement of the marque’s founder, Richard Matthews, who rejoined Oyster’s board of directors last year. There’s clearly some pent-up demand, as six 495s were sold off plan before the first layer of laminate went into the mould a few weeks ago to begin the build of hull number one.

‘It’s a completely new Oyster,’ says Paul Adamson, Oyster’s chief commercial officer. ‘She is designed to appeal to younger owners and she’s full of innovative features. It’s a balance between preserving Oyster’s core values – safety and the ability to go anywhere in the world in luxury and comfort – while introducing benefits of modern, contemporary design. The hulls are lighter, yet incredibly robust with more emphasis on performance for excellent daily passage-making.’

Humphreys Yacht Design has drawn all Oyster hulls for the last 25 years, gradually building up data and knowledge that informs their designs. ‘The big step change came with the 885 and introduction of twin rudders,’ Tom Humphreys explains. ‘That allowed us to draw more powerful sections and carry more form stability, enabling us to subtly increase sail-carrying power with respect to displacement, resulting in quite a significant leap forward in performance without losing any of the key characteristics of high stability and comfortable motion which are so important in a blue water cruising design.’

‘The twin rudders are phenomenal,’ says Adamson, who skippered the first Oyster 885 around the world in the inaugural Oyster World Rally. ‘They operate in a freestream and that reduces drag and gives superb directional stability which also unloads the helm, which in turns unloads the autopilot.’

Main picture: the 495 is the first completely new design from Oyster since Richard Hadida took control of the marque and refocused it on its original core values. As well as being the first new sub-50ft Oyster in 15 years, it’s also the first model in a long time that has been developed with input from Oyster founder Richard Matthews – which all adds up to an impeccable pedigree

The design brief for the 495 was ‘very much a no-compromise, luxury blue water cruiser and an extension of the existing Oyster range,’ Humphreys says. ‘At this size the design extends into a very competitive area of the market and a huge amount of research and development was conducted by us and in the in-house Oyster team to find the sweet spot in terms of size for this new model.’

So what’s different? The 495 has a totally flush, uncluttered deck forward of the mast, a feature that was previously reserved for the larger models in the range. The sailplan is non-overlapping, with a 105 per cent Solent headsail that’s easy for a shorthanded crew to tack and gybe. The jib sheets have been moved away from the guest cockpit. But the 495’s strongest suit is arguably the sail-handling systems, which Oyster boldly claims are the most comprehensively automated on the market.

‘We’ve been working with Seldén on an electric-powered automatic outhaul that can be tensioned or slackened at the touch of a button, rather than on a winch,’ Adamson says. ‘Larger Oysters have hydraulic rams to do that but we wanted to keep hydraulics off this boat.’ With electric in-mast mainsail furling, electric sheet winches and electricpowered headsail and code zero furlers, almost any sailing manoeuvre can be done singlehanded from helm at the touch of a button.

To optimise the cockpit for ocean cruising, it is split into three separate zones. The forward part is for guests, designed for relaxing but also for efficient watch keeping. The helm stations are separate and completely self-sufficient, with secure footwells and seats with solid backrests. Aft of the twin helms is a spacious, uncluttered aft deck that can be useful for entertaining. ‘There’s a really easy flow-through from one area to another,’ Adamson says.

Great care has been taken, however, to preserve Oyster’s core DNA. The new hulls still have excellent directional stability, for example. ‘It’s a big advantage for ocean cruising,’ Adamson says. ‘And if you get caught out with a bit too much sail up – which we all do from time to time – it’s no problem at all.’

The same goes for motion comfort, which is crucial on long passages, so the 495 does not have hard chines in her aft quarters like many other Humphreys designs. ‘For a moderate to heavy displacement design so much of the stability comes from the displacement itself, enabling more gentle lines and volume distribution along the yacht’s length,’ Humphreys explains. ‘Which is a benefit in terms of minimising wetted area across a range of heel angles and softening motions in a seaway compared to a more aggressively shaped hull form with chines.’

Excellent ergonomics is also part of the core Oyster DNA. The 495 is designed to be as comfortable as possible for a crew that may spend weeks heeled at 20°, which informs everything from the angle of the cockpit table corners to the shoulder clearance in the companionway. ‘We built an exact full-scale mockup of the boat from cockpit to transom.’ Adamson says, ‘to ensure that moving around the boat feels completely natural in a seaway.’ 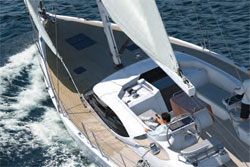 Above: the deck saloon provides a sheltered lee for the 495’s passenger cockpit, reducing the need for a sprayhood. Below decks it creates a magnificent bright and airy living space.
Below: the hull shape by Humphreys Yacht Design is optimised for motion comfort and sea-keeping, directional stability, high load-carrying capacity and balance. It’s also a lighter displacement yacht than the previous generation of Oysters with a greater emphasis on performance 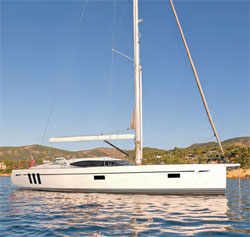 Another of Oyster’s USPs, the ability to carry a good payload, has also been preserved. The 495’s full-bodied hull is designed to carry 2.5 tonnes of kit and stores on an ocean passage with a further 1.5 tonnes of fuel, fresh water and other liquids – without a significant effect on boatspeed, handling, motion or balance. You can’t say that about many yachts of this size.

‘We used our in-house design tools to develop and refine the hull,’ Humphries says. ‘However, in many ways the core naval architecture is the real driver in the development of our Oyster designs to facilitate their high load-carrying capability and ability to cover the range of rig and keel options on offer and the various optional extras that can result in some pretty big variations in displacement and centre of gravity.’

A lot of thought goes into things that other builders leave owners to figure out for themselves, like the boom preventer and the headsail poling-out system. ‘A huge number of blue water sailing miles have been fed into those setups, making sure they work flawlessly from the cockpit,’ Adamson says. ‘And there has to be a manual backup for everything.’ Despite the proliferation of automated, electric-powered systems, everything has been designed to make maintenance as simple as possible. There’s a full-height door into the engine room, where everything is laid out for easy access and clearly labelled.

The same thinking informs all aspects of the yacht’s interior. The U-shaped galley is a secure, wellcontained and practical configuration with excellent ventilation thanks to the front-opening saloon windows. And the large, forward-facing chart table is another key feature. ‘We know that most people spend very little time navigating with paper charts nowadays, but many of our owners have a business to run and they need a place to work from,’ Adamson explains. ‘And a chart table is the best place to fit modern comms equipment like a computer and satellite phone.’

A full-beam master cabin is another part of Oyster’s core DNA and the three vertical windows have become a signature feature of the brand. ‘They let in a huge amount of natural light and keep you connected to the outside world,’ Adamson says.

The electric-powered, cassette-style bathing platform is a new feature. It makes good use of the space between the twin rudders and frees up stowage space in the lazarette. Adamson explains 'the cassette is more versatile than a traditional fold out transom platform. For example, When you’re berthed stern-to a low dock, it can be used as a passerelle – you extend out just the amount that’s needed.’

Renewable power sources are of course available. To generate sufficient power for all systems on passage, Oyster uses a combination of solar panels, a Watt & Sea hydrogenerator and quick-charging lithium-ion batteries. ‘We are looking at all sustainable options such as hybrid drives’ Adamson says. ‘We’re very focused on the green agenda but very clear that we don’t want to greenwash. Sailing yachts are fundamentally a hybrid and we think there’s a growth opportunity as the motorboat market starts to shift back to sail.’