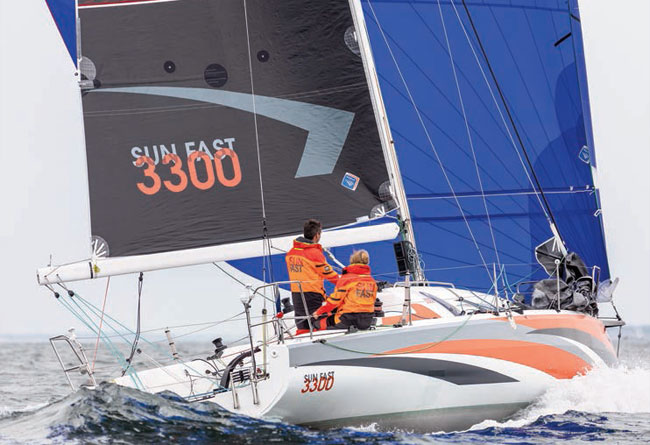 No less than 70 Sun Fast 3300s have been built, with fleets in the UK, France, Norway, Australia and the USA. As many as 15 will be on the start of the Fastnet later this year. Being a veteran double-handed campaigner himself, Nigel Colley of Sea Ventures in Swanwick, UK, will be ready to support any and all who are interested in double-handed sailing, this newest and most exciting sector of our sport.

Whether an aspiring Olympian, a keen amateur tired of full-crew racing, a couple looking for a new way to enjoy sailing, or any other number of different permutations, the Sun Fast 3300 rises as the perfect choice for two-handed sailing. Its clever full-bow hull design from designers Andrieu and Verdier extends waterline length, and the water ballast tanks add to stability. The generous sail area set in the large foretriangle both reduces weather helm and gives plenty of versatile sail power when needed. Large bowsprit-borne asymmetrical spinnakers and Code Zeros in the downwind sailplan propel the boat at impressive offwind speeds.

To say the growth in popularity of the short-handed racing scene is brisk is, by now, almost a cliché. Expanding beyond the traditional arenas of interest around La Manche, and not counting the pro and semipro enthusiasts who are already hooked, there are four key factors that have helped propel this trend worldwide towards new participants:

Main picture: the Sun Fast 3300 is a remarkably successful design by any standards. More than 70 are already racing and around 15 of them are expected to be on the start line of this summerʼs Fastnet Race.
Below: the simple but comfortable and very practical interior layout makes the Sun Fast 3300 a capable and enjoyable cruiser as well as fully optimised offshore racer

This interest is manifested in more than just high-profile one-design class racing, but also racing under IRC or ORC handicaps as well. Last year there were more than 2,000 ORC DH certificates issued in several countries in Europe, Australia and the US, and ORC has structured a new annual double-handed European Championship event: this year’s edition will be in Greece and next year’s will be at the Round Gotland Race in Sweden.

In the IRC world, the UK’s Double- Handed Offshore Series is growing fast, where in this fleet there is some significant UK sailing star talent: Shirley Robertson, Dee Caffari, Stuart Childerley and Henry Bromby are a few. There are also dozens of entries expected in double-handed classes that will be out on the new Fastnet racecourse this year.

In the USA there are both new races – like the Annapolis Double- Handed Race – and established ones held in regions from Florida to Newport, the Great Lakes, Gulf Coast and West Coast where new doublehanded classes have helped boost fleet participation numbers. Even the 2,225-mile biennial Transpac race from LA to Hawaii may once again have enough double-handed entries to form their own class.