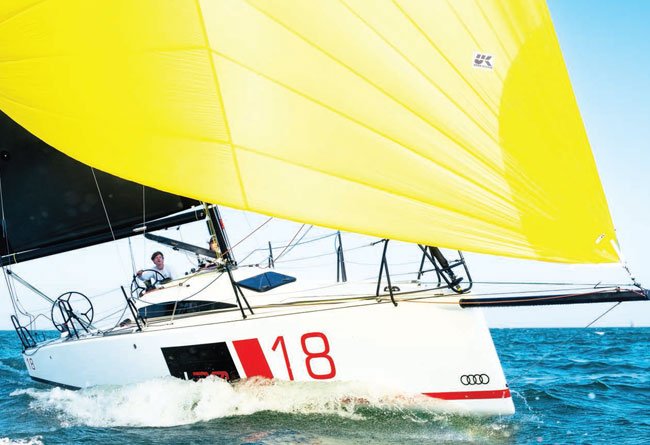 The immense popularity and exploding interest in big boat doublehanded sailing is branching out from its competitive roots in northern Europe and now engulfs nearly every corner of the sailing world. Driven by more than just its recent adoption in the 2024 Olympics, sailing two-up is proving to be a sensible and organic solution for owners who want an alternative to the hassle and expense of full-crew racing. Those who have tried it are often surprised to discover how much fun it is. UK Sailmakers has embraced this trend with gusto, developing a range of not only sail products to support the unique needs of short-handed sailors, but also is in an advisory role, helping their customers to adapt to what for many is a new paradigm in sailing.

Erik van Vuuren, double handed champion in both UK and Netherlands, believes preparation is everything. ‘Prior to every race, have your step-by-step plan ready. The plan must contain at least:

Main picture: An L30 One Design, which is one of the boats being considered for the mixed offshore doublehanded Olympic sailing event in 2024

‘While racing, don’t forget to check the step-by-step plan you prepared. During the UK Double Handed Nationals, adjusting the plan helped us win races, and we were eventually crowned UK National Champions. The simple fact that the races started at different times than initially scheduled and with the new start times, the local circumstances like the tides changed. Many of our competitors did not adjust their plan accordingly,’ he explains.

When first changing sails, get one down and secured before you set the other one. This increases safety on deck while helping to prevent crossing halyards and sheets. More experienced teams use a headsail foil allowing a racing peel: hoist the new sail on the inside of the old jib. After the hoist, tack the boat and drop the old headsail on the windward side. The new sail will help keep the old sail on the deck while it’s being dropped.

Changes you can make
At first, before jumping into doublehanding with both feet, only make those gear purchases you really need. 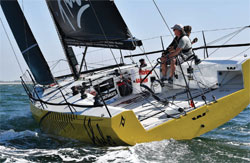 Above: for two-handed racing you want your sails to have a slightly less powerful mould shape. Without the weight of a full crew on the rail, in most boats you’re likely to find the best VMG when pointing a bit higher, sailing a bit slower and feathering more into the gusts

Sail Inventory
The longstanding UK Sailmakers loft in Sweden has been at this game a long time. In fact, most people consider northern Europe the ancestral homeland of doublehanded racing. Sweden's doublehanded races are characterised by often lighter winds. UK Sailmakers Sweden's Mikael Olesen says, ‘when this type of racing started, most of our clients chose to sail with much smaller jibs and smaller gennakers. But the cost to performance in light air is way too big and did not outweigh the gain in rating. Yachts started using full-size sails, everyone ended up following suit.’ In the rest of the world, doublehanded sailors are more apt to simplify their sail inventories.

For shorthanded sailing, UK Sailmakers recommend X-Drive construction, where additional strengthening in key areas can be added, increasing the wind range and life of the sail. X-Drive sails work well for doublehanding because they are more durable than membrane sails. UK Sailmakers’ chief sail designer Pat Considine says, ‘due to the reduced crew weight, we design sails for doublehanders with a slightly less powerful mould shape. Most doublehanded boats are better off sailing slightly higher and slower in order to be flatter. Because doublehanded racing tends to be rougher on sails than racing fullycrewed, we increase the Yarn Density or DPI so that the sail can be used into the J3 range without distorting the shape or damaging the sail.’

Being able to customise X-Drive sails is a big part of why they are recommended for shorthanded sailors. Each sail can be tailored exactly to a customer’s needs and sailing style. Features such as additional patching or taffetas can also be used to extend durability. Taffeta can cover one or both sides of the sail, or just the places of greatest wear like the leech and along the foot where it will hit the lifelines, pulpit and stanchions. 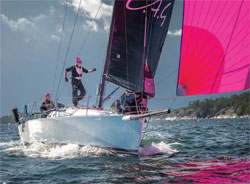 Above: sail handling skills and planning ahead are paramount in short-handed racing. When approaching a leeward mark, it pays to get the kite down earlier than you would with a full crew. Below: the JPK 1080 Frida won its class in the Baltic 500 Challenge 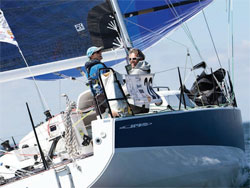 Having fewer headsails to span the expected wind range saves effort, space below and cost. Another way that UK Sailmakers can offer more wind range coverage with less sails is making the jib reefable. Installing a slab reef with a zipper system to contain the reefed section of the sail (see the video in the “how to” section of www.uksailmakers.com). UK Sailmakers Germany’s Dirk Manno says, ‘a reefable jib can be reefed at both clew and tack for heavy air. Reefing is quicker than a sail change, plus one less sail to carry’.

In the summer of 2020, Swedish sailors Bo and Sten Bergqvist sailed their X-332 NN to first place in class and first in fleet in Sweden’s premier doublehanded race, the 2020 Pantaenius Bohsracet. The 170-mile race is limited to 200 boats and is sailed along the western coast of Sweden. After temporarily losing their lead to Dehler 33 Den Röde (another UK customer), when the wind went light early in the race, Bo Bergqvist said, ‘we got moving after raising our new jib top (made out of code zero laminate). We slid past the Dehler again while going barely one knot. An hour after sunset the wind died again, and we changed to the .5 oz spinnaker. Luckily we had just purchased 3mm light air sheets and the sail was able to fill.’ Once again showing the top boats are prepared to the maximum.

Geoff Bishop of UK Sailmakers Fremantle says that in a windy venue, such as Western Australia, headsails with hanks offer safe, reliable handling. Using hanks, the whole sail is attached to the yacht when hoisting and lowering, which is not the case on a headsail with foil tapes.

A whole article can be written on the pros and cons of the different headsail luff attachment methods, but it must be reiterated that the best way to start racing is with the boat and sails you already have. When you’ve learned more about your skills, needs and events you aspire to, then you can work with your sailmaker to make the necessary changes. There’s a whole doublehanded educational page on UK Sailmakers’ website below, where you will find videos, photos and articles to set up and suit-up your boat.