Protecting us from ourselves 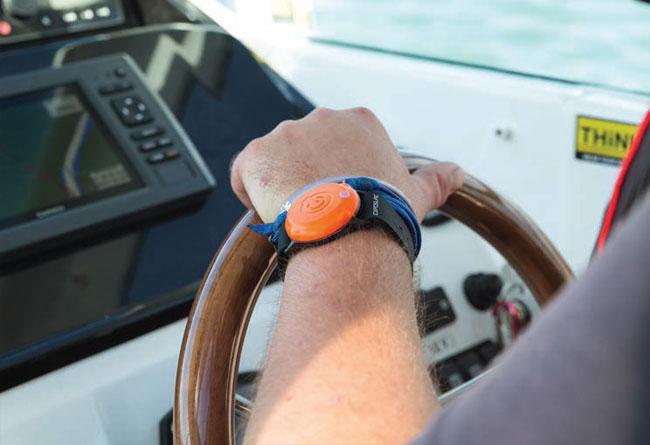 This is surely among the most intelligent marine applications of wireless technology yet seen?

Two overboard location alert systems (OLAS) from Exposure Lights can make the difference between life and death. The first, OLAS Guardian, is a wireless kill switch for RIB drivers. It is designed to protect us from those times when we do the thing that we tell ourselves only “other people” ever do. It’s that moment when you unclip your kill cord to walk to the front or the back of the RIB and then forget to clip back on again.

It consists of a small battery-powered transmitter that the skipper wears round the wrist, a waterproof receiver that is wired into the boat’s kill switch system and a simple panelmounted control switch for the helm itself. It can also be linked to a free OLAS app for added functionality although this is not needed for the core kill cord function.

The system works by sending a regular stream of low-energy Bluetooth transmissions between the personal transmitter and the control box. As soon as this signal is lost, it stops the engine within two seconds.

German professional sailor Marc Pickel, a top Star campaigner and respected coach on the Olympic circuit, witnessed a near-death experience at the 49er World Championships in New Zealand at the end of 2019. ‘I saw Karol Jablonski fall out of his RIB and how hard it was to save and recover him and then try to stop the RIB that was still circling round at high speed,’ he says.

Jablonski, a former America’s Cup helmsman, World Match Racing Champion and 12-time DN Ice Yacht World Champion, is no fool. But the Polish sailor admits he was “that” fool on this occasion.

‘I was sitting in neutral and I was unclipped, turned around so I could do some filming of the start of a 49er race,’ he says. ‘When I finished filming my camera arm dropped down and touched the throttle only lightly. The next moment, the boat accelerates and I am in the water.’

Main picture: OLAS Guardian is a wireless kill switch for RIB drivers. Worn on the wrist, it can stop the engine in two seconds. Unlike a physical kill cord, OLAS Guardian reminds the driver to use it, preserves their freedom of movement and protects everyone on board, not just the driver. 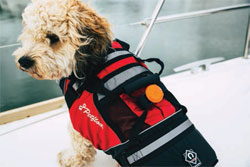 Above: OLAS Core uses the same technology in an automatic MOB alert system for up to 15 crew. It’s activated by separation or immersion.
Below: both systems are configured with an easy-to- use mobile phone app 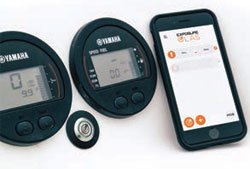 The RIB set off on its own and started to circle in a 40-metre radius. ‘I saw the bow of the boat coming towards me, cutting the waves, and I thought to myself, “this is not a James Bond movie, this is for real. You cannot swim away, you’re going to have to dive.” Which of course is not easy when you are wearing a buoyancy aid that you thought was meant to protect you. As the bow went over my head I pushed with my arms against the bottom of the boat, and tried to get away from the centreline of the boat.’ Jablonski felt the vicious whir of the chopped-up water as the propeller scythed past him; he estimates the blades missed his elbow by no more than 10cm. He was eventually rescued by some other coaches. No harm done. On this occasion, anyway.

‘I think the OLAS Guardian should become the standard for all RIB and powerboat drivers,’ says Pickel. ‘It’s relatively easy to install yourself and it works great. My RIB is close to 7.5m long and I used to operate it with an extended kill cord rope, but then sometimes it would tangle up around my feet and pull out. With OLAS you have a small transmitter around your arm, like a small watch. If you change your wet weather gear for example you are still connected to the wireless kill switch and you are safe.’

Also from Exposure Lights is OLAS Core, a small, portable, wireless man overboard (MOB) alarm system for boats up to 50ft long with up to 15 crew. Within four seconds of an MOB incident it instantly triggers a loud (85 decibel) emergency alert.

Using the latest wireless technology, OLAS Core creates a virtual lifeline by connecting each crew member wearing an OLAS transmitter, such as the OLAS tag wrist band or the small OLAS Float-On personal light, to the boat. In the event of an MOB situation its visual and audible alerts mean the crew can respond instantly.

It’s a small, portable “hub” which can be placed anywhere on the boat and transmits a continuous wireless signal tethering the crew to the boat. It also connects with the OLAS mobile app, which includes easy to use screens to connect, monitor and personally label the connected tags.

As Tom Harrop, product manager at Exposure Lights says, ‘losing a crew member overboard is every sailor’s worst nightmare. The larger the boat, the more difficult it can be to know instantly that an MOB incident has occurred, especially if the crew are working up forward in the dark. OLAS Core gives skippers of larger boats with a large crew, complete confidence that in the event of an MOB incident, the entire crew is alerted immediately and can take immediate recovery actions.’