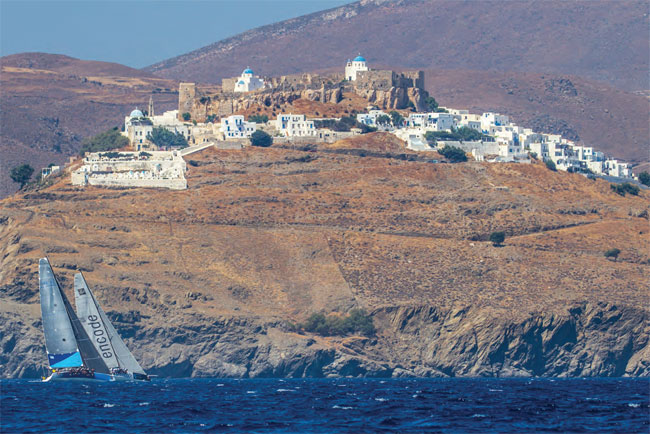 And an almightily pleasant one at that... the latest 600-mile IRC/ORC offshore contest takes full advantage of some of the finest sailing waters on the planet

It’s arguably the best place in the world for sailing. The weather’s nearly always perfect with a reliable strong, warm breeze. The scenery is spectacular and exhilaration is virtually guaranteed. And now there’s a new 600-mile IRC/ORC passage race around the Aegean, designed by local experts to deliver the ideal balance of challenge and fun on a grand tour of the Greek islands. A large and diverse fleet of entrants from 19 countries have already signed up, ranging from Orma and TP52 teams to family crews in midsize cruiser-racers and every sort of boat in between. Race-ready yachts are available for charter and there’s free berthing in a dedicated race village before and after the event. The Aegean 600 looks set to be a major highlight of next year’s Mediterranean sailing calendar. If you like the sound of it, here’s what you need to know.

The race kicks off on 4 July, when the famous meltemi trade winds are almost as regular as clockwork in the Aegean. An experienced team of race officers from the Hellenic Offshore Racing Club (HORC) have put a lot of thought into planning the route, which aims to deliver equal amounts of downwind sailing, tacking upwind and fast reaching. It includes a spectacular transit of the Santorini Caldera and tough tactical passages through the Kos and Mykonos-Delos Straits. It crosses rough patches of sea at favourable angles; keeps the fleet away from shipping traffic; avoids potential hazards such as rocky capes, shallows and lee shores; and gives a zigzag route for the upwind leg.

‘We designed the course to keep the fleet in the south Aegean Sea where there is definitely more wind than the northern Aegean,’ says HORC’s Konstantinos Tsigkaras. ‘Then we selected landmarks like the Poseidon Temple on Cape Sounio for the start and finish, and used the islands of Milos, Santorini, Rhodes, Kos, Patmos, Mykonos and Delos to create a challenging counterclockwise course that most likely will offer all points sail. You can expect to sail under spinnaker and surf all the way to Kasos and Karpathos. There’s a broad reach to Rhodes, a navigationally interesting upwind leg all the way north to Patmos, and then all kinds of reaching to the finish.’

The Aegean’s prevailing weather is driven by high pressure over the central Balkans and low pressure over the eastern Mediterranean with the difference in pressure between the two systems dictating the wind strength. ‘It can be force 6-7 but force 3-5 is normal, getting down to force 3 at night,’says Pericles Livas, co-leader of the locally based Optimum racing team. The wind is typically NNE in the Cyclades and NW in the lower part of the Aegean. On the east side, in the Dodecanese, it’s usually NNE in the morning but shifts to NNW in the afternoon.

Main picture: the Aegean Sea is one of the world’s best sailing areas with reliable fresh breezes, warm sunny weather, spectacular scenery, tactical pilotage and more. The new Aegean 600 Race offers an exhilarating non-stop grand tour of the Aegean’s uniquely beautiful islands at the very best time of the year. Pictured above is Astypalaia in the Dodecanese with its castle placed royally on a hilltop

‘The wind cycle for the meltemi is that it rises with the sun, peaks in mid-afternoon and eases off by at least 10-15 knots as the sun sets.

‘Also, when the meltemi is strong enough in the day (around force 6), it picks up again after midnight and gets to maximum speed as the sun rises. So the lightest winds are between sunset and midnight. But then you get these funny nights when it blows 25 knots all night and the position of the sun makes no difference.’

It’s also worth knowing that the meltemi tends to come in roughly three-day cycles, alternating between medium and strong. ‘A windless day at this time of the year is rare but it could happen,’ says Michalis Aftias, a member of the race organising committee. ‘I would prepare the boat and crew for light, medium and heavy weather conditions but remember we are always talking about t-shirt sailing conditions, air temperature of 30°C+ and water temperature over 25°C, no boots, no socks, just light waterproofs to wear mainly at night. If you are from the UK, just shorts and t-shirt and you will be fine!’

‘The forecasts are good at predicting where the most pressure is and the general pattern of the meltemi as you sail east towards Rhodes and then west on the return to Cape Sounio,’ explains Nikos Lazos the other co-leader of Team Optimum. ‘They tend to be accurate when the meltemi is strong but less so when it goes light or transitional. We usually look at two or three forecasts and study the variations. Then when we race we decide which prediction was closer to reality and on that for the rest of the day.’

The start of the race should be a straightforward, breezy downwind leg to Milos. After that things get tactical with teams needing to study the geography of the island groups to pick the fastest route – which is rarely the rhumb line because the wind bends significantly around many of the islands and you can easily end up closehauled while others are reaching. ‘You have to look on how every island is positioned,’ Livas says. ‘Consider how wide it is relative to the wind direction, study the height of its mountains and decide how far from the windward and leeward side is safe passage – it can be up to six times the height of the mountains. This allows you to avoid serious katabatic gusts on the lee side or being left with no wind and confused seas on the windward side. In daylight you can cut corners by reading the wind on the water ahead, but at night that is risky unless the moon is very bright.’

The strongest winds are likely to be encountered towards the end of the second leg, in the Karpathian Sea, but there are wind acceleration zones with a strong Bernoulli effect between some of the islands, too. Teams should expect gusts when approaching Kasos, Karpathos and Rhodes; in the Kos Strait; after passing Patmos; in the straits between Ikaria and Mykonos; in the strait between Mykonos and Delos; in the Makronissos strait; and also until clear of Tinos. A top tip from a highly regarded local racing skipper is to give the southern shores of both Ikaria and Tinos a very wide berth. 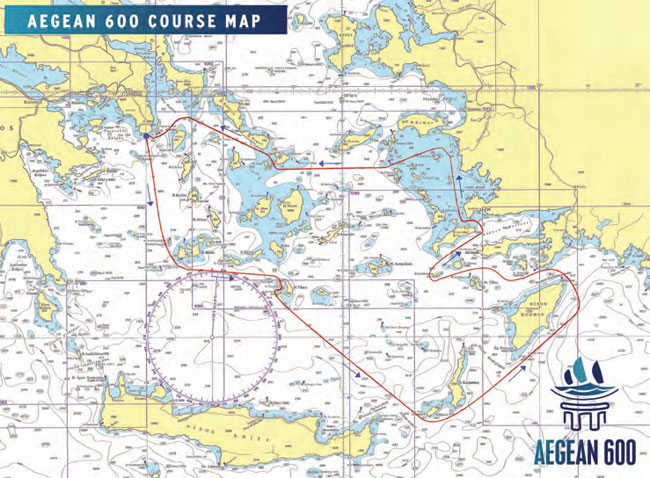 Above: the Aegean 600 racecourse has been planned by a team of local experts to deliver equal amounts of surfing downwind, beating upwind and fast reaching, with the most spectacular scenery that the Aegean Sea has to offer. It’s likely to take most competitors three to five days and as it’s the first edition the course records are definitely up for grabs!
Below: Klima, one of the most colourful fishing villages in Greece, is on the island of Milos in the Cyclades – the first turning point on the course 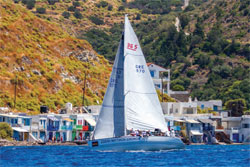 Katabatic winds are most likely on the lee sides of Ikaria, Mykonos, Tinos, and Gyaros. The places where unwary racers are most likely to end up becalmed in a wind shadow are the east/north-east side of Rhodes and – once again – Ikaria. Reflected swell can also make things interesting off the north shores of islands such as Syros and Kea.

‘Ikaria is like a long wall to the north winds,’ he says. ‘Stay well below the rhumb line to be safe and to stay in the fresh, clear wind that funnels between Ikaria and Mykonos. Then again, when the north wind is light it can pay to go very close to the rocks on the lee side of Ikaria for the fastest route to Mykonos. Also, avoid going close to the north shore of Syros to cut the corner as the wind tends to lift more than you think.’

As this is a brand new event, the course records for both multihulls and monohulls are definitely up for grabs. ‘Around 48 hours is possible for a racing maxi,’ Tsigkaras says. ‘We would love to attract entries with the goal to set the race record for the years to come.’ For most of the boats in the fleet, he reckons it should take three to five days to sail the course.

So which are the local boats to beat? Team Optimum led by Pericles Livas and Nikos Lazos are among the leading contenders, having won the Middle Sea Race once and raced seven times while counting 31 participations in the Aegean Rally, out of which 10 were victorious. They’ll be sailing their updated Farr 52 OD (ex-Chessie Racing) with a battle-hardened crew on board, but are likely to face stiff competition for line honours from rivals including the TP52 Bullet led by Olympian Dimitris Deligiannis, GP42 Black Jack and many others who are energised by the prospect of the first ever international 600-mile offshore race in their own home waters.

But while local knowledge is undoubtedly useful, Tsigkaras says there is every chance that a skilled international team could beat the fastest Greek competitors and win the Aegean 600. ‘This is the first edition and unlike the Middle Sea Race, there is no local team that has a serious grasp of the whole course,’ Livas says. ‘So if you like t-shirt sailing conditions and nice long surfs without fear of extreme conditions, join in and enjoy the ride.’

‘The Aegean Sea is one of the most interesting sailing areas in the world,’ says Ioannis Maragkoudakis, commodore of the HORC. ‘The Aegean 600 offers non-stop sailing around islands of unparalleled beauty, in a sea that is the cradle of Western civilization. HORC with more than 40 years of experience in world championships and international offshore competitions will ensure its excellence and safety.’