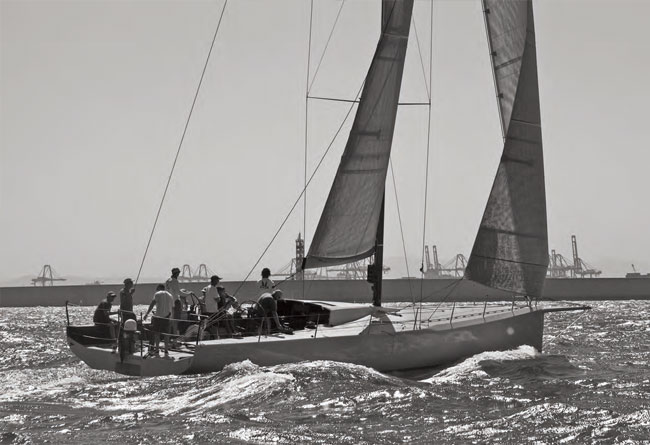 In ocean racing the name Black Pearl is synonymous with excellence. This is a mature team led by owner Stefan Jentzsch whose racing interest is almost exclusively offshore. He and team manager, Marc Lagesse, bring together an impressive veteran crew whose CVs are littered with multiple Volvo Ocean races, even Whitbreads, not to mention dozens of Fastnets, Transatlantics even a few America’s Cups. It's a small and tight group who enjoy their racing at a high level. It’s therefore unsurprising the team’s choice of boatbuilder for the latest Black Pearl was going to be a builder who shares the same dedication, passion and fastidious attention to detail that this team has while on the water. For Black Pearl the obvious choice was King Marine.

Over the last few years the team has ticked off class and overall wins in numerous classic races, including last year’s difficult Middle Sea Race and in 2017 the Cape to Rio Race. The latter is an impressive feat for this triennial 3600-mile race across the South Atlantic considering they raced a Carkeek 47, not a Maxi. This team prefers racing offshore with a group that’s small but versatile, trading some creature comforts to maintain this tight footprint. And in no way does small size correlate to diminished interest in their results: this is one of the best-prepared teams racing offshore today.

‘We certainly had a lot of fun and success in the five years we sailed the 47,’ Lagesse explains. ‘At the time this boat was available for us it worked into our schedule on a short timeline. However, our interests have evolved into wanting a boat just a little larger that could have just a little more comfort while racing offshore. Our brief to our candidate designers was for a fast offshore boat between 53ft up to Open 60 sizing and it had to be sailable by a crew of less than 10.”

Among several credible options, the team chose Botín Partners, in part because of their success in TP52 designs, but also their more recent successful offshore designs and fertile ideas on matching design concepts with functional realities. The decision to have a design drawn at 56ft represented their ideal optimum size and rating for their intended programme of racing: the classic 600- milers such as the Caribbean 600 along with the occasional ocean race like the Transpac.

Main picture: the next-generation Black Pearl is a 56-footer designed by Botín and built to a very high spec by King Marine. Despite a few obvious parallels with the highly successful Botín/King TP52s, this boat is comprehensively optimised for offshore racing, based on five years of compiled performance data. Key features include a fixed keel and cleverly designed water ballast system

‘This team know exactly what they wanted,’ said Adolfo Carrau of Botín. ‘They had five years of collected performance data so they knew the average range of conditions to target in the design. They knew that TP52s rate well but they wanted a boat a little larger, yet not so large that a canting keel was going to be costeffective for rating. So we opted for a fixed keel design with water ballast used to compensate for the smaller hiked crew.

‘And unlike the TPs, their offshore programme meant the boat had to be completely waterproof yet also lightweight and strong. There are many details needed to keep a highspeed boat like this waterproof, so deck design is really important. Many builders underestimate the effort needed to achieve this, but with Marc working with King Marine build manager Tony Evans and Black Pearl technical consultant Micky Costa, they have been able to achieve success.’

Lagesse agrees it’s this attention to detail where King Marine really excels. He says the atmosphere at King Marine is one of collaboration and not simply taking what’s proposed from the builder then fighting through detailed redesigns.

‘Micky and I could sit alongside the technical team and co-design the details in real time rather than endless iterations of shared drafts passed among all parties. And when what was approved deviated from the original build proposal, they were great on knowing exactly what the difference would be in cost because their tracking of time and materials is so organised.’

Lagesse says he found this transparency unusual and refreshing compared with most other builders where cost controls and pricing are not so well-organised. An example he cites is the modification of the foredeck toerails from what was described as “inshore” on the original bid contract to a design more suitable for this boat’s offshore use.

‘We looked at the original design, made modifications to our specs and right away I had a report on how much this change cost in time and materials. The whole experience was honest, open and had everyone on the same page. This is a testament to how organised operations manager Pablo Santarsiero is with his process and his team.’

This was important for the assembly process, where systems in the interior get put in place before the deck is bonded to make the installation process easier, more efficient and cleaner. In fact, keeping a clean shop is a signature feature of King Marine. Lagesse says, ‘their operation is remarkable, it is cleaner than any other boatbuilder I know. It's a testament to their attention to detail in all their operations.’

There are many other details specific to Black Pearl that make her unique compared with other similarsized raceboats, and where the collaborative environment at King Marine allowed for clever design and build execution at known cost.

‘When this idea was proposed for the mock-up, the build team was very cooperative. Taking this approach made the final fabrication in carbon more exact and acceptable for everyone,’ says Lagesse. This is a prime example of the importance King places on full cooperation with the customer. And despite very difficult times with Covid 19, Lagesse says they delivered a boat that was both a work of art and built to perfection.

Above: Black Pearl was one of the first yachts built at King Marineʼs new hi-tech shipyard in the Americaʼs Cup harbour in Valencia, which offers comprehensive facilities for yacht owners and their teams.
Below: unlike most comparable boats Black Pearl has a deckstepped mast which keeps the interior watertight but requires extra reinforcing structures down below.
Bottom: another unusual feature is the dual companionway and ʻcentreline peninsulaʼ equipped with a hydraulic winch, rope clutches and associated controls 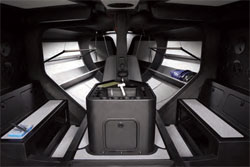 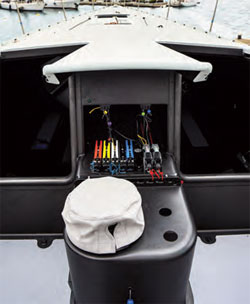 ‘We take this seriously: we cannot accept disappointing those who have rewarded us with their trust,’ said King Marine’s Gabriel Mariani. ‘We also do not negotiate speeding up procedures to lower costs. We know that composites are a science and an art, that it must be respected and that is why we have spent a lot of energy in the last 10 years in order to have all the procedures written in such a way as to transmit this to our team. We have really detailed the steps to follow for us to have traceability of the processes and materials, so we may see how something successful was done and be able to repeat this in the future. We believe that it is the only way to guarantee quality and is our commitment number one.’

The Black Pearl team was also one of the first to take full advantage of King Marine’s new facilities at the old Team New Zealand base in the America’s Cup harbour in Valencia, where the facilities were not only efficient for the build team, but attractive and efficient for the visiting owner and sailing team during the commissioning process.

‘It was impressive that when at this facility we had our own office, storage areas for rigging and sails, canteen, locker rooms, a lounge area and Stefan even had his own office if he needed to attend to business matters. This made the time spent there very efficient and much easier than trying to operate out of a normal marina or yacht club. It was perfect.’

After only two days of sea trials the boat was ready to race and after just four days they embarked on a 150-mile shakedown sail before returning to her new home at the King Marine waterfront facility. Both the owner and crew have only very positive things to say about the boat and look forward to doing many fast and fun miles on her.

‘It is a pleasure for us to have satisfied clients like the Black Pearl team, which only reinforces the good decision we made when opening this second King Marine headquarters,’ says Mariani. ‘We invite all those teams that want to come to test the base to contact us so that they too can have this complete experience. For now, we continue to invest to always provide and guarantee the very best.’

As for overall impressions, Lagesse puts it simply: “’this may have been the first Black Pearl we built at King Marine, but I hope it will not be the last.’