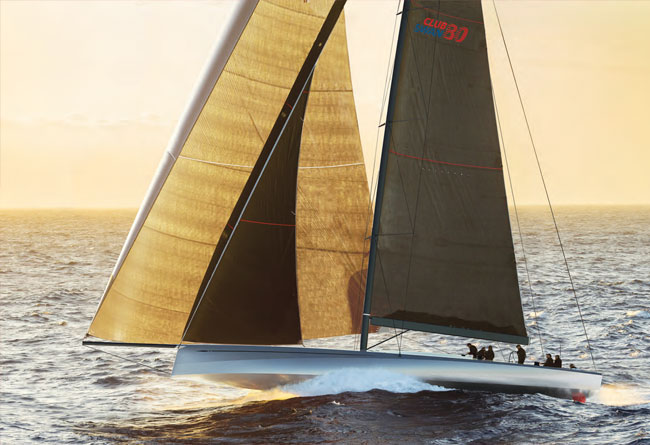 Conventional wisdom suggests that promoting a maxi-sized one design will always be a challenge. But then who cares about convention when a boat like this pops up on your radar?

Despite the continued growth and success of one-design classes around the world, there’s a reason why there has not been an 80ft onedesign since the Grand Mistral Maxi class of 1999. For many owners, winning at this size has frequently been as much about smart thinking and engineering their own private advantage, as it has been about success on the racecourse. Onedesign takes all that away. The big guns at Nautor’s Swan know this, some of them have been a part of those very circuits, but they also believe that the landscape is different today and that their recently announced ClubSwan 80 one-design will succeed.

The announcement of this striking, all-out 80ft racer marks another bold step forward for a builder that has reinvented itself once again by managing to shake off the popular image of a range of elegant but sedate racer/cruisers in favour of two fresh and distinct new lines – racing, with ClubSwan Yachts, and performance cruising, with the Swan and Maxi Swan lines.

But this has been just the start of a long-term campaign for the company. The launch of the radically styled ClubSwan 36 took many by surprise with a design that appeared so far out at the extreme that it was difficult to imagine it had come from one of the world’s oldest and most famous yachting marques. And for those who took a closer look there were more surprises in store. Despite her looks and technical specification, this was a boat aimed squarely at owner/drivers.

Due to COVID19, and the cancellation of many of the season’s regattas, the impact that the CS36 was certain to have, has been put on hold, at least for now. But when racing resumes, the indications are that the class will be making the headlines once again, which is good news for her 80ft sistership.

Based around a similar concept, both in appearance and in operation, by the time the ClubSwan 80 hits the water in spring 2022, the ClubSwan 36 will have done much of the ground work when it comes to putting theory into practice.

‘The ClubSwan 80 is a challenging project,’ admits Nautor Group ’s vice president Enrico Chieffi. ‘The Maxi scene is in a deep crisis. Historically this class has been very successful but this success has decayed over time with far fewer boats being built. We believe there are two reasons for this. The first is owners asking themselves why they need to go racing with a Maxi when they could have a lot of fun on a much smaller boat. We are seeing this already within the ClubSwan 36 and ClubSwan 50 fleet.

‘The second is that owners are becoming increasingly frustrated by the different rating rules and the ways that different boats are compared. This has led to a large number of classes but with few boats in each, which in turn has diluted the competition for all. So we said, why don’t we try to develop a one-design class along the same lines as the boats that we know have been successful, our own ClubSwan 36, ClubSwan 42, Swan 45 and ClubSwan 50s.’

With a typical combined fleet of 45 boats across the classes competing at each of the various ClubSwan events, a key part of the evidence to support their idea has been staring them in the face. But would the concept really scale up to a Maxi?

‘Aside from creating a boat that is clearly going to be an exciting, high- performance machine, we have looked carefully at other factors that we think will make this boat even more appealing. Among them, the total number of crew will be 14-16 compared with 24-28 for a Maxi. We have strict limitations on the sail wardrobe where the sail button system will be used to limit the number of sails that can be built in a season. Because it is a strict onedesign there is no option to change masts or keels which are frequently areas of high cost in the Maxi world. Areas like these have helped to fuel the arms race in the Maxi fleet which is now one of the central problems for the class.

‘The number of events is important too and keeping this to a manageable level is another key to success. We will be looking to run four regattas a season plus a championships.

‘In addition, we’re not allowing outside assistance from coach boats or weather services, these will be supplied centrally to the class and available to all.’

And then there’s the owner driver rule
‘While we believe we are leading the charge in this area of racing development we are not aiming to be the America’s Cup, nor are we trying to create a large TP52, our target is to be one level below these professional extremes and appeal to amateur owners who are deeply passionate about high-performance racing.’

Yet at this size, the owner/driver aspect could potentially be the hardest sell. Eighty-footers have never been easy to sail and when they look as sporty as this there is a risk that potential owners will jump to conclusions about how tricky they may be to handle and take even more persuading. But Chieffi is confident there are several important reasons why the ClubSwan 80 will buck the trend. One lies with the design of the boat itself.

Main picture and above: in many ways the new ClubSwan 80 follows the template set by the radical ClubSwan 36, albeit on a much larger scale...
Below: the rig is expected to be highly adjustable with a heavily aft-raked mast 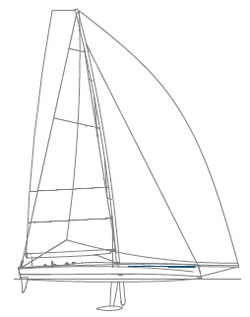 ‘The fact that the ClubSwan 80 looks similar to the 36 is no coincidence. As anyone who has sailed the 36 will know, the real key to this boat is that while it is a high-performance boat it is very easy to handle thanks to the advanced hull form and sailplan along the innovative underwater appendages.

‘The ClubSwan 80 will be the same. For example, full bow sections provide a full rocker when the boat is heeled and sailing upwind. This even distribution of buoyancy makes for a very balanced boat and a responsive, well mannered feel. Downwind the flat sections aft and twin rudders make for a stable and sure-footed feel that is again very easy to manage on the helm.

‘Where the 80 differs significantly from the 36 is that she will have a canting keel where the 36’s is fixed. It is this canting keel, along with the innovative sailplan, that is behind the reduction in crew numbers. The interiors as well are conceived to give a spartan, yet stylish possibility to have some weekend cruising. The base yacht will be the simplest, lightest and fastest you can get. We will permit options to allow for comfort, but no-one will be allowed to buy extra performance.’

But while the 80 has much in common with the 36, it was the ClubSwan 50 that gave the company further confidence that a radical and innovative boat concept would work and still be recognised as a Swan.

‘At the time of the 50’s launch there was no question that people were surprised, this was a big step forward for the company,’ continued Chieffi. ‘We have built 28 boats so far and regularly get around fifteen on the start line at events. It’s a class that has been competitive from the start and looks set to continue.’

When it comes to construction the ClubSwan 80 remains the full grand prix package with a hull and deck that will be a carbon pre-preg sandwich layup. For the construction of the ClubSwan 80, a partnership with Persico Marine has been created. Specific details around the rig design are still being refined but the final design is expected to follow similar lines to that of the 36 in that it will be highly adjustable.

‘We think the cost of running this boat will be around a third of that for current Maxis,’ said Chieffi. ‘That will clearly represent a huge saving.’

So when will we see the first boat?
‘The yacht is being constructed with our strategic partner Persico Marine and the launch is set for the spring of 2022. We are planning to have three boats on the start line in the Maxi Yacht Rolex Cup event in Sardinia in the same year. We are still in the process of refining some aspects of the design but our intention is to start building by the end of this year.’

Even simply from the renderings and the early details of this bold new design it is clear that Nautor’s Swan are aiming high once again with an overall style that does most of the talking. But just in case you remain in any doubt as to the scale of ambition around this project, Chieffi sums it up.

‘While she will be an easy boat manage, this will be the fastest 80 foot monohull out there. Our target is to have 10 on the start line and should we achieve this we will be writing a new page in sailing history.’

Bold talk and an ambitious goal, but from a company that is starting to make a habit of bucking the trend.