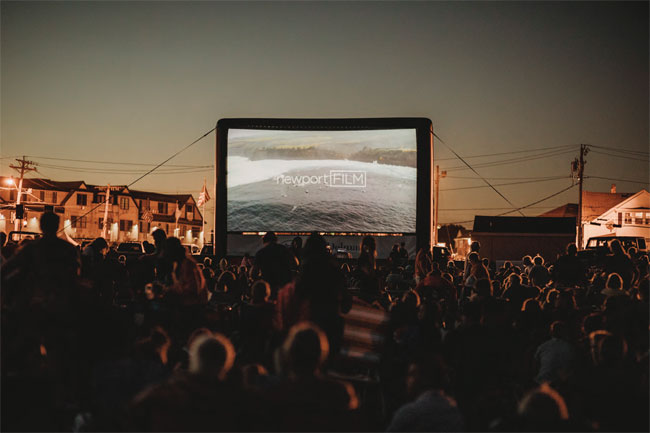 By focussing on a single region that has existing strong awareness of ocean health, groups in Newport RI are working towards a scaleable solution-oriented model with potential to be exported worldwide

We all know that the health of our oceans is deteriorating and most of us want to do something about it before it’s too late. But where to start? The scale and complexity of the problem are daunting. Rising sea levels, soaring sea temperatures, acidifying seas, toxic runoff, and plastic pollution are just a few of the symptoms – and that’s before you begin to consider the fundamentally interconnected nature of land and water, soil and sea. But there’s hope. In the coastal city of Newport, Rhode Island, where 11th Hour Racing has fostered a coordinated shift towards a sustainable future in partnership with a wide-ranging, forward-thinking group of local organisations, an answer is starting to emerge.

This solution-oriented approach to building a community that cares about the ocean needs to be socially and economically sustainable, while also robustly scalable. From local grassroots initiatives to the regional, national, and global levels, we need a paradigm shift from an extractive economy to a sustainable model that uses resources wisely and enables communities to flourish and allows lands, coasts and oceans to thrive.

Why Newport, Rhode Island? ‘We strongly believe in taking care of our own backyard,’ says Rob MacMillan, president and co-founder of Newportbased 11th Hour Racing. ‘We know the community well, sailing is part of the culture and we can use that to talk about ocean health. We have some great partners here who are easy to work with and have the vision to look beyond the short-term grant cycle.’

Main picture: up to 3,000 people attend the free public outdoor screenings of environmentally focused documentary films on Thursday evenings in Newport, Rhode Island, organised by NewportFILM and funded by 11th Hour Racing. The film makers often attend and lead Q&A sessions after the screenings to encourage the audience to take personal action on environmental issues

The city of Newport hosts a passionate, ocean-loving community with an economy focused on boating, tourism, and nature, and residents have become awakened to the seemingly endless human-made issues affecting the ocean. But there’s a lot more to Newport than sailing. ‘It’s not the community that people think it is,’ MacMillan says. Beyond the mansions, yacht clubs and marinas it actually has the demographics of a working-class town and is home to many lowincome families. With its diverse community, limited size and strong ocean connections, Newport is an ideal venue to trial sustainability schemes that can then be scaled up and deployed elsewhere.

One of 11th Hour Racing’s longstanding grantees, Sail Newport, is addressing the social aspects of sustainability through sport. New England’s largest public sailing centre, it is best known in the sailing world for hosting large-scale regattas and grand prix events. However, its main purpose is to offer affordable public sailing instruction, attract new sailors to the sport, and foster personal connections with the ocean.

One of its great successes is the 4th Grade Sailing Programme which provides sailing and STEM education to every 4th grade student in Newport public schools as part of their curriculum. Summer sailing courses for grades 1-5 are also offered and both programmes encourage all students to become ocean stewards. By enabling the younger generation of Newport residents across the socio-economic spectrum to grow up enjoying a positive, personal experience of their local marine environment, they too will be inspired to protect it.

Inspiring, educating and entertaining to build community and propel change is also the mission of another 11th Hour Racing grantee, newportFILM. Its public outdoor screenings of environmentally focused documentaries are popular with Newport residents and visitors alike. Screenings are usually followed by curated Q&A sessions with the film’s directors or producers, creating a relaxed space to delve into topics that can be controversial. Up to 3,000 people of all ages gather on Thursday evenings (socially distanced these days) to engage in powerful storytelling that opens their eyes to the threats of climate change and the impact humans are having on ocean health.

Fostering ocean literacy and stewardship is a major component of 11th Hour Racing’s grant-making strategy that goes beyond sailing centres and community events. Projects like Healthy Soils, Healthy Seas Rhode Island (HSHSRI) have entered households, backyards, restaurants, and local events to collect food waste and stop it from entering landfill. Learning about food waste and its connection to climate change and ocean health has become top of mind in Newport. While HSHSRI is firmly rooted on dry land, the methane produced by food waste that gets buried in landfill is arguably the most serious threat to marine ecosystems, as it is a far more powerful greenhouse gas than carbon dioxide (CO2). When food waste is composted rather than sent to landfill, oxygen is able to circulate as it degrades, and no methane is produced. Composting sequesters CO2 out of the air and puts it back into the soil. The result of replacing chemical fertilisers with compost is healthy soil that absorbs more water and reduces the runoff from land that contributes to toxic algal blooms and water quality issues in rivers, lakes and coastal waters.

Diverting all the food scraps – currently, 35 per cent of total landfill waste – from homes, schools, restaurants and other businesses that have signed on to the programme is a complex undertaking, and a consortium of grassroots organisations have joined forces to tackle it around Newport and surrounding communities. Clean Ocean Access, an ocean-focused non-profit and a grantee of 11th Hour Racing, is spearheading the initiative.

‘Ocean health starts on land,’ says programme manager Eva Touhey. ‘The most effective and accessible behaviour change is composting, but it has taken a lot of legwork to get people interested.’ Businesses are offered subsidies and marketing resources to help get them involved. In its first year HSHSRI composted 465 tons of waste from households, restaurants and other businesses, establishing proof of concept. This year’s goals are to scale up rapidly, and work with farms to establish local composting facilities, reducing a haulage trip of 30 miles each way to five miles or less, which will make composting more economically viable as well as reducing fuel usage and carbon emissions.

11th Hour Racing is also funding Clean Ocean Access’ Marina Trash Skimmer Project. Trash skimmers are essentially giant versions of swimming pool filters, and the first ones on the East Coast of the US were installed in Newport Harbour. Most harbours and marinas have a corner where flotsam and jetsam tends to collect and that’s where trash skimmers are installed. Others are strategically located near outflow pipes and in places where trash accumulates naturally due to wind, waves and currents. The skimmers pull in marine debris, 33,325 pounds of it since 2016 to be exact, and also filter water through an aerator to help oxygenate the surrounding areas.

Eight skimmers are already operating in Rhode Island; three more are planned. They run 24/7, costing about one dollar per day for electricity, and only require 15-30 minutes of daily labour to empty and maintain.

‘They have three purposes,’ says project coordinator Max Kraimer. ‘They remove trash, help us to understand where it comes from and they’re a tool to educate the community.’ Clean Ocean Access hosts public skimmer tours to showcase how they work. Marine biologists use them to study the movements and sources of pollution, and in some places they will deliver a return on investment by reducing the need for dredging. 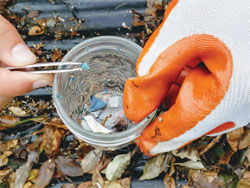 11th Hour Racing is also supporting two pioneer programmes spearheaded by Newport based charity Clean Ocean Access.
Above: the Marina Trash Skimmer project puts filtration devices in Rhode Island harbours and marinas to remove pollution, teach people about it and support researchers with their studies.
Below: Healthy Soils, Healthy Seas Rhode Island diverts many hundreds of tons of food waste from landfill and prevents emissions of methane, one of the worst greenhouse gases 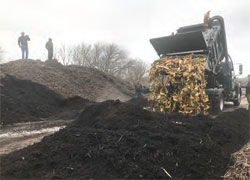 Most of the waste is seaweed commingled with microplastics. Of the rest, around 75 per cent is single-use food wrappers, containers and straws, and 20 per cent is cigarette butts of a type sold from the 1960s to the 1980s. ‘The more we look into it, the more light is shed on how serious an issue marine pollution really is,’ Kraimer says.

Partner organisations ranging from nonprofits to businesses empty and maintain the skimmers, and Kraimer is hoping to scale up through sponsorship. ‘Most cities have trash cans on every corner,’ he says, ‘so why not skimmers in every harbour?’

About 19 nautical miles north of Newport, another 11th Hour Racing grantee is developing coastal resilience with the help of nature. A pioneering project to combat severe coastal erosion is trialling a natural method of shoreline protection that may soon become a vital tool to combat the catastrophic effects of rising sea levels and storm surges on coastal communities. The traditional approach of building seawalls and dikes can actually exacerbate erosion, whereas restoring natural features such as sand dunes, salt marshes, and oyster reefs can be a better and more cost-effective solution. The Nature Conservancy in Rhode Island is building two “living shorelines”, with native dune grass and salt marsh habitats, to test their effectiveness in protecting the shores of Rose Larisa Park in East Providence. Suitable sites for oyster reef restoration are also being identified. With sea level rise a growing and increasingly urgent concern, people responsible for local flood defences throughout the New England region are watching this pilot project with great interest, as it has the potential to be replicated in other areas that may be at risk.

All of these organisations have a unique approach to protecting and preserving the health of our ocean and local waterways, but the complexity of these environmental threats requires a multi-disciplinary approach. There is no single solution, which is why the Newport community has banded together to face these challenges from every angle. It has shown us that whether or not we live by the water, our behaviours on land do impact ocean health, and we all have an important role to play at a local level. Driven by the vision of a future with cleaner and healthier waterways, 11th Hour Racing supports a community of strong environmental stewards that are leading by example for other communities to take similar action for the ocean.