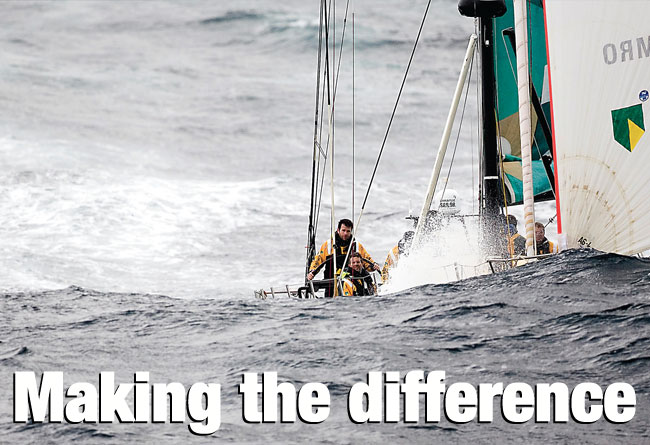 Ed Gorman talks to Mike Sanderson, Jules Salter and Ian Walker as he attempts to identify what it will take to win the first ever one-design grand prix race around the world

A new edition of the Volvo Ocean Race is always a mouthwatering prospect and this year’s race is no exception, not least because the strict one-design boat and sail rule – brought in largely to reduce costs in time of recession – levels the playing field.

Although pro sailors and designers love to express themselves in a development class – which was always the stock in trade of the Volvo Ocean Race and the Whitbread before it – the one-design rule has one hugely attractive element: there should be no place to hide for the sailors, skippers and navigators. If the boats are as equal as both Volvo and builders Green Marine say they are – and they are very confident about this – then we are in for an exciting show.

In Formula One it has long been the dream of paddock watchers to put the superstars and also-rans of world motor racing in identical machinery and see who really is the fastest. Many believe it possible that some of the quickest racing drivers spent their best years in the middle or the back of the grid for want of the right break or sufficient financial backing.

So in the Volvo Ocean Race context what is going to make the difference in identical machinery, assuming none of the crews resort to dirty tricks? What will be the key parameters governing performance and who comes out on top? You can tick off most of the key categories quickly enough.

Getting the balance right between pushing hard and not breaking the boat; understanding what makes the boat tick and where the sweet spots are; making the right tactical calls; helming and trimming and selecting the right sail combinations; gear changing in evolving sea and wind conditions; consistency, stamina and fitness; leadership and crew deployment.

Mike Sanderson, who won the 2005-06 Volvo Ocean Race as skipper of ABN AMRO ONE and who has almost unrivalled experience in the race going back to the Whitbread of 1993-94, has no doubt that the simple business of driving fast will be a critical factor. He says that the difference between a merely excellent helm and a world-class one can be enormous over hours on the water. In the last race he noticed that every boat was running out of helmsmen by the end – by which he means fewer and fewer guys were doing more and more of the driving because skippers could not afford to use second-raters even for short periods.

The advent of tight-luffed sails puts even more emphasis on super-accurate driving, something already evident in the last race. ‘It will be even more pronounced this time,’ says Sanderson. ‘Some guys who you would class as world-class helms could still get out of whack on a boat like this, and if they do then you are talking about really big drop-offs in performance.’ Sanderson has been thinking too about the eight-man crew conundrum. While the women on Team SCA have 11 sailors to work with, the men have only eight, which begs the question: do you put the navigator and skipper on opposite watches or can you afford to have either of them float, as in the past when crew numbers were bigger?

Sanderson argues that these are almost the wrong questions. He fervently believes that the right mindset or philosophy for crewing the new 65 is to think Open 60 and solo or double-handed sailing ramped up, not Whitbread 60 or Volvo 70 scaled down. So formal watch structures are not as important as being able to deploy all your talent as and when you need it.

‘In the old Whitbread days you went to work and finished work,’ says Sanderson, also a veteran of a solo Transat on Pindar Alphagraphics. ‘We managed to change that mindset. We brought in a more shorthanded approach and that’s going to have to be brought to another level again in this race, now that they have fewer people. It has to be all hands to the pump. On ABN for every sail change, every gybe and every tack we’d all get up whether we were on or off watch. You are not on watch or off watch – you are trying to win at all costs.’

Jules Salter, one of the most experienced Volvo Ocean Race navigators, agrees. He views a flexible approach as critical to getting the best out of limited resources. Looking at overall performance, Salter goes back to the old principle of time on the water, something that should benefit the SCA team who have a six-month leap on the field (although they will have subjected their back-up sails to far more mileage than their rivals).

‘It will still come down to the same things,’ says Salter who, like Sanderson, is currently uninvolved in this edition. ‘You’ve got to sail your boat fast for a high percentage of the time. You can’t afford to be slow and that comes from having the right people on the helm and being confident with the performance numbers you have. Generally this comes from good training, good feel and good preparation. Time on the water is critical to achieving those skills.’

Salter has no doubt that, as in any onedesign fleet, right up from Lasers at the Olympics, the fastest sailors will get the boats moving more quickly. ‘Even though the sails will be one-design and there will be a lot of reaching, there will still be some big differences in trim and set-up. So finding out what’s fastest for a sea state or a particular wind strength will be important, because you will see big differences in speed through differing driving techniques and trimming techniques.’

Ian Walker, skipper of Abu Dhabi Ocean Racing and many people’s current favourite for overall honours, has been thinking about this, and particularly the relative importance of performance in strong winds and light conditions. ‘Historically the race has been won by the boat that reaches fastest. But that’s because there have been quite big design discrepancies which have produced big speed differences,’ says the two-time Volvo skipper. ‘You’d imagine that on a reach – crossing the trade winds, for example – the new boats will all go along at similar speeds. But when it gets light and fiddly, crew performance could become more critical.’

Walker believes this race is going to be the complete challenge where even the smallest mistakes could be critical: ‘It’s going to be attention to detail that will make the difference – half an inch here and there, stacking a bit harder than everybody else, steering more accurately. It’s never one thing; it’s always 50 small things that add up to one big thing,’ he said.

He too has been thinking hard about the role of navigator and skipper and believes that, in Simon Fisher, he has the right man for a job that will involve multitasking within a small team. ‘He’s someone I can work well with who has navigated the race twice before,’ says Walker. ‘But he’s also a very strong helmsman and trimmer – that’s what he did on the last race when he did not sail as a navigator. So we’ve deliberately strengthened our helm and trim abilities within the boat as opposed to going for a more old-fashioned navigator who sits down below making decisions.’

Not breaking the boat and the sails is obviously going to be of paramount importance but Sanderson is concerned that there will be little to stop crews pushing too hard when the playing field is equalised in a one-design contest. He is worried that the sort of disaster that befell Telefónica in the last race, when she broke two rudders and damaged a third while running in heavy airs, could happen again. ‘If that becomes the benchmark of how hard these boats are going to have to be pushed to win in the breeze, then we’re in trouble in my opinion,’ he said.

Race veteran Nick Bice is now in charge of the Volvo Ocean Race ‘Boatyard’ and he lends context to the question of whether to overbuild for what remains a grand prix contest: ‘The reality is these boats are still high-tech, high-performance racing machines and if we thought we were going to design and build a boat that is unbreakable, we are all doing the wrong race.

‘Rightly so, though, more time has been spent in areas where we can try to eliminate potential disasters to ensure all boats will cross the finish line. It is common knowledge that the winning team will be the team that can drive their boat the fastest but not forgetting another important factor: they still need to manage their boats at sea. A bit of a cliché, but “To finish first, first you must finish”. This is also why the Boatyard has been put in place, to cater for the unfortunate situation if we do have a breakage. Using smart logistics and the pooling of spares, if we do incur a crisis, we are going to be in the best position to deal with it in the history of the race.’

Matt Sheahan, the distinguished sailing journalist, was one of the first to go for a sail on the new 65 on Team SCA. He makes some telling points. First, the crews are going to push like never before, just as Sanderson fears they might. ‘Never before has a Volvo Ocean Race been down to how hard you sail the boat as much as this one will be,’ predicts Sheahan. Second, crews are going to have to be at their peak to win. ‘Never before has there been such a premium on crew handling and how you sail the boat – teams are going to need to be tougher than ever… and more skilful.’

And an interesting thought from Matt on going to windward after his day off Lanzarote on the SCA Farr one-design in the autumn: ‘All the crew knew at that time was that the boat was very tricky in a sea on the wind. It doesn’t dig in. It tended to go up over a wave and then the bow would get blown off – this made it a challenge to keep the boat pointing properly and the speed up. It was harder to keep on the boil than the Volvo 70s on that point of sail.’

So perhaps windward performance can be added to all the other variables that will determine the outcome of this even contest. Oh, and I forgot one more: luck. Every winning crew needs its share of luck and this race will be no different…