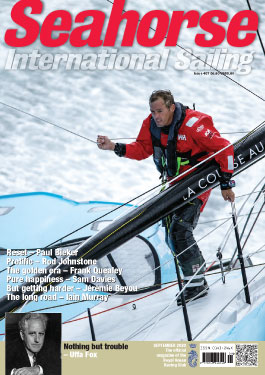 Overstepping the mark
ANDREW MCCIRVINE is not impressed when the sport’s governing body tries to stop owners enjoying their boats; and scares race organisers

Knife, gunfight
The new Bieker Moth is a thing of beauty; this we know already. And now we know it’s fast, too. PAUL BIEKER, LEOPOLD FRICKE and THOMAS HAHN

Seeds of battle
Back in the old days people really did fall out properly… then say what they thought without fear of the Twitter undead. So when UFFA FOX appeared on the yachting scene almost 100 years ago the establishment was ready to be rocked, especially his design rival FRANK MORGAN GILES. CLAIRE MCCOMB picks up the story

Setting the record – Part III
BRUCE FARR in the ascendant, the golden years of IAIN MURRAY and Color 7, the pure speed of DAVE PORTER and the first glimpses of a BETHWAITE tornado… FRANK QUEALEY

Blend of all the talents

IRC – The more is not always the merrier
Trust is at a premium when you mix a virus with a Maxi world championship. JAMES DADD

Sailor of the Month
No racing? That’s certainly news for some