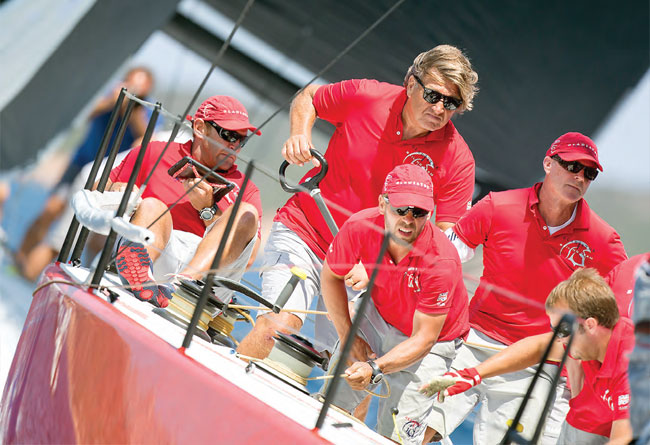 Just as sailors who collect bikes legitimately claim each has a purpose and a use, so Gladiator owner Tony Langley has gathered his mini fleet of three TP52s, each for specific requirements. The ebullient, passionate British owner may increasingly enjoy the variety of domestic corrected-time racing at home on the Solent and forays to the USA and the Caribbean to race, but the 52 Super Series is his pinnacle challenge.

Langley and his Gladiator team are one of the five crews who raced at the first ever 52 Super Series regatta, Barcelona’s Conde de Godo Trophy, in May 2012. And though his recent schedule has meant missing a couple of Super Series events to race at the New York Yacht Club his pursuit of perfection remains undimmed.

‘Of course I am competitive. In everything,’ Langley grins mischievously. ‘But if you go into the 52 Super Series and are super competitive and must win then forget it, because it is probably not going to happen. If you measure competitiveness by the need to win and the need to have shiny things at the end of the week, then no.

‘I just love the pursuit of perfection that you have to have to even have a reasonable finish in this series – everything has to be going well. And there are so many elements to getting a team firing on all 12 cylinders, and everything else being right as well.’

Being an engineer, and a rather successful one… in common with other Super Series owners, Langley is further enthused by the elements of design freedom and the need to make smart technical and personnel choices that are inherent in the TP52 and the 52 Super Series. The skipper of Gladiator is very much a hands-on owner-driver!

‘Tom Wilson takes care of the nuts and bolts of it. He reports to me in just the same way as one of our MDs would in one of our businesses. I have an active involvement in as much as I always know what is happening and I am actively involved with Tom in the management of it. I am certainly not doing his job for him, but I do selectively drill down into the detail.’

All three of his TP52s get regular use. Originally he bought the Matador which came with a bunch of old sails and became Weapon of Choice. The Gladiator name appeared when Langley bought the world championship-winning 2009 Artemis programme which is now the so-called C-boat that is on IRC duty in the Solent.

Main picture: Happy days... Tony Langley steers the previous Gladiator to a race win in Sardinia in 2016. The following year, with a new Botin design and Ed Baird as tactician, the team had more good results, only losing the final round in Menorca on a tie-break to Super Series champion Azzurra. In 2018, however, Langley’s programme was severely disrupted when a plan to combine forces with Ben Ainslie’s BAR was aborted after the world’s greatest Olympic sailor found backing from Ineos for an America’s Cup challenge; Ineos CEO Jim Ratcliffe’s laser focus on success being the stuff of legend, it was no surprise when Ainslie’s team were instructed firmly to concentrate on the day job. For 2020 Langley had lined up another multiple gold medallist, Iain Percy, as tactician for the European Super Series rounds – we expect that relationship to quickly bear fruit when racing eventually gets underway again

The next 2015 new-build Gladiator has gone to the Caribbean and was supposed to compete this year in Antigua. Finally for the 52 Super Series Langley now races the Botin design Gladiator which was bought as the freshly built but never campaigned Interlodge. She is now waiting ashore in Puerto Portals with the rest of the 52 Super Series fleet.

‘I love the TP52 because it is a super high-performance boat that remains relatively, and I emphasise relatively, forgiving. It is a 12-man boat which I like – in terms of teamwork this is the ideal size if you are chasing perfection around tight courses. And I love the speed and handling. It is superb, the balance and performance of the boat are just wonderful.’

In the period 2016-19 Langley has been doing 60-70 days’ sailing a year, which he says is ‘enough’. ‘It is a lot. I have a day job and to be honest I would not like to be doing more. There is a limit to how much you can do even with the three-boat programme.’

Lately he has used the B-boat in the USA and Caribbean and, like some other owners on the circuit, is a fan of the idea of opening a 52 Super Series season with two Caribbean regattas. Likewise in recent years he has come to enjoy racing out of Newport RI and reflects how cool it would be to have a TP52 regatta or two there.

‘It would be great, but equally you have to understand that it is June before Newport is really good and so you cannot ship the boats back in time for a summer season in the Med – that is a big commitment.’ He adds, ‘I always liked opening the season in Key West and it is such a shame to see it gone. Miami, as a standalone event, was also great.’

But the mix, he says, remains very important to him. ‘The B-boat is competitive against IRC boats but is not especially optimised for IRC and the C-boat is a more Corinthian boat in essence but it is still very competitive. It has won Round the Island a couple of times, Cowes Week a couple of times. I do like to mix it all up.

In particular Langley the owner-driver loves to pit himself against the best professionals. Trying to outgun America’s Cup-winning helm Ed Baird off the startline still thrills him. ‘Yes, it might not be on exactly equal terms… but you are on the same piece of water. To compete against the very best is what I enjoy. When you do well you know you have done well… and they know you have done well.’

He reflects, ‘What do you get out of it? You walk down the dock after you have sailed well and somebody like Ed Baird will say, “Well sailed today, Tony,” and that means everything. And hearing it, say from Terry Hutchinson or Vasco, and, and, and… Those guys… you don’t get it unless you have earned it.

‘It is a pro circuit and you have to be a certain type to spend a considerable amount of money and to go out there and get beaten into the dirt – that is what will happen sometimes even doing everything really well. And so it is not for everyone at all. Some people want the shiny things.’

Like an increasing number of the 52 Super Series owners, Langley is unequivocal when it comes to the choice of venues and destinations. ‘Look, I think going to really cool places is important. I want to sail in really, really nice places. I like the South of France and would like to see the circuit go to Saint Tropez. Current locations? Well, I do like Porto Cervo. And I enjoy sailing in Palma.’

That he sails with his very, very longtime friend Geoff Povey on all the Gladiators adds considerable pleasure to the experience. The two first sailed a rented Hobie Cat together many moons ago and sometimes Geoff is almost as much part of the Gladiator line-up as Langley himself. ‘We have been mates for more than 50 years, more years than we care to remember. Or should I say now more years than either of us can remember.’

Perhaps Langley’s most settled spell of consistency recently was with Baird as tactician in 2017, finishing second at the season’s final regatta in Menorca tied on points with regatta winners Azzurra. Sadly 2018 then saw a late reshuffle to a plan that was to have seen Sir Ben Ainslie’s BAR team sail with Langley, before the launch of the Ineos AC programme clipped the AC squad’s wings in terms of time spent away from the Cup programme. Unfortunately by then Baird had moved on to new and different pastures.

But the British owner-driver is proud to have sailed with so many of the very top names in the sport. ‘There are certainly gains to be made by having a stable team but that has not always improved my game.

‘I have always been clear about this. I want to work with the best. I want to look back and say I worked and learned from the best. To have stayed with relatively the same team over the last eight years I don’t think I would have got that (learning). I have worked with some very, very good people. The Best. And I have taken something away from my time with every one of them.’

And since that difficult 2018 season he has made a point of integrating new, young British talent into the Gladiator programme, ‘I like doing it. As I said earlier, I like mixing it up. You see them improving in front of your eyes, sometimes exponentially so – and that is very satisfying.’
Andi Robertson