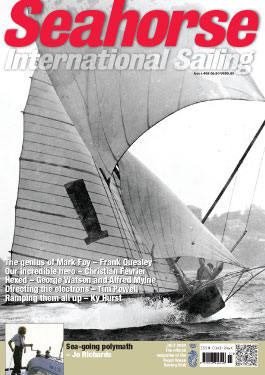 What’s next?
Both nationally and regionally there’s cause to be optimistic. Beyond the borders it’s down to what happens up there in the sky. ROB WEILAND

Setting the record – and the genius of Mark Foy
It’s now 127 years since the first race for what we now know as the Sydney Harbour 18ft skiff. One man set the ball rolling and as a result of his good judgement the results were almost instantaneous. FRANK QUEALEY

Master of the dark arts – Part I
Has anyone else ever achieved so much in the sport of sailing on the back of a degree in botany? JAMES BOYD talks with JO RICHARDS

Look back in anger
It all started so well when designer Alfred Mylne secured his dream posting with ‘the master’, GL Watson. But it did not last. CLARE MCCOMB revisits the yacht design row of the century

Sense and sensibility – Part I
Why did Team New Zealand’s cranked AC50 foils make such a difference in Bermuda in 2017 and how are the current Cup teams ‘solving’ that rather chunky AC75 foil arm? DAVE HOLLOM

A step up (in every sense)

Proof of the pudding

World news
The Vendée Globe is a go, after a chilly warm-up, getting that foil balance right, while trying not to break anything, BURLING and TUKE on the back foot (true), experts versus rookies – a tale of two lockdowns, a formidable track record… and lots to teach. Plus making the most of a (US) bargain. KY HURST, IVOR WILKINS, PATRICE CARPENTIER, BLUE ROBINSON, DOBBS DAVIS, PAUL MEILHAT, GUILLERMO PARADA, ALEX PELLA

IRC – Doing good (too)
The curious advantages of reducing stability. And electric power – is it (yet) for real? TIM POWELL

Sailor of the Month
Great sailors, even greater contributors