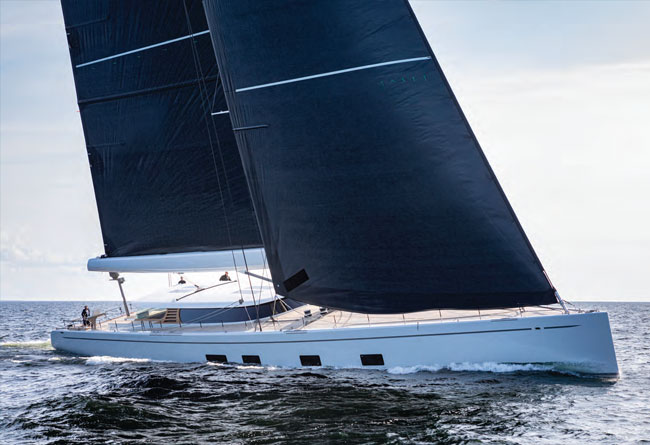 Baltic Yachts’ most complex, sophisticated and ambitious superyacht launched to date just keeps on improving with every outing

They say the proof of the pudding is in the eating. After several years in development the most eagerly awaited superyacht of 2019, the 142ft Canova, was launched late in the season by Baltic Yachts with the minimum of fuss.

Unlike the launch of a brand new racing yacht where you launch, step the mast, fit some sails and go straight into sea trials in a matter of hours or days, the coming together of this extraordinarily complex yacht takes a long time to complete. Baltic Yachts excels at balancing the desire to get sailing against the need to ensure all systems work safely and effectively, while respecting the boundaries that were pushed in the design offices. The Finnish summer weather was less than ideal for a team looking for testing conditions to push the yacht to the aforementioned boundaries. Nonetheless, in between the summer vacations of suppliers and balancing the wishes of all the interested parties, some meaningful sailing was somehow managed and boxes ticked.

Leaving from Finland in autumn presents a challenge if you wish to get somewhere warmer. As owners of yachts built in this region will attest, a high level of due diligence is required before leaving.

Main picture: Baltic Yachts’ 142ft sloop Canova is probably the most complex and sophisticated superyacht ever built with a wide range of groundbreaking systems and cutting-edge technologies onboard. Its stand-out feature is the largest DSS foil ever built, which exceeded even its inventor’s expectations in sea trials. Sailing at 15kts on a beam reach, the DSS foil reduced the yacht’s angle of heel from 30° to 18° in 20 seconds

The key areas of interest, beyond the groundbreaking hydrogeneration system and other innovative house systems, were of course the operation and effectiveness of the Dynamic Stability System (DSS) foil, the Rondal/Carbo-Link rig with its double deflector setup and the sail inventory, particularly the quadrilateral headsail.

Working with Infiniti Yachts on the refinement of the rig, foil and sail development enabled Baltic Yachts to tap into almost 20 years of experience in this critical symbiosis. When foils are added to the mix it is important to ensure other areas of the yacht that are directly affected by the foil, particularly the rig and sails, are developed in parallel.

By making a dummy DSS foil, Baltic Yachts ensured they were ahead of the game for the installation of what was by their own admission the most complex moveable appendage ever fitted to one of their yachts. The installation was completed in a couple of hours and signed off after a day of sea trials. It is testament to the team led by Roland Kasslin that something so complicated was considered at the conclusion of sea trials to have been the “easiest” of all the technical features of the yacht. The “simple” rope-driven system exceeded its targets when deployed under load and proved to be completely silent. Being located under the owner’s bed, this was non-negotiable.

We tested the DSS foil deployment with increasing load, the final sign-off test being with a heel angle of 30°, making 15kts at a true wind angle of 90°with a full main and J1. Without adjusting any sails or controls other than the deployment of the DSS foil, the heel angle was reduced to 18°in the 20 seconds it took to deploy the foil and the speed remained the same. For a superyacht of this ilk the DSS foil is designed to start working at a boatspeed of around 17-18kts.

The DSS foil’s performance exceeded our expectations. In early trials sailing upwind in 20-24kts of breeze and without using the trim tab on the keel, which would further improve performance, the difference when using DSS was a VMG increase of 0.25kt, a heel reduction of 30 per cent and a pitch reduction of 42 per cent. To put these numbers into context, it would take an extra 33,000kg in the keel bulb – the total displacement weight of an IOR maxi – to achieve the same heel reduction. The 42 per cent reduction in pitching is even more incredible. As the company engaged to run the said: “with DSS, the waves do not exist”.

The key driver for fitting DSS to Canova was to increase comfort for the owner and his guests on long offshore and ocean passages. Baltic Yachts have delivered and some.

The development of the sail inventory focused on the key drivers which were easy sailing, but more importantly, efficient sailing. The team studied and debated the merits of the quad sail for a significant time before committing to it. Infiniti Yachts had already developed a modern quad sail in a wind tunnel and used it in the real world, so it seemed an intelligent choice, but the decision was not taken lightly.

What we have learned is that the quad is a true breakthrough. It’s a workhorse sail that can remain hoisted in all conditions, unlike a racing code zero, and it has a much wider range and performance band than any other furling sail. The two sheets do add some work for the crew, but the proof of the pudding is that this is the most popular sail on board and is used extensively. 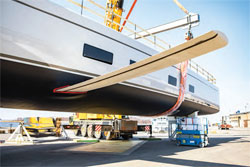 Above: the transverse sliding DSS foil is right under the owner’s cabin so its operation had to be silent. Sailing upwind in 20-24kts of breeze, the foil boosts VMG by a quarter of a knot while reducing heel by 30 per cent which means it generates the same righting moment as 33 tonnes of extra ballast in the keel bulb. Even that is less impressive than the 42 per cent reduction in pitching that the DSS foil achieves in the same conditions.
Below: the front half of the cockpit is sheltered by a long, solid bimini. Also remarkable is the hydro generating system that enables the yacht to operate in ‘silent mode’ for extended periods of time 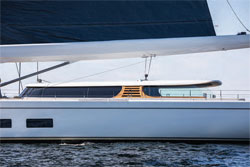 The quad sail in conjunction with the DSS were both tested extensively on passage from Finland to Genoa. On the passage across Biscay in January, Baltic’s after-sales representative, Sam Evans, who was aboard for the delivery, reported that the yacht was much easier to handle with the foil deployed, as boatspeed averaged between 20 and 22kts and topped out at 24kts. ‘We were sailing pretty deep at about 140- 150° (true wind angle) which isn’t the optimum angle for using the foil, but it still made a big difference,’ says Evans, who adds that they were sailing conservatively in terms of sail choice (a reefed main and staysail).

Evans predicts that the real benefits will become apparent on an ocean passage when the foil will really come into its own in terms of comfort and the crew will be able to take advantage of optimum wind conditions and sea state with the appropriate sail plan.

Mattia Belleri, the project manager and skipper of Canova, was particularly effusive in his praise of the quad: ‘I love it. I am constantly surprised at the performance gains and how versatile the sail is. We have sailed at 14kts in 9kts of wind, which for a superyacht of this size and displacement is fantastic.’

It is testament to the team at Baltic that a yacht of such complexity took on Biscay in January, with conditions that sometimes exceeded 50kts of wind, so soon after launching.

For a yacht that looked on paper to be perhaps overly complex with significant developments in sail handling, rig setup, sail shapes and geometries and retractable foils, it is particularly pleasing to see all these features performing as expected. The realisation of a vision held by the owner is the most pleasing thing for the team at Baltic. To be able to take a vision and deliver it whilst pushing boundaries, opening new frontiers and yet retaining the integrity and reliability for which the yard is renowned is no small achievement.

For the remainder of the year Canova will be sailing in the Mediterranean before stretching her legs further afield. During this time further studies and tests will be carried out with partners Bosch, in order to further understand quite how the DSS foil transforms the comfort levels for those fortunate enough to be sailing aboard.

The data logged and lessons learned indicate that this is just the beginning of the revolution and it’s reasonable to expect significant further gains in the next generation of superyachts. The DSS foil is proving to deliver a groundbreaking reduction in heeling and pitching, and the door is open to take even greater advantage of this technology, resulting in yachts that are lighter and more efficient but also more comfortable, which is contrary to the long held sentiment that weight delivers comfort. The additional performance has knock-on benefits for the green credentials of the yacht as hydrogeneration is more efficient thanks to increased performance. In marginal conditions, the DSS foil can often offset the drag penalty of the hydrogeneration.

Green credentials are not simply about low emissions but a quantum step forward in system management aboard the yacht. With regeneration that develops 35kW at 20kts of boatspeed it is entirely possible for Canova to cross oceans without resorting to diesel power in any form. This is unheard of for a superyacht and a testament to the R&D programme and investment that Baltic Yachts has made.

It is not just about the performance, we are seeing gains across the board in this gamechanging superyacht, and this is very much just the beginning. The next generation yacht of this ilk could be even lighter whilst maintaining the qualities, comfort and features that make a Baltic yacht unique.