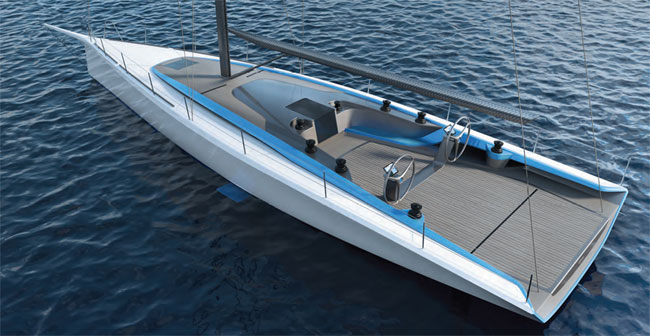 The Infiniti 52 is the first modern racing boat to be designed and engineered to take full advantage of Doyle Sails Cableless technology – built around a highly efficient, single transverse DSS foil, providing proven performance but without the cost of more complex class-driven foil solutions. The DSS foil provides significant righting moment which allows you to design the boat for a smaller crew, sometimes half the number of a comparable yacht.

According to Stu Bannatyne, four-time Volvo Ocean Race winner, though DSS has been around for a long time only recently has it started to gain mainstream traction: ‘I have raced and sailed on many foilassisted monohulls – including Rambler 88, Wild Oats XI, Charal (Imoca 60), Wild Joe and Maverick (Infiniti 46),’ he says. ‘All of which provided valuable input into the ideal foil arrangement and concept for the new Infiniti 52.’

A simple-to-operate and reliable single transverse foil gives the best solution for this target market – a foil that starts working at low boat speeds (around 11-12kt) when reaching and running to provide righting moment and reduce displacement resulting in a faster, more comfortable ride.

Main picture: the new Infiniti 52 is the first yacht designed and engineered to maximise the competitive advantage of Cableless sail technology. With only half the headstay loads of a typical modern 52ft racer, there is scope for dramatic weight saving in all of the hull and rig structures.
Below: the forerunner of the new 52, the Infiniti 46 Maverick has proven herself to be able to beat TP52s on the water in spite of being 6ft shorter

‘At higher speeds (16kt+) the foil will provide really significant gains resulting in speeds far superior to 50-60ft traditional monohulls’. When upwind sailing in heavy airs and/or waves it will act as a stabiliser – reducing pitching and making the ride more comfortable and faster!’

When looking for gaps in the market, popular wisdom would suggest that 52ft is a little crowded in the performance sector, so you need to bring your A-game – something that redefines the genre.

Traditionally 52ft has been a good size for both inshore racing and coastal/offshore racing. It is is big enough to be comfortable offshore but small and light enough to have that exhilarating dinghy-like feel. Two versions of the Infiniti 52 have been developed, the R for racing-focused owners and the RC for those who would like to combine a more versatile interior with the outstanding performance.

The top requirement for potential owners was a competitive platform that can be raced or cruised with minimal maintenance, crew and systems, and so, coupled with the single DSS foil option, we settled for an appendage package with a fixed keel and single rudder.

Central to the design philosophy was an efficient, reliable swept threespreader carbon mast with a sail and rig plan optimised for coastal racing, plus a workable, comfortable yet lightweight interior with standing headroom, good bunks and a heads/shower option.

With a very efficient triple heading configuration designed for early use of single and multiple staysails when reaching and downwind, performance jumps markedly compared with existing set-ups for this size of boat.

Utilising Doyle Sails Cableless technology during the early design phase enables the rig compression and sail loads to be reduced by up to 50 per cent, resulting in reduced weight for mast, rigging and boat structure – a huge driver for overall improved performance and comfort.

The final sail inventory is tailored to suit each customer’s racing programme and the applicable rating rules. Extensive use of Doyle Sails CFD tools means that every sail is optimised to ensure smooth crossovers and optimum performance.

Finally, the design needed to look awesome – fast can be seriously good looking!

When you set out to sail with a small crew you have to focus on efficiency. The Infiniti 52 combines many synergistic design features, resulting in a fast, easy and fun boat. The design team includes experts in rig design, sail design, interior/ exterior design styling, engineering and naval architecture. This is a yacht designed holistically, as opposed to separate parts combined. Benefiting from 15 years of designing and building different foil-driven yachts, it sets a new standard.

On top of the extensive design process, several independent studies were undertaken using recent race data from yachts of the same size, comparing different design elements and VPPs for the same races. Historic data was then compared with different rating bands. This process clearly identified where the design could be improved and the strengths and weaknesses of each iteration leading to the final package. The design evolved constantly in partnership with the sail design and development, taking into consideration subtle alterations in foil geometry and dimensions.

Above: a very clean and simple deck plan with all controls led back to just four or eight powered winches and a sailplan optimised for coastal racing with three sets of sweptback spreaders and a very long bowsprit.
Below: the pure racing version of the Infiniti 52 has a stripped-out lightweight interior that is practical for offshore passage racing with comfortable bunks, standing headroom and a heads/ shower option. A racer-cruiser version with an ownerʼs cabin in the forepeak and a well equipped galley is also available

‘Tank testing, CFD and other tools are key parts of the design process,’ explains the Infiniti 52’s designer Hugh Welbourn, ‘but equally important are the results from existing DSS yachts and feedback from skippers and navigators. All of which has been brought together into a design that redefines the genre. Watching the Infiniti 46 sail past most of the TP52s in the 2019 Sydney-Hobart Race and in the final approach to Tasmania be in front overall of the eventual winner, Ichi Ban, prove that the potential for a larger Infiniti yacht to be competitive is very real.’

The question is always asked about the rating and when use of the DSS pays? The key is to have a foil that works over as wide a range of conditions as possible, both in terms of wind speed and true wind angle. The single transverse DSS foil has optimised geometry to provide good lift/drag ratios at low to moderate speeds, enabling an early transition from displacement sailing to the faster high righting moment, lower drag and smoother sailing regimes.

Composite Builders, based in Michigan, USA, are partnered with Infiniti Yachts as the exclusive builder of the Infiniti 52. Led by Brian MacInnes, Composite Builders have an impeccable track record in performance. After four America’s Cup campaigns with the Oracle Racing team resulting in two USA victories and two winning Volvo Ocean Race teams, ABN Amro and Team Ericsson, MacInnes brings a wealth of experience in producing racewinning yachts. ‘Having raced at the top of the sport for 30 years and knowing what it takes to win I was seriously impressed by the Infiniti 52 and the team who developed it. A yacht like this is the reason we set up Composite Builders, to be able to build the best and to have a yacht that matches our skillsets as builders,’ says MacInnes. ‘We’re perfectly set up for producing these yachts and expect to have the first one sailing this winter. Our resources include CNC capabilities and a team of machinists, allowing us to build complex tools and moulds inhouse.’ Composite Builders can also automate precision fabric cutting, core cutting and finish detailing as well as having flexibility to cure parts under high compression and a large 2,300sq ft batch oven.

A simple system of powered winches and sail controls means that a crew of eight can handle the boat easily without any compromise in performance. They can race it hard by trimming sails efficiently 24/7 to ensure the maximum performance benefits are extracted from the sails and DSS foil. Fewer crew actually means more performance when using the DSS foil.

The 52-footers have dominated all types of racing in recent years and the Infiniti 52 builds on that pedigree. By starting with a very efficient size and optimising it for coastal sailing, the overall package is ready to win races.

The racer/cruiser version was developed from the same hull. It benefits from a more versatile interior with the forward area able to be utilised as a master cabin, with en-suite heads. The galley is more appropriate for short-handed sailing with friends and family but also perfectly appointed for offshore racing and passages. The mainsheet is handled by a captive winch, reducing the amount of rope in the cockpit, and there is a self-tacking jib. This allows the 52 to be sailed and enjoyed two-handed while retaining performance and thrill.

Tests on the Baltic 142 Canova reveal that the DSS foil reduces pitching by 42 per cent and heeling by 30 per cent, so there is much less need for crew on the rail and the RC version takes advantage of that.

Gurit have been involved in the development of DSS for the past 15 years, working alongside the designers and builders for projects as large as the 142ft Canova and as groundbreaking as the Infiniti 46 Maverick. ‘The Infiniti 52 allows us to benefit from their extensive experience in not only the TP52 class but also the current generation of foiling IMOCA 60s, ensuring a structure that is not only extremely light and stiff but robust enough for offshore sailing,’ says Infiniti Yachts managing director Gordon Kay.

Over the years Gurit have engineered dozens of DSS foils, without a single failure. As for all Infiniti yachts Gurit materials are used, which have repeatedly proven themselves to be the leader in the market for performance and reliability. The rudder, quadrant, bowsprit and DSS foil are supplied by Isotop Composite in France, long regarded as leaders in the supply of high-quality carbon appendages.