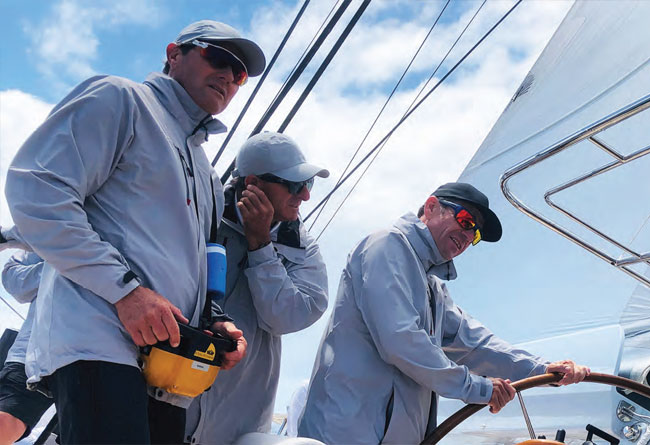 Powering 100-foot supermaxis and giant superyachts, winning the Maxi72 worlds, equipping the Vendée Globe favourite and infiltrating the fastest giant French multihulls... Doyle Sails is on a mission to win everything

For Doyle Sails International’s CEO Mike Sanderson, who was tactician and sailing master on Comanche, the result was testament to great sailing by a dedicated crew, outstanding navigation by his longtime friend Stan Honey, huge commitment from the owners – and a great showcase of the Cableless and Structured Luff technology Doyle has developed.

‘It was a fantastic race for that technology and really brought the benefits to the forefront,’ he says. ‘As soon as we cleared the last turning mark out of Sydney Harbour, we pinned her ears back and let her rip.’

Comanche sailed a wide arc, well east of the rhumbline down the mainland coast and then angling back in towards the finish at the Tasmanian capital. ‘We sailed the boat to her strengths,’ says Sanderson. ‘We knew exactly where we wanted to go. We set up a triple headsail arrangement with the nonoverlapping J0 in front, a J2 staysail and a storm staysail, inside. We got all the way down to VMG running angles with a non-overlapping jib on, which is pretty cool.

Main picture: Mike Sanderson (at the helm of Aquarius), Volvo Ocean Race winner and chief executive of Doyle Sails, has led a major R&D drive with new performance enhancing technologies such as Cableless code sails and Structured Luff headsails. At the same time he has also made a major investment in human talent, recruiting other top professional sailors to expand the sail loftʼs knowledge and practical experience, including fellow Volvo winner Stu Bannatyne (below) who leads the Doyle Sails Grand Prix team 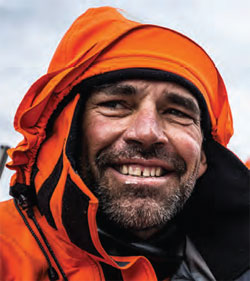 ‘We saw how strong and efficient the J0 concept is. They are very powerful weapons. That sail configuration did a lot of work through the race, as did a Cableless A3. It was a great demonstration of the technology at work.’

Infotrack’s performance close behind was particularly pleasing as she had always struggled against the narrower Wild Oats XI and Black Jack. “Infotrack carries a big Doyle inventory and is fully stacked with Cableless and Structured Luff technology. For her to finish second was very gratifying.’

Nor was Doyle’s involvement confined to the 100-footers at the front of the fleet. Spread throughout all the divisions competing in the 75th anniversary of the classic race were 37 yachts carrying Doyle sails in their inventories, including the hotly-contested TP52s, with Ichi Ban finishing first overall on handicap.

The line-honours battle of the big guns in these classic offshore races is intense, showcasing the best technology and the best talents of rock star crews. Sanderson gave an indication of the fierce concentration involved when he said losses and gains were calibrated in metres, not miles. ‘It’s about gaining every metre we can, every minute of the race all the way to Hobart. That’s what we have to concentrate on for the entire 628 miles of the race,’ he says.

For the past couple of years Doyle has pushed hard with its Cableless and Structured Luff concepts, which offer great benefits of reduced luff sag, weight and mast compression.

At Sanderson’s direction, Doyle has also made a major investment in human talent, bringing on board a wealth of grand prix, America’s Cup and offshore experience.

The Sydney Hobart showed how that investment works in practice. Sanderson himself lists three America’s Cups and two Volvo Ocean Race victories on his resumé.

He is usually joined on Comanche by Chris Nicholson, head of the Doyle Macquarie loft. Nicholson is a twotime Australian Olympic sailor and three-time world champion in the 49er class and has sailed thousands of offshore miles competing in five Volvo Ocean Races.

For the Sydney-Hobart Nicholson switched to Infotrack so his place on Comanche was taken by another Doyle pro, New Zealander Stu Bannatyne. He is one of the most experienced offshore racers in the world with eight Volvo Ocean races (including four victories), eight Fastnet Races, three Transpacs and 11 Sydney-Hobarts on his resumé. ‘Not a bad exchange,’ Sanderson agrees. ‘It all comes back to our policy of getting great guys involved with the brand. That kind of talent runs right through the company.’

Does a one-two finish in a high-profile event mean that new clients greet their arrival on the Hobart dock and flood them with sail orders? Not really, but it does raise the profile and credibility of the brand and the technology behind it.

It is a step-by-step process that proved itself on the Maxi72 circuit where Sanderson’s involvement with Hap Fauth’s Bella Mente programme saw Doyle making steady inroads. ‘On the strength of Bella Mente, Momo followed and then Cannonball and all achieved success at the Maxi Worlds,’ Sanderson affirms.

‘You do not have to look back very far to a time when Doyle wasn’t even getting opportunities to submit proposals for major campaigns,’ he says. ‘Now it is a very different landscape. People have a choice and we are part of that choice.

‘Getting these results brings us to the attention of people who might not have considered Doyle Sails for their performance superyacht, or a new Code Zero, or a Structured Luff headsail. More and more we are seen as a serious player in the grand prix and superyacht arenas.’

Although Doyle’s international profile has enjoyed a steep rise under Sanderson’s direction, he has been careful to concentrate resources in specific areas. ‘We have developed a wonderful team and our energies are devoted to three large categories: superyachts and grand prix racers, while the majority of our lofts service local racing and cruising yachts. That is how we divide our time.’

The next big target is France, global leader in the multihull scene. This push is being driven from the Doyle UK loft by Brian Thompson – ‘one of the most accomplished English-speaking multihull sailors in the world’. Like Honey, Thompson was part of Sanderson’s victorious crew aboard ABN Amro One in the 2005-06 Volvo Ocean Race.

Thompson is an accomplished multihull sailor with an apparently unquenchable thirst for sailing around the world. He set a circumnavigation record with American adventurer Steve Fosset in 2004, won the 2005 Oryx Quest with Doha 2006 (ex-Club Med), won the Volvo Race with Sanderson, finished fifth in the 2008 Vendée Globe and was a helmsman/trimmer for Loick Peyron on the maxi-multihull Banque Populaire V, which claimed the Jules Verne Trophy in 2012.

Above: the Doyle Sails equipped Comanche won the hotly contested battle for line honours in the latest Sydney Hobart Race, sailing a wide arc to the east of the rhumb line and making good use of this triple headsail set-up; Doyle CEO Mike Sanderson was onboard for the race as tactician.
Below: Doyle Sails is also now enjoying consistent success on the Maxi72 circuit where three of the leading teams are now racing with Doyle sails 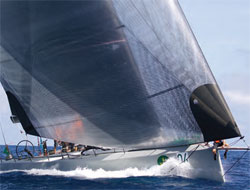 ‘The French multihull market is virtually untapped territory where our Cableless and Structured Luff sails offer a big performance boost.’

In similar vein, ongoing work with Alex Thomson’s HUGO BOSS for this year’s Vendée Globe race will be closely watched by the French contingent. ‘It is busy times for Alex with the Vendeé approaching this year,’ says Sanderson. ‘He is our big hope for the Vendée Globe. Alex is always known for his blistering speed. We certainly hope that this time he goes one step further to the top of the podium. He has a very strong team with a lot of data and a lot of history behind him.

‘Alex is showing some big gains with our technology and, for our part, we need to make sure that everything we do for the HUGO BOSS programme is 100 per cent reliable. This Vendée Globe provides a great line in the sand for our brand in that respect.’

Sanderson’s conviction about the efficiency of Cableless and Structured Luff products is not so much about where it was last year or where it is now. It is about where it is continuing to go. ‘The potential is still huge. Last year I said we were just scratching the surface. The development remains ongoing. We have a mantra that every sail we build must be better than the last one. We keep pushing ourselves on that.’

Claims of major reduction in weight and mast compression combined with improved performance might sound like those warnings about financial advice: if it sounds too good to be true, it probably is. Yet Sanderson insists the science is irrefutable.

‘The industry has accepted it as being the future. Mast makers and naval architects are not disputing the positive advantages. We have race boat projects as we speak where masts are being designed in line with the reduced loads derived from using these products. Every superyacht project we are involved with is using this technology to some extent and half of the new-build projects are exploring going all-in with it and taking it to its full extent.

‘Taken to its logical conclusion, this genuinely could be the first thing in a long time that will bring down the price of superyachts and make them nicer boats to sail.

‘The people behind these projects take nothing for granted. They rely on the accuracy of modelling and the tools available now are incredible. They need to be, because lives are at stake and a lot of money is involved.

‘Any computational process does not give you a concept but it can provide accurate answers to specific parameters you feed it. The answers coming from these tools show what Cableless and Structured Luff sails are capable of and real time data we are getting off existing boats is matching those answers.

‘That, in turn, is giving yacht owners comfort. That process is happening at good speed.’