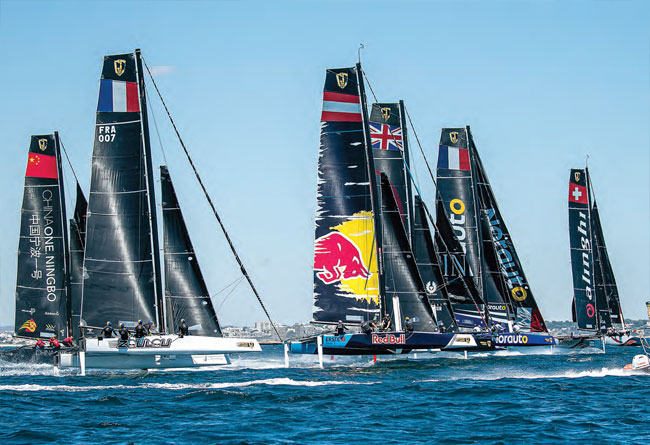 A seventh season of racing for the one-design foiling catamarans of the GC32 Racing Tour dawns in 2020 with competition resuming in Muscat, Oman in March. Alinghi, with Arnaud Psarofaghis helming, scored a decisive victory off the Al Mouj Marina in November, handing them the 2019 GC32 Racing Tour crown. However, this year the local team fielded by Oman Sail will want to set the record straight, after the Adam Minoprio-skippered Oman Air was neck and neck with Ernesto Bertarelli’s team throughout 2019, only to be beaten rudely on home waters.

With the demise of the Extreme Sailing Series at the beginning of last year the GC32 Racing Tour enjoyed a fresh influx of proteams. In addition to Alinghi and Oman Air, this included Tornado Olympians Roman Hagara and Hans Peter Steinacher’s Red Bull Sailing Team, who joined the Tour’s defending champion, Franck Cammas and Norauto, plus match racing world champion Phil Robertson and ChinaOne Ningbo and Ben Ainslie’s Ineos Rebels UK. With SailGP and the America’s Cup World Series offering precious little racing time, these teams have been using the GC32 Racing Tour to help them get race fit.

But on the racecourse the pro teams haven’t had it all their own way. Last season Erik Maris and his Zoulou team, with a crew led by America’s Cup veteran Thierry Fouchier, won the GC32 Racing Tour’s owner-driver championship and came fourth overall. To Maris’s delight his team finished the GC32 Oman Cup second, beating both Red Bull and Oman Air. As Maris enthuses: ‘It is daunting as well as very inspiring, but that is the reason I am here: to sail against these guys and get my arse kicked – it’s perfect, it’s what I like!!!’

Before joining the GC32 Racing Tour Maris passed through all manner of onedesigns, initially monohulls (he was Swan 45 European Champion in 2003, and won the Mumm 30 Worlds in 2005 before moving into the Farr 40), latterly cata - marans (Extreme Sailing Series and D35s). He bought his GC32 in 2015, but didn’t join the GC32 Racing Tour until 2017.

‘The GC32 was different compared to everything I’d experienced, thanks to the foils,’ Maris recalls. ‘I was expecting foiling to become a “must” even before trying the GC32. Sure enough, once you’ve tried it, it is hard to do anything else.’ Simon Delzoppo, owner of .filmRacing, agrees: ‘It is a real buzz every time you sail the GC32 – win or lose, you always have a great time.’

Race management is now well refined with a mix of reaching and upwind starts, determined by wind strength, and a strictly policed safety zone around the racetrack monitored by the safety officer. But it is the flying machine itself that remains star of the show, the only ‘boat-sized’ flying cata- maran to gain international class status.

Generally agreed is that the GC32 is the right size. This enables everything – rig/sails/foils – to be operated by rope, even foil rake is trimmed via a rope-operated worm drive. If the boat were any larger hydraulics would be unavoidable, adding weight and complication. Similarly the rig is a standard catamaran set-up comprising a rotating spar, two shrouds and forestay and just four sails – main, two jibs and a gennaker – limiting cost and allowing crews to focus on foiling (this aspect is made easier by the GC32 having relatively, for her size, large foils compared with an AC catamaran).

Yet the GC32 still routinely achieves 30kt+, maxed out at speeds approaching 40kt – plenty fast enough for most. In fact, if the foil package is ever upgraded – which has been considered but so far rejected by the class – the aim will be to lower the take- off speed rather than raise the top speed.

Below: they may no longer be a feature of the America’s Cup landscape but the Alinghi team remains a powerful force in high-performance sailing. As well as the regular victories on the Swiss lakes in overpowered super-light cats the Swiss team is not afraid of waves either, taking the Extreme Sailing Series before last year switching to the GC32 Racing Tour. Then in June they won the GC32 World Championship at their first attempt with two races to spare... and later the GC32 Racing Tour itself. Reaching starts on the GC32 Racing Tour (main image) take place typically in 10-19kt of wind – with the added ‘pile into the first corner’ element familiar to followers of SailGP and the previous America’s Cup World Series 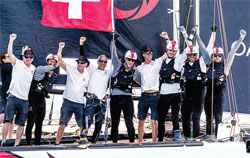 ‘The feedback I have got is that none of the teams are complaining that the top speed is too low,’ confides Martin Fischer, GC32 designer and head of design for the Luna Rossa Prada America’s Cup challenge. ‘With bigger foils you could achieve better light-wind performance, but if you did that you would also have to increase the elevator [rudder foil] size and at the moment it works fine. To me the class seems healthy – so perhaps you shouldn’t change it.’

The GC32 currently lifts out in 7kt of wind or 15-16kt boat speed and new foils would only reduce the latter to 13-14kt. While it doesn’t foil upwind as readily as an AC/F50, in enough wind it will, especially if you sail in a faster groove.

‘Initially the GC32 Racing Tour was oriented more towards owner-drivers, with good venues and good-quality racing, but in fact it suits all sailors,’ says GC32 manager Christian Scherrer. ‘At present most racing teams – pro or owner-driver – only consider keel boats, but that’s wrong because over the next 20 years we will see more and more foiling boats and with the GC32 there is no reason owners can’t enjoy that right now.’

As usual with a sophisticated one- design, the purchase price of a boat is typi- cally less than annual running costs, with secondhand boats available for ⇔150- 200,000 (see Seahorse brokerage).

The GC32 is certainly not recommended for first-time sailors but it is ideal for any- one with solid relevant experience, espe- cially in A-sail type monohulls or multis. To date GC32 owner-drivers have come from keelboat classes (for example, Jason Carroll and Naofumi Kamei, who both campaigned Melges 32s) or are grown-up dinghy catamaran sailors like Simon Delzoppo, Federico Ferioli, GC32 creator Laurent Lenne and Christian Zuerrer.

Argentinean Federico Ferioli previously sailed F18s as well as foiling F20s and A-Class catamarans, ‘so I had some idea of what foiling was about... but the GC32 is different as it demands slicker crew co-ordination. It is a technical boat but very possible to master with training. For me competing against the best in the world is unique... especially as every now and then we beat them!’

For newbies GC32 racing might look both terrifying and difficult, but the initial impression soon turns into ‘exhilarating’ and ‘surprisingly easy’. Former America’s Cup skipper Sébastien Col, who is one of the most capped GC32 tacticians, explains: ‘It is quite easy to steer the GC32 because you rely a lot on heel angle. Once you get the fact that you have to sail as flat as possible upwind and downwind, then it is quite easy even for someone who isn’t very experienced in multihulls.’

Even the very high speeds new owners quickly get used to, although with the GC32 generating such high apparent winds it can feel as if you are always racing upwind. Harder to master are the reaching starts.

The advice for new skippers is, initially at least, to gather a crew with as much GC32 experience as possible – and fortu- nately today there is a large pool from which to choose. That and a decent coach. Given that owners are typically shorter on time than they are on money, this ensures teams start from a higher level and make optimum use of their training. Otherwise, Col advises that it is little different from running a one-design keelboat campaign – required are budget, sound preparation, the right people in the right positions and an agreed policy on sails for the year.

The elephant in the room is of course capsize – an inherent danger racing any multihull. ‘People are scared about that, but it is not a big drama,’ says Col. In fact, the experience is usually no worse than a severe broach in a monohull.

GC32 crews are obliged to wear crash helmets and body armour from suppliers like Forward WIP, but pitchpoling is actually rare and the terrifying bearaway around the top mark (the ‘danger zone’ for lesser multihulls) is less scary when your leeward bow is flying high out of the water before you start to turn. Capsizes, if they do occur, typically take place laterally and more slowly. Following a capsize the boat is normally quickly righted (the GC32’s safety team and support RIBs know how to do this quickly and safely) and is often able to make the start of the next race.

The GC32 Racing Tour continues in 2020 with another five-event series, largely based in southern Europe with all venues chosen to offer the optimum conditions for GC32 foiling. Kicking off the season will be a return to Oman where the boats have wintered. The fleet then returns to Europe for Riva del Garda at the end of May before moving on to Lagos, Portugal at the end of June. The 2020 GC32 World Championship will take place at the Italian tourist hotspot of Villasimius in southeast- ern Sardinia... complete with its flamingos and Capo Carbonara nature reserve.

For its fifth and concluding event of 2020, taking place over 21-25 October, the GC32 Racing Tour will then travel to an exciting new venue, one famous for its reliable wind conditions and flat water... to be announced soon.
James Boyd