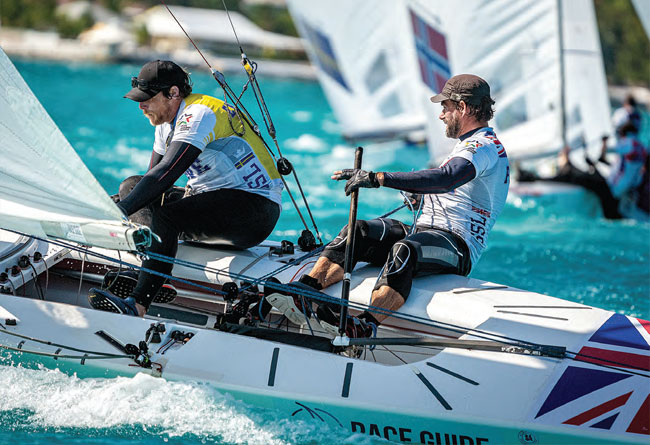 There is surely no fairer way to describe the latest Star Sailors League Final in Nassau, nor the standing of the winning crew. James Boyd suffered the rigours of a winter trip to Nassau to watch Iain Percy’s return to the class in which the Finn gold medallist of Sydney 2000 took a further two Olympic medals – one silver one gold – with his much missed friend Andrew Simpson

For the elite in our sport Nassau in the Bahamas has become an annual pilgrimage for the ultimate international invite-only ‘best of the best’ event, the Star Sailors League Finals and its US$200,000 prize purse. While the SSL Finals happens to take place in Star boats, the name refers to the event’s aim of determining the annual ‘star’ of the sailing world. In December there are few better places to sail than Nassau’s Montegu Bay, well protected with its shallow, warm, Bahamas Tourist Boardpromised turquoise water.

In the early years of the SSL Finals inevitably the Star boat specialists dominated – Robert Scheidt and Bruno Prada claimed the first event in 2013, followed by Mark Mendelblatt sailing with Brian Faith in 2014 and 2016 and George Szabo and Edoardo Natucci in 2015. Since then this has been less true, with Laser and Moth champion Paul Goodison and Frithjof Kleen winning in 2017 followed by Finn Gold Cup winner Jorge Zarif and Pedro Trouche in 2018. However, the 2019 event did see the return to heroes of the Star class, perhaps due to a lighter attendance of Olympic and America’s Cup sailors because of commitments to parallel rival campaigns.

For the seventh SSL Finals in 2019 the field was the most international with a record 22 nations represented among the 23 teams and 46 sailors. These included for the first time Spain (in seven-time roundthe- world veteran Roberto Bermúdez de Castro, who campaigned a Star at Athens 2004), Uruguay (with former Snipe World Champion Ricardo Fabini, runner-up at the 2019 Pan-American Games) and South Korea (three time Olympic Laser sailor and triple Asian Games champion Ha Jee-min).

British triple Olympic medallist Iain Percy had been understandably reticent to return to the Star following the death of his longterm crew and best friend Andrew Simpson. Percy has been trimming main on Artemis Racing in the 44Cup alongside another close friend of Bart, former Freddy Lööf crew Anders Ekström, also a Star world champion and Olympic medallist.

It was Ekström who had lured Percy back into the Star for the first time for the 2018 Bacardi Cup, where they finally got in their stride on the last day winning the final race. They competed in the SSL Finals in 2018 too, but this was cut short by Percy having to attend the launch of the shortlived Malta Altus America’s Cup challenge. A year on, with families left at home and no distraction save for meeting old friends, they were giving it their all.

The SSL Finals has a race format similar to match racing, four days of Qualifying to determine the top 10 who progress through to a ‘Super Saturday’, comprising Quarter- Finals, Semi-Finals and Finals. The Quarter- Finals are for positions 3-10 from Qualifying (the winner of Qualifying fast-tracks to the Finals; second place to the Semis). The bottom three in the Quarter-Finals are eliminated as they are in the Semis, leaving just four boats in the Finals.

In Qualifying Percy-Ekström showed moments of brilliance. On the opening day they should have won the second race but were pipped by Hamish Pepper and Brazilian Pedro Trouche, the 2018 SSL Final-s winning crew. On day two they put one in the net, claiming the second race – following a dramatic first race when they had Chinese gybed (a first for Percy in the Star) pitching Ekström overboard, an episode that Percy later admitted was down to him lacking strength to hang onto the main in the brisk conditions.

Percy-Ekström put in a solid third day of qualifying leaving them second overall behind Kusznierewicz-Prada but then blew it on the final day finishing 21st in the last race, dropping them to sixth overall. Nonetheless, on a day when all eyes were on the mid-fleet, with those below 10th set to be eliminated, Percy-Ekström had made it through.

The Anglo-Swedish rollercoaster ride continued on Super Saturday. In both the Quarter-Finals and the Semis they found themselves in the relegation zone, only to recover: picking up a penalty at the leeward gate in the former, but sailing an amazing second beat to pull back to third, while in the latter they were fourth at the second weather mark, then picking up a vital place to gain the very last berth in the Finals…

Main picture/below: no one at the Star Sailors League Final or elsewhere in the Olympic and America’s Cup sailing community will have failed to have been moved by Iain Percy’s success racing in Nassau with another former Star World Champion Anders Ekström – who was responsible for persuading his friend and Artemis CEO to step back into a Star in 2018 for the first time since the death of Andrew Simpson in San Francisco in 2013, just one year after the pair’s last Olympic appearance at London 2012 where a third gold medal slipped out of their grasp in the final seconds of the Olympic regatta. 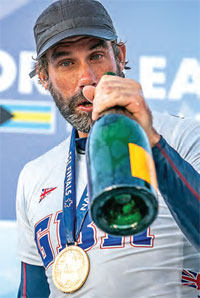 If this weren’t drama enough, in the Finals the four teams were still neck and neck up the second beat, with Percy-Ekström nosing ahead at the top mark. On the final run they and Rohart-Ponsot gybed early but, as the breeze went soft, Norwegian-US duo Eivind Melleby and Josh Revkin looked threatening in their own breeze. Coming into the line the whole trio were overlapped, crews rocking and pumping frantically. In a photo finish Percy-Ekström were ahead by centimetres, enough for the Olympic legends to be crowned the 2019 champions of the SSL Finals (this must have been at least a little cathartic for Percy – the last time he finished a major Star race overlapped with a rival was racing a Star for the last time with Bart against Robert Scheidt at London 2012, the Brazilian surfing ahead in the last few metres to deny Percy his third gold medal). Mention should be made of 25-year-old

Scottish Laser sailor Lorenzo Chiavarini who, sailing with German Kilian Weise, won the Quarter-Finals and finished fifth overall in Nassau, and Oskari Muhonen and Ukrainian Vitalii Kushnir who were eighth.

So where now?
The last few months have seen a dramatic expansion of the SSL Ranking, from which the top 10 get an automatic invitation to the SSL Final. For the uninitiated the SSL Ranking is a hugely ambitious but carefully researched scheme to combine the rankings of all the major international sailing classes – dinghies, keelboats and multihulls (starsailors.com/ranking). This now includes results from the past two years, from the Olympic classes to the TP52 and RC44, to the Moth, to large but localised fleets like the Albin Express (Scandinavia) and the Surprise (France and Switzerland).

The SSL will get up to full steam by 2022, the year after the first SSL Gold Cup has taken place, says the SSL’s sports director Frithjof Kleen. The Finals will be preceded earlier in 2022 by SSL Grand Slam events, as Kleen states: ‘We’ll have three Grand Slams, three different types of racecourse, and then people can focus their training and if you do them all you can make a living out of it.’

These will be like the 2019 Breeze Grand Slam (which doubled as the Star Europeans on Lake Garda) or the City Grand Slam (as run in Hamburg in 2015). These Grand Slams will also enable non-Olympians to gain valuable SSL Ranking points so they can compete with the Olympic sailors.

Meanwhile, the SSL’s own fleet of Star boats continues to grow at around four boats each year – all new Follis identical to Mark Mendelblatt’s London 2012 steed. The aim is to have three fleets of identical Star boats on hand – one in Miami ready to be shipped to Nassau, plus two more in Europe, one somewhere north, like Hamburg, the other moving between the training base in Riva del Garda and the SSL’s HQ at Grandson on Lake Neuchatel.

Despite being a tweaky no-spinnaker 110-year-old design, the Star continues to hold a strong fan-base among the world’s very best sailors. But, used for the SSL event, provided there is an experienced Star crew onboard to help with set-up and sailing technique, good sailors with no Star background have proved that they can quickly be competitive. As Kleen puts it: ‘In the Star talented sailors from other classes can do well right away in lighter conditions… And if they trained a little they can also do well in a breeze!’

The SSL Finals has received criticism for its lack of women. However, Kleen argues that, especially in terms of crew weight, the Star only works as a boat to equalise male competitors: ‘A 49erFX girl couldn’t compete in the Star with Xavier Rohart. Already the 470 guys struggle.’

To help level the playing field, for 2020 they may replace the Star crew weight formula with a fixed crew weight of around 180kg – a reduction of roughly 20kg.

Plans are being considered to hold an SSL Finals for women, but this will be in a different boat. ‘You need separate women’s finals and men’s finals,’ continues Kleen, who reckons the Snipe might be a good choice. ‘Serena Williams does not play Federer. For me it would be cool to see who are the best women and not the best mixed teams.’

At this year’s SSL Finals it was also encouraging to see some up-and-coming Star crews. While there remain all the highly experienced Olympic campaigners, a new generation is coming through, as demonstrated by Pedro Trouche, now 28, who won the SSL Finals in 2018, or 25-year-old Kilian Weise. With the Finn dropping out of the Olympics after Tokyo 2020, it is anticipated that the Star and the SSL could become an attractive port of call for the world’s most talented bigger sailors who see their options for competing at the highest level steadily dwindling.