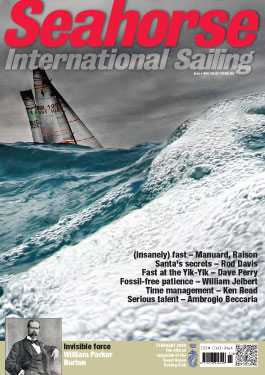 Keep it sane
Get it right and there is another way to keep your pre-owned TP52 plenty busy. ROB WEILAND

The revolutionary
No better way to describe DAVID RAISON who talks scows, foils… and obsolescence with FRED AUGENDRE

The greatest sailor you’ve never heard of – Part I
All that infrastructure and organisation didn’t get there by chance. CLARE MCCOMB looks at the life, times and extraordinarily far-reaching achievements of a little-known sailing influencer

Dave Perry: winning in life
Olympian CAROL CRONIN catches up with someone else who has done more than most to influence the sailing success – and enjoyment – of world champions and enthusiastic newbies alike

Giving back
GRANT SPANHAKE is one of the best-known faces on the grand prix circuits – now he has found a way to get all that experience out there for a wider audience. He talks to DOBBS DAVIS

Update
The black hole that is the 36th America’s Cup, the mule delivers value for money, a new force to be reckoned with in singlehanded ocean racing. Plus DON MCINTYRE’S latest round the world venture could do wonders for the brokerage market in raceboats. ROB KOTHE, GIULIANO LUZZATTO, AMBROGIO BECCARIA, TERRY HUTCHINSON, JACK GRIFFIN

Sailor of the Month
More gold medals than you can count