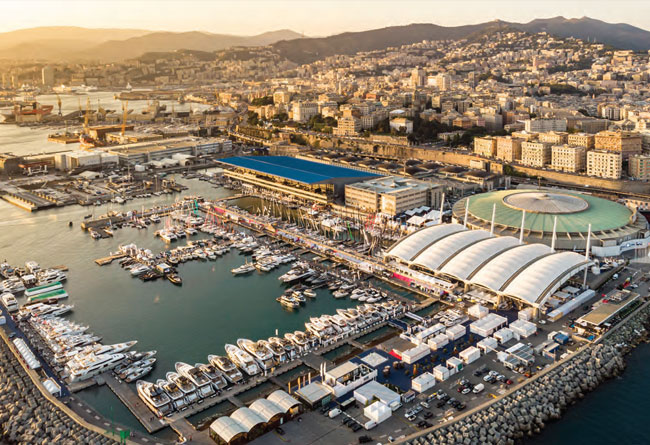 With one thousand boats and approaching 200,000 visitors, the Genoa Boat Show is now among the most important in the world…

Towards the end of the European boating season, the ancient sailing city of Genoa hosts one of the Mediterranean’s key in-water boat shows. Held every September, the Genoa International Boat Show, organised by Ucina, the Italian marine industry association, celebrates Italy’s love affair with the water.

Set in eastern end of Genoa’s well protected and busy commercial harbour, this six-day show is all about maximising the value of the “in water” concept. With the Mediterranean lapping on the other side of the harbour wall, the two marinas are filled with boats ready for sea trials. This, plus two floors of a large exhibition hall with a semi-covered external area allows Italy’s most prestigious marine exhibition to showcase the very best of the industry. The boats are grouped into types, accessed by wide walkways. Yachts, RIBs and runabouts cluster near the main hall, while catamarans (now a major growth area) are in the west part of the marina. Beyond them, motor yachts dominate the western end of the show.

During the show, the city of Genoa was announced as the finish port for the next Ocean Race in 2022 and two Open 60s were in town for the announcement, providing the star turn of sailing experiences.

With around 1,000 boats on show, just about every aspect of waterbased leisure was displayed for the 188,000 visitors last September, from which it is clear that that Italian yachting industry is in good shape.

The six-day Genoa International Boat Show is a rising star in the world of boat shows, hosting around 1,000 boats and attracting 188,000 visitors in 2019. Held in late September in the busy commercial harbour of this ancient and iconic maritime city, it showcases the very latest and best yachting innovations from Italy and beyond 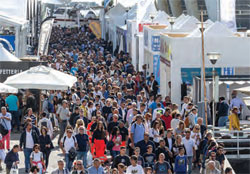 The main air-conditioned hall featured two floors with a mezzanine level between for corporate events. This year, there were 45 new ventures at the show and a total of 610 business meetings arranged. Around 150 trade delegates were invited by the Italian marine industry association UCINA, and many new launches took place for the international press. English – the language of business and the sea – was widely spoken by exhibitors, so finding the information you needed was never a challenge.

The equipment hall itself was cavernous, with boats and engines on the ground floor, and marine equipment and associated businesses above. Better still, both upper floors opened out onto vast balconies offering panoramic views to the horizon and a bird’s eye view of the floating exhibits below. Anyone who remembers the Earl’s Court boat show would feel slightly at home here.

Back outside, walking around the pontoons in bright sunshine and temperatures in the high 20s, the range of boats and gear was all encompassing. As you would expect, most major brands were represented: a virtual who’s who of leading names in boats, masts, sails, rigging, yachts and ancillaries. If you wanted to step aboard any of the boats, access was granted with a smile and a suggestion to remove your shoes.

Access to this show is made easy by the close proximity of the international airport just a 20-minute taxi ride away. For train-goers, the station is within walking distance, and for those who combined visiting the show with a European holiday, and were not afraid to challenge Genoa’s chaotic and scooter-rich traffic, there was plenty of parking nearby.

Visitor levels were up this year, increasing by eight per cent, with over 43,000 visitors attending on the first day. According to organisers, stand space sold out well in advance.

‘Genoa, the capital of yachting, has shown how attractive, welcoming and hospitable it can be,’ said Saverio Cecchi, president of Ucina. ‘We remain ambitious to do even better in the future.’ From what we have seen in 2019, the bar has been set pretty high.

Date for your diary:
The 60th Genoa International Boat Show will take place from 17 to 22 September 2020.