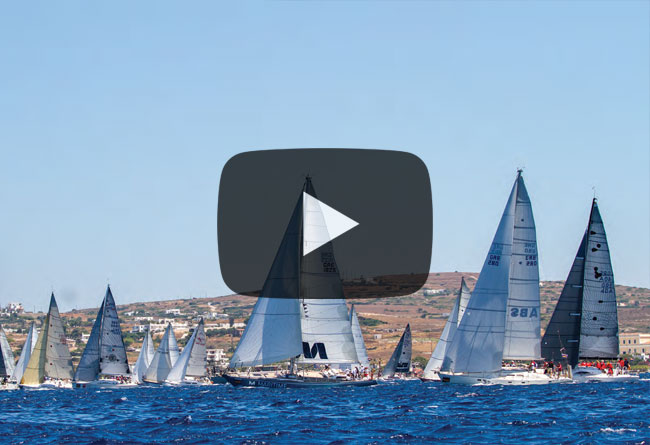 One of next season’s most enticing IRC/ORC events has to be this brand new, non-stop grand tour of the Aegean Sea...

Ocean racing has a small number of famous 600-mile races: the Sydney- Hobart, the Fastnet, the Newport- Bermuda, the Caribbean 600 and the Middle Sea Race. Now there is a new member in this exclusive group of special races, presented by the Hellenic Offshore Race Club (HORC), to be sailed from 14 to 20 June 2020: the Aegean 600.

This new offshore racing event presents a significant sailing challenge as well as a unique opportunity to sail non-stop in one of the most windy, versatile and beautiful sailing venues of the world. This will be a demanding route where boats will sail 200nm downwind, 200 upwind zig-zaging through the Dodecanese and a last, rewarding reaching leg to the finish line off Cape Sounion. Technical highlights of the race include among others sailing through the Santorini Caldera, 70nm in the Sea of Karpathos and Rhodes, passing through Kos strait as well as the five nautical mile Delos-Mykonos channel, where tough upwind work is expected.

It’s due to these deep roots of life on the sea that Greece has a rich maritime heritage in general and a robust sailboat racing culture in particular. As part of this, HORC has been organising races and regattas for nearly 60 years, including important offshore events such as the annual Aegean Rally and top-level international regattas such as the ¼, ½ and ¾-Ton World Championships in the 1980s, the 2006 TP52 MedCup Athens Trophy and the 2008 ORCi World Championship.

Main picture: After starting the race off Cape Sounion, about 20 miles south of Athens, the fleet will head to the southwestern islands in the Cyclades group before turning east at Milos. As well as being the southernmost island in the Cyclades chain Milos is also where the Venus de Milo was rediscovered by a farmer in 1820. Though not sadly its arms...

Registration and festivities for the Aegean 600 begin a week in advance on 7 June, with the opening of free berthing and a race village at Olympic Marine, a full-service marina facility in Lavrio that is only a 30-minute drive from the international airport in Athens. During this pre-race period tours of famous sites such as the Acropolis Museum, the Parthenon and the Temple of Poseidon are available as well as parties and receptions affiliated with the event. 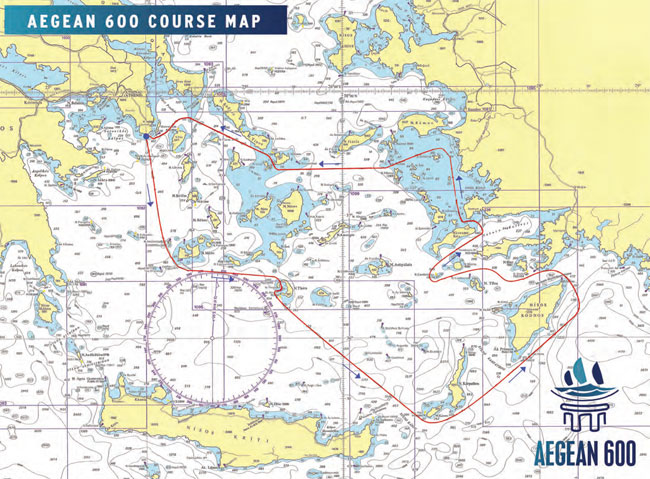 This is a race designed by sailors for sailors, and those who will take part in it will have the opportunity to compete on a famous and very interesting course starting on 14 June from Homer’s sanctuary, in front of the columns of Poseidon’s temple at Cape Sounion. With the wishes of this mythical god of the sea the fleet will encounter a wide variety of sailing conditions, starting first with their sail for Milos, the home of the Venus de Milo and the prize of the Louvre de Paris. Surrounded by Cycladic white, they will then reach the scenic Caldera of Santorini, where the white of the houses blends with the volcanic rock creating unique contrasts and images. 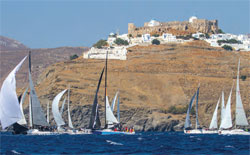 Above: the course of the Aegean 600 will give competitors spectacular views of many of the Aegean islands. This is Astypalaia in the Dodecanese. Note: the 2020 race will be the first edition so these pictures are from this yearʼs Aegean Rally which includes stopovers in many of the same islands. And crossing tacks around Antimilos Island (below)

Sailing on to the southernmost island of the Aegean Sea, Kassos, the fleet will leave Karpathos – the isle of Athena’s birth and the residence of Prometheus – to port before turning north towards the Palace of the Grand Master of the Knights in Rhodes. The course then continues north to the scenic island of Kos, home to the father of medicine Hippocrates, and Kalymnos, the island of sponge divers, while on the way they will see many beautiful small islands, each with its own history.

The fleet will next sail to the colourful islands of Pharmakonisi and Agathonisi, and will continue to Patmos, the island of St John and the Cave of the Apocalypse. Then sailors will cross the Icarian Sea, where legend says Icarus fell from the sky, and head to cosmopolitan Mykonos and Delos, the birthplace of Apollo and holy sanctuary for the ancient Greeks. The last islands of the route will be Giaros and Kea, and in the final leg the fleet will see the Temple of Poseidon which marks the end of this race and their sailing adventure.

Official charter yachts are available to race the Aegean 600 from two local suppliers: the X-Yachting Sailing Centre and fastsailing.gr, both based in Lavrio, near Athens. Registration is open and already there are 46 entries from 13 countries ready to take the challenge.