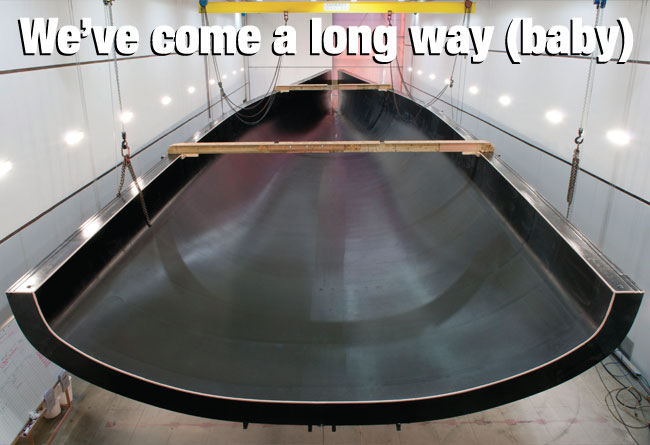 Looking down into Bay 1 at Green Marine last week, it was hard to take your eyes off the 33m carbon mould suspended from the roof beams. I don’t know whether it was the sheer size, or the symmetry of reflections side to side, or just the knowledge that we were looking at five tonnes of shiny carbon fibre.

All three probably – along with the feeling that the way we build yacht moulds had taken another step forwards.

The mould in question is the latest built at Green Marine: full-carbon/epoxy single skin laminated onto a one-piece CNC machined plug. Ten years ago we would have considered this to be exotic. Even five years ago it would have been extremely expensive. But the availability and speed of milling machines have increased at such a rate that today we are machining moulds and composite components on a weekly basis. In fact, there are two milling machines over 35m long within 20 miles of our factory door.

The use of milling machines is not the only revolution we have seen in mould manufacture. It was a bit of a surprise in 1994 when Bill Tripp told us that he was sending the lines for Shaman (an 88-footer) ‘this evening by CompuServe’. Until then we had lofted every boat full size from a table of offsets on a white painted ‘loft floor’. We still teach our apprentices how to loft a boat, even though the last time we lofted a yacht in anything like the traditional way was the Whitbread 60 Intrum Justitia in 1991.

Receiving Shaman’s lines attached to an email felt very 21st century – though it still left the boatbuilder quite a bit to do. The file gave cross-sections of the hull surface, but we cut mould frames offset from the hull surface by the thickness of the battens and plywood that form the surface of the mould.

This offset had to be measured at 90° to the hull skin: something that in 1994 only the most exotic shipbuilding software could calculate accurately. So we worked out the ‘deductions’ manually on full-sized Mylar printouts. The frame shapes were then transferred from Mylar to wood by laying dozens of nail heads on the Mylar and pressing plywood down onto the nails to make an indent. We’d then cut the wood frames on a bandsaw: port and starboard in one cut.

Within a few years the software had caught up and it was possible to cut accurate frames direct from a digital file; which meant that we could use CNC routers to cut the wooden mould frames directly from the digital file. The first boats we cut this way were the 1999 Prada America’s Cup boats Luna Rossa 1 and 2.

At that time all our moulds were made from wood; while all our boats were already being laminated in pre-preg carbon. However, the cure process for pre-preg makes a lot of demands on a wooden fabricated mould or a plug: typically we ‘cook’ a boat four times during the moulding process, raising the temperature from about 20°C to 90°C each time. As the mould and moulding heats and cools, it also expands and contracts.

Laminating pre-preg into the mould is not a problem; even raising the temperature by 70° is not a problem. It’s when the resin in the pre-preg is cured and the temperature starts to drop that things get exciting: the wooden mould contracts, but since the coefficient of thermal expansion for carbon is effectively zero, the carbon hull inside the mould wants to stay the samelength as it was at 90°C. You can get away with it when building small boats, but if you cook a 30m carbon hull inside a wooden mould the physics catches up with you.

At first we made extremely robust wooden moulds in an effort to resist the forces involved; but we learned that the more material we used the greater the expansion force, so we developed lightweight radial mould structures to keep distortion to a minimum. The best solution, however, is to make moulds from the same material as the mouldings, so that the two expand and contract together. Since carbon fibre is the best boatbuilding material yet discovered, this leads us to make our moulds from carbon fibre also.

All of which goes some way to explaining what we were thinking when looking down at the mould currently inhabiting Bay 1. Practically all our mould-plugs are now cut by CNC machine (above) directly from a surface file provided by the naval architect – in this case we laminated a 9mm thick carbon-epoxy mould over a full-sized CNC-milled pattern.

Mould making is just one example of new technology being applied to the age-old process of building custom boats; the result being greater accuracy, shorter overall build times… and less cost.