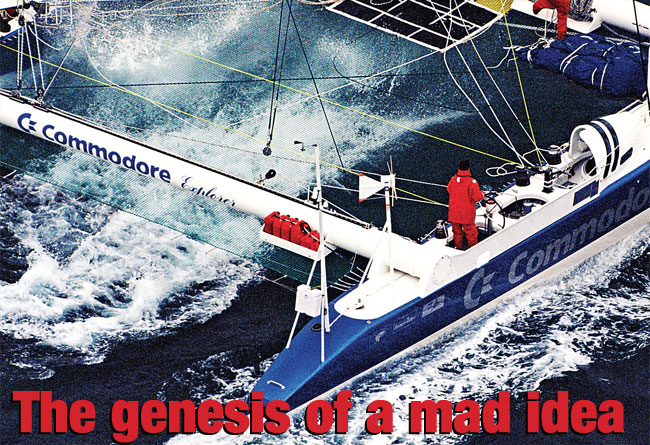 Crossing the Vendée Globe finish line after 78 days at sea last year, François Gabart became the first monohull sailor to circumnavigate the globe singlehanded in less than 80 days – it seems to have remained under the radar, but it turns out that the young prodigy had managed this feat precisely 20 years after Bruno Peyron’s improbable yet successful first Jules Verne campaign.

Between these two events, only two decades but a world of difference in terms of performance – so much that the link has obviously not been particularly striking to many observers, as if we were considering two unrelated eras. And, of course, we have indeed entered another dimension, an epoch during which it’s almost natural to hear Yann Guichard announce that he will race the next Route du Rhum aboard the 40m-long Spindrift trimaran… which incidentally happens to be the current Jules Verne holder, with a mind-blowing 45-day planetary lap.

Yes, all of that and much more – Joyon’s 57-day solo circumnavigation, Banque Populaire’s 3 days 15 hours Atlantic crossing, you name it – in just 20 little years. Some of us might remember hearing Jean-Marie Finot, before the start of The Race in 2000, predict, ‘We’ll see a boat sail around the globe in 40 days, that’s not as far away as we might think.’ What most of us thought at the time, Jean- Marie, was that you were pushing it a bit just to spice up the conversation. And how wrong we were…

But back then the reference time was 71 days, how futuristically insane did you think your prediction sounded to us, mere mortals, barely aware of what fabulous design and materials science prowess were on the horizon?