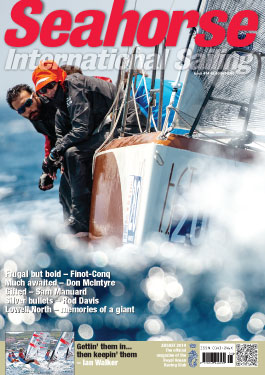 Intuitive... and eclectic
There is one new Imoca more eagerly awaited than any other. JOCELYN BLERIOT talks to France’s quietest yacht designer SAM MANUARD

Big picture
Since he retired from professional sailing 2014/15 Volvo Race winner IAN WALKER has been juggling several different areas of focus. Keep GBR at the top of the racing tree but, even more important, find ways to keep feeding – and nourishing – the grass roots of the sport

Big fish are (already) biting
DON MACINTYRE is not a man to sit idle. Only weeks after the last finisher in the Golden Globe crossed the line he already has a much ‘bigger’ feast to digest, as he explains to ROB KOTHE

Some makeover
Swiss Vendée Globe skipper ALAN ROURA has a plan. To execute it on time at the right price he turned to Finot-Conq’s DAVID DE PREMOREL

The power of three

ORC – Nice idea
For once the wind blew and the result was probably the best worlds yet. DOBBS DAVIS

52 Super Series – Relentless
This year’s favourite is so far living up to the billing. HARM MÜELLER-SPREER, TOBIAS KOHL, ANDI ROBERTSON

Sailor of the Month
A great coach… an extraordinary sailor