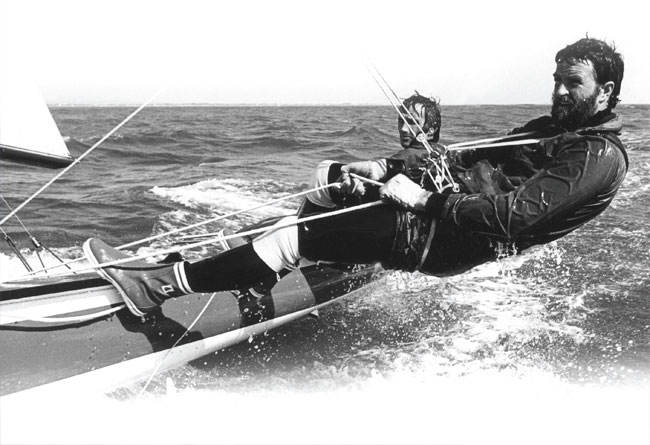 The basis for modern theories of competition success... but to achieve tiny but incremental gains successfully relies primarily upon reliable feedback from the coal face

The concept of “marginal gains’ has been well explored and explained in recent years, especially in relation to the success of the British Cycling Team both on the Olympic velodrome and in the Tour de France with the success of Team Sky. However, as Musto’s head of marketing Nick Houchin explains, the concept of marginal gains has been at the core of the company since its foundation.

‘When Keith Musto went to the Tokyo Games in 1964 and came home with a silver medal in the Flying Dutchman, he realised how small the margins were between winning gold and silver. It was that experience that led him to form the company and to create products that would always seek to eliminate those tiny weaknesses, to make clothing and equipment that would help enhance the performance of the athlete to the nth degree. It’s from Keith’s original philosophy that we coined our brand’s strapline: The Inside Edge.’

Musto’s marginal gains have come from working closely with the best sailors in the world, taking on the toughest challenges. Whatever is good enough for them is surely good enough for the average weekend enthusiast. Vendée Globe and Volvo Ocean Race veteran, Sam Davies, has been one of Musto’s ambassadors for many years. She very much holds to Keith Musto’s view that a sailor’s clothing is every bit as important as the boat and equipment powering them through the water. While corporate requirements have obliged Davies to wear many marine brands over the course of her professional career, whenever she has the luxury of personal preference, she always comes back to Musto.

Main picture: Keith Musto and Peter Sweetman racing their unusual Bob Hoare/ Westerly built Flying Dutchman Lady Killer during the 1972 Olympic trials (they were only beaten right at the end of the final race by Rodney Pattisson, who went on to dominate the Munich Olympics). Keith Musto’s concept of marginal gains is still the fundamental philosophy of the company he founded and it still delivers winning results

Houchin admits he was a little surprised when Davies got in touch a few months ago to report that she’d worn through the knees on her trusty HPX salopettes. ‘We weren’t expecting that,’ he says, ‘but the explanation was pretty straightforward. Now that the new generation of Imoca 60s are riding on foils, speeds have gone up exponentially, and so has the bumpy ride. It’s almost impossible to stand up and walk around without hurting yourself, so Sam has been spending a lot of time scrabbling around the boat on her hands and knees. That’s a useful piece of feedback for us to take back into the next design cycle for our HPX offshore range.’

There are three big races coming up for Musto to use as its next R&D platform: The Vendée Globe, The Ocean Race (formerly the Volvo Ocean Race) and The Clipper Race. ‘We work closely with those races because they are the toughest,’ says Houchin. ‘They place the biggest demand on the equipment, including clothing. Each race places a different emphasis on the kit and poses distinct challenges for us to address. In a long, solo circumnavigation with no stops, like the Vendée, these sailors live in their HPX trousers day in and day out, both on deck and down below. Whereas in the Ocean Race it’s a team of sailors spending a lot of time on deck, very exposed, in the “fire hydrant” for hours at a time. Then in the Clipper Race, they might not be travelling at the same kind of high speeds, and the water might not be hitting them with the same force, but the sailors are still exposed, and they need to be kept dry and warm for weeks at a time. We’re talking about three very distinct types of race, and monitoring the feedback from the sailors gives us a much broader overview of how our kit is used and what we need to do if we’re to keep on improving it.’

The Clipper Race is a new venture for Musto, which is the official supplier for the next edition starting later this year. Musto’s head of products, Chris Holliman, comments: ‘We're very proud to be involved in the Clipper Race because it’s got such a special place in our sport. The sailors are not professionals, they’re ordinary, everyday people taking on an extraordinary challenge, giving up their day jobs to go and achieve something remarkable.’

Because Clipper Race sailors are not steeped in the sport, Holliman says there is an education process involved, to guide them through the “three layer” process that is at the core of Musto’s offshore range. ‘We help educate them on the pieces of kit that they need to wear on certain legs and essentially how it all works together as a system. In the tropics for example, they need to make sure that they're well protected from the sun. Simple things like making sure they've got a wide-brimmed hat and a long-sleeve T-shirt with UV Factor 50. For the Southern Ocean they need to make sure that they've got the base layer, the mid layer and the outer layer. You need something that’s comfortable against the skin and we recommend a Merino base layer, which is soft, it wicks away moisture and is odour-free, as well as having great thermal properties.

‘Then we recommend a fleece midlayer and salopettes to make sure that the core is kept warm. When they put the Gore-Tex HPX waterproofs on, it means that when they go through those high levels of activity, with manoeuvres, pulling sails up and down, tacks, gybes and so on, the whole system allows the body to breathe. The moisture is transferred away from their skin, through the breathable outer layer, which means that their base layer doesn’t get wet with perspiration. So the sailor stays dry and warm.’

Clipper Race sailors are issued with a standard amount of Musto kit as part of their race package, but they’re still going to need to buy some of the gear for themselves, which is why the education in the system is important. What might look or feel good in the store might not deliver what you need out in the midst of a Southern Ocean gale. The importance of Gore-Tex is a case in point. Only when you’ve started shivering from your own sweat drenching you and then cooling you down when you’re trying to stay warm, do you really fully appreciate the best breathable gear in the business.

At the other end of the scale from the everyday heroes in the Clipper are the big-name pros in search of every tiny advantage. Winner of the last Vendée Globe, Armel Le Cleac’h, suffered that major setback last winter in the Route du Rhum when his Ultime maxi trimaran capsized and had to be abandoned. However, even these setbacks help inform Musto about what’s important in an unforeseen emergency. Le Cleac’h’s sponsor, Banque Populaire, has committed to continuing its long association with offshore adventure sailing, and Musto looks forward to supporting one of France’s most talented sailors whenever his replacement Ultime is launched. 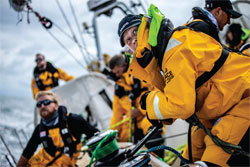 Above: the “ordinary heroes” of the Clipper Race have now become a crucial element of Musto’s R&D alongside top professional sailors like Sam Davies (below) and Armel Le Cléac’h. Sailors in the Vendée Globe, The Ocean Race, the Clipper Race and the America’s Cup will all provide vital feedback to help improve the next generation of Musto’s technical clothing 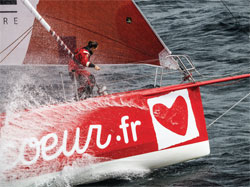 Another high-profile star of the offshore scene, and also a Musto ambassador, is Jérémie Beyou whose Imoca 60 Charal has delivered the most breathtaking performance yet. Again, like Le Cleac’h, Beyou failed to complete the Route du Rhum, although for him it was a retirement from breakage rather than a capsize. It’s not altogether surprising either, when you see the videos of Charal flying above the waves, a 60ft keelboat defying gravity with some of the most advanced hydrofoils yet produced. There are bound to be teething problems at the cutting edge of development.

Perhaps all this high-speed foiling is so outlandish as to be almost irrelevant to the average weekend racer though? Holliman, a keen dinghy and keelboat racer himself, doesn’t believe so. ‘We can see that boats are changing in the market, and pretty quickly. Nick and I have done a reasonable amount of sailing; just a few years ago you’d be sailing around the Solent pushing water, not going very quickly, now you’re doing 25 knots. That changes the demands quite considerably, especially when you go offshore. So yes, I think what we’re doing at the elite end of the sport feeds back very directly into the wider sailing market.’

As for Sam Davies’ worn-through knees, Musto is now working in close partnership with D3O, billed as the “Gore-Tex of impact protection”. With an enviable track record for providing impact protection in the military, heavy industry and a number of contact sports, D3O started working with Musto more than two years ago on Franck Cammas’ Groupama campaign for the 2017 America’s Cup. Musto learned a lot about how to incorporate protection into sailing gear, and has continued to do so with its Foiling range of clothing for dinghy sailors. Musto’s close partnership with the British Sailing Team is keeping the company at the forefront of developments here, particularly with experience from the Nacra 17 foiling catamaran where the risk of impact and injury is high.

The lessons learned from the last America’s Cup and the British Sailing Team are already being applied to the gear being developed by Musto in its role as exclusive official technical sailing apparel sponsor of Stars + Stripes, challenger for the 36th America’s Cup presented by Prada. Those same lessons will also carry across to the increasingly bumpy world of high-speed offshore sailing. Whatever new challenges arise, Musto continues to work hard to maintain its status as the clothing of choice for sailors who want to race without compromise. More than half a century later, Keith Musto’s “marginal gains” philosophy endures.