A game of contrasts 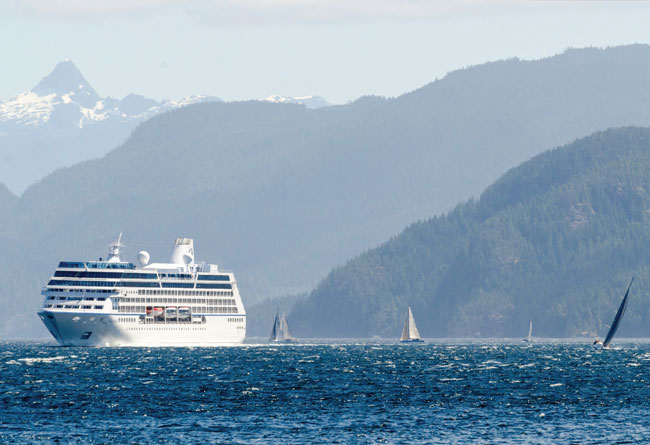 The great oceans of this planet invite us to sail great ocean races, with most having long and storied histories. In the Atlantic these include the Transatlantic, the Newport- Bermuda, the Route du Rhum and the Cape Town-Rio Race, among others. In the Pacific there are several, including the Transpac, Pacific Cup, the LA-Tahiti Race and various races to Mexico. Most of these are biennial and start or end in the southern half of North America. Yet there two other great offshore races in the Pacific that start (and one ends) in the northern half of this continent: the Vic-Maui Race and the Van Isle 360.

These are two very different races yet they both celebrate a rich heritage of Canadian yachting in the beautiful Pacific Northwest. The Van Isle 360 is the younger of the two, in its 20th year this year, and has a fascinating format that is driving its growing popularity. Rather than being a point-to-point ocean race, this race is actually a tour and has its roots in a clever idea developed in 1986 among some adventure-seeking multihull sailors who planned to race around Vancouver Island in eight legs. That event had a title sponsor, an entry fee of $1,000 and encouragement for teams to find sponsors to support them on this odyssey. The problem was that Corinthian attitudes prevalent in the hierarchies of the sport in this era were not yet ready to support sponsored sailing, so the event died despite having a respectable count of 25 entries.

Scroll forward to the more enlightened ‘90s and the event was reorganised, this time as the “Coast Hotels Around the Island Race” to test the viability of the concept and the racecourse. The 1999 Van Isle 360° International Yacht Race featured 14 entries and even with this modest start, proved the concept was a success. The race ran for three more years consecutively, growing in entries, media attention and supporters. After the race in 2001, organisers decided to revert to a biennial format, running on odd years to alternate with the transpacific Vic-Maui Race on even years. This helped bring the event to the attention of an interested crowd of boats from south of the border.

Main picture: The Pacific Northwest is an amazing place to sail and thereʼs no better way to enjoy this land of epic extremes than to enter the Van Isle 360. A classic race around Vancouver Island, the Van Isle takes you north through the sheltered but tactically tricky Inside Passage, then out into the Pacific for a roller-coaster ride south to Victoria

The race boomed in size and popularity over the next few editions, hitting its limit of entries as early as January, but the lousy economy of 2008 weakened the entry count in 2009. Fortunately, 2011 brought new features such as race trackers and entries were back up in the 40s. The race in 2013 was popular, but a drifter, which naturally resulted in the 2015 race being a blast, literally, with four days of gale force winds in the Johnstone Strait that did not abate. The effect was to add another lay day to the schedule so that repairs could be made if this happened again, and if not, another day to enjoy the beauty of this remote area. A lay day added to the Port Hardy stopover allowed skippers to change out “inside crews” for “outside crews” in anticipation of the open ocean sleigh ride on the outside of Vancouver Island.

For some the format of the Van Isle 360 may resemble the Tour de Voiles in France (minus the inshore port racing), where the logistical challenge of getting the support team and their vehicle to the next port could be more difficult than pushing the raceboat up the course. Except in a few areas, the coast of Vancouver Island hardly resembles the French coast: the Winter Harbor stop on the northwest coast is so remote and rugged (and the fishing incredible) that the only road access is on axle-breaking logging roads, so at some stops the race crews have to bring what they need for overnight stays.

At some of stopovers in these remote areas there is also little connection with mainstream modern life and in some villages the indigenous First Nations people offer hospitality and examples of their way of life, based on fishing the abundant salmon and halibut in the area. Their distinctive artwork such as totem poles and other important symbols of their culture are found throughout the region.

The racing can be incredibly diverse. You need self-sufficiency and every tool in the bag to succeed in this race since conditions can range from light and drifting in flat water on the eastern protected coast of the Straits of Georgia, to booming with big wind at Cape Scott at the northern end of the island, strong current in the Johnstone Strait and racing downwind in large Pacific swells in the longest leg of the race from Winter Harbor to Ucluelet, and Ucluelet to Victoria. It was not until 2013 that four boats were the first in the history of the race to complete and get a score for all nine legs of the course.

Even though the water temperatures here are hardly tropical, the wildlife and scenery in this area is stunning: besides the salmon and halibut fish harvesting to enrich the local cuisine (one stopover has the fleet moored at the Mowi salmon aqua-farming operation), the other animals that fly, float or flit along the shorelines are like no other yachting venue in the world. Where else will you see pods of orcas, humpback whales, sperm whales, eagles, bears, otters and mink on a racecourse? And with snow-covered peaks in the distance?

As for entries, this year’s Van Isle 360 is again sold out for both cruiser-racers and cruisers, with the racers ranging in size and speed from four multi-generation TP52s down to a GP26, although Mike Scoendorf’s ultra-fast Biekerdesigned Riptide 41 may very well put the Seattle-based TPs to the test for line honours on some legs.

Below: it can be a drifter... or you might meet a gale while sailing through the Johnstone Strait. After short tacking up the narrow channels on the sheltered east side of Vancouver Island, many teams use the Port Hardy stopover at the north end of the island to swap their ʻinside crewʼ for a stronger ʻoutside crewʼ in anticipation of the open-ocean sleigh ride that often ensues during the second half of the race. Crews must be totally self sufficient in the remoter parts of the racecourse, but thatʼs a large part of the appeal. 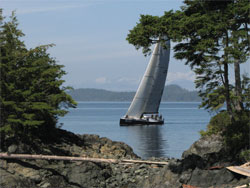 Organiser Jeff Motley and his wife Sylvia live near Nanaimo and plan this race year-round, hashing out all the race management details, logistical complexities and local politics with their committee to produce an experience that is fun and as stress-free as possible for all concerned. The nearly 40 entries they have this year attest to the confidence others have in their hard work, and they invite others from around the world to come and spend May and June in what can only be described as God’s Country.

For those who want to sail a true oceanic race that represents a classic of Pacific Northwest yachting, the biennial Victoria to Maui International Yacht Race is the perfect choice. In this race the first leg out to the Swiftsure Bank though the Strait of San Juan de Fuca gives a final tour of the cool climes of the Pacific coast, followed by a track that heads south and west to stay on the east (downwind) side of the Pacific High in the favourable but cool water of the coastal currents offshore of Washington, Oregon and California, before heading more westerly into warmer water and winds, clearer skies and the final downwind leg of the race to Maui.

Hosted by the Royal Vancouver Yacht Club and the Lahaina Yacht Club, this race from one paradise to another was first contested in 1965 and has been sailed every second year since 1968. It starts in July off the provincial capital city of Victoria, British Columbia and finishes near Lahaina, another picturesque town built by whalers in the earliest days of western settlement in the Hawaiian Islands. The race distance is approximately 2,308 nautical miles, longer than any other race from the West Coast to Hawaii.

With its multiple segments and northeasterly approach to the Pacific High, Vic-Maui challenges navigators to demonstrate their weather routing and navigational skills. Success depends on the navigation team’s skills in predicting where the Pacific High and trade winds will be – and to do this nearly a week into the future before the start. Having the right game plan is often decided in the early phases of this race. In years with El Niño and other non-typical patterns, this can be a daunting challenge indeed.

Besides beating out from the start in what can be a pleasant sunny sea breeze or light air and fog, the allure of this race is when progress is made reaching away from the cold and around the Pacific High to get to the surfing downwind conditions in the trades. The days pass quickly with the fleet surrounded by dolphins and albatross, spectacular sunrises, sunsets and brilliant starlit nights.

Teamwork gets the boats to the finish line near Lahaina, where each arriving boat is greeted with an outstanding Hawaiian welcoming party. Family and friends meet the racers to help celebrate their accomplishment with hugs, leis and mai-tais. Many crew stay to spend more time enjoying Maui with their families before heading home.

There is no one who has regretted adding these two great races to their “bucket list” of events and the locals from British Columbia and Seattle swear by them – come and see what keeps drawing them back.

Click here for more information on the Van Isle 360 »

Click here for more information on the Vic-Maui Race »