Everything in its (right) place 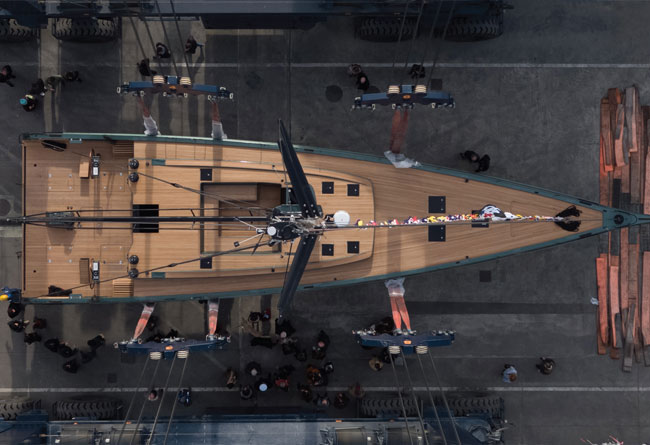 Best known for the elegant and well-engineered equipment that is used on many of the world’s fastest raceboats, UBI Maior’s technology is also increasingly seen aboard the most stylish and innovative cruiser-racers

When the builders at Vismara were approached to use their well-honed skills in crafting a beautiful new luxury performance yacht designed by Axel De Beaufort/Guillame Verdier, they needed to be assured their suppliers to the project met their own high standards. They chose UBI Maior as the supplier for most components of the deck hardware and sail-handling systems.

The vision for this new 69-footer called Nacira 69 was one not yet attempted in this genre: take the best elements of the Imoca 60 class yachts and adapt them for shorthanded luxury racing and cruising. Built in pre-preg carbon with a deck-stepped mast placed well aft towards the longitudinal centre of the yacht, Nacira has a more open interior for cruising along with the very latest in offshore performance design from the creators of many Imoca 60s as well as larger ocean greyhounds such as Comanche.

As with the Imocas and Comanche, strength and light weight would be of paramount importance for all the hardware in order to meet very high utility and performance targets, which are impressive given the complex systems found on this boat. For example, the retractable canting keel with a draught range of 2.50 to 4.50 metres extends the cruising range, but also makes for some very highload sailing scenarios where it is imperative to have the line handling systems operate not only reliably but with as little friction as possible. This is crucial for a boat this size that will at times be sailed doublehanded.

Main picture: The new De Beaufort and Verdier designed Nacira 69 employs some of the best elements of Imoca design, being adapted and optimised for two-handed racing and cruising. The hardware used aboard this cutting edge yacht had to meet very high utility and performance targets. Much of the gear is bespoke, designed and fabricated to order by UBI Maior. Many of the more complex parts were made using a 3D printer to save on time and materials

Given these strict requirements Vismara chose UBI Maior for several reasons: UBI’s growing reputation and track record in innovation in design and use of materials, the lowfriction functionality of their parts, their light weight where it counts and absolute strength where it is needed. Adaptability and compatibility with the other systems onboard was also important, so on a glamour project like Nacira 69, this was a perfect match.

Starting at the bow, the brand new UBI Maior 280 headsail furling system on the headstay is a perfect example. This system started life as a big brother to the proven UBI Maior 250 furling system but needed some customised features to achieve the flawless performance needed on this massive doublehanded yacht. Think for a moment about the reliability needed for a system like this: doublehanding such a large yacht requires absolute reliability in the sail handling systems because troubleshooting problems with only two people could be extremely difficult if not dangerous.

On a boat of this size with headstay breaking loads estimated to be up to 60 tons, the mandate for frictionless performance in the J2 furler system is high indeed. So engineers like Matthieu Delaporte at UBI start with the design of the smaller, but well-proven 250 and examine how to improve on this to accommodate the higher loads.

‘We started with a design process that is almost unlimited in fabrication constraints due to our experience in use of 3D-printing,’ said Delaporte. ‘For example, the line handler drum (the carter) is made in tough, strong ABS plastic, but needs additional reinforcement where the line enters the drum, so this and some other parts in the furler are machined from 6082 aluminium alloy and anodised.

The use of two different materials in the design can make for a complex part to build, but the 3D-printer is ideal to make this accurate to our design, and as strong and light as possible.’

Given that much of its work is on finding custom solutions, UBI Maior has been a pioneer in the use of 3D-printing to fabricate complex parts, and has realised that the efficiencies in time and materials are worth it compared with conventional machining techniques. Parts can be made accurately and quickly, ideal for this business of bespoke hardware when often there is no part on a shelf ready to deploy when the need arises.

Besides the new 280 being used for the large J1 headsail, there are UBI Maior 250 furlers used for the J2 and the J3 headsails, and a topdown 250 furler for the Code 0 which is tacked to the end of the bowsprit. And more top-down UBI Maior 200-series furlers are used for the A2 and A3 gennakers in the inventory. Just like the headsail furlers, these gennaker furlers must operate reliably and work well in the context of double-handed sailing.

Working closely with Vismara in the build phase of the project, UBI Maior found solutions at more than two dozen locations on the suitable hardware needed, not only to handle lines under load, but to also route many of these under deck to give the yacht that stylish clean deck look. There are numerous examples of this innovation aboard Nacira 69, with both custom and production solutions put to use in a clever deck layout that has been also optimised for short-handed sailing. The criteria used in the selections were not only strength for weight, but also durability, versatility and clever design that would minimise friction and chafe wherever possible. 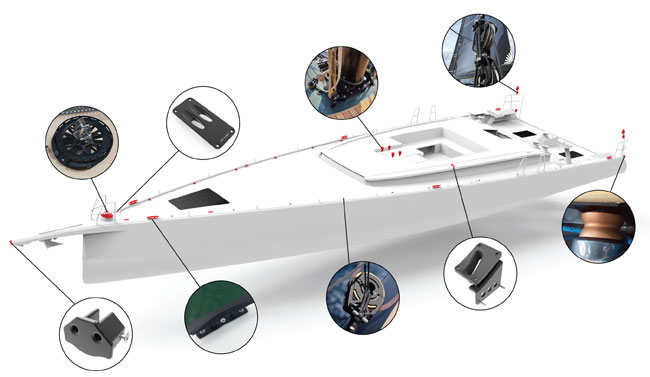 To route many of these lines under deck required careful planning of the angles and bury depths so that lines entered and exited their tubes with minimal chafe and friction, assisted by custom blocks installed to handle the turns. Special through-deck plates and line guides were also designed and fabricated to handle these lines, as well as the halyard block mounts at the mast partners. UBI Maior also fashioned the clever retractable bow cleats that fit the aesthetic yet functional profile of the boat.

It was here, with the hardware placement, that the team at UBI Maior had to work in close cooperation with Vismara to ensure the layout was perfect during deck construction and there were no delays in the build process, which took about one year: from January 2018 to January 2019.

‘Nacira 69 has been a particularly challenging project due to the owner’s requirements to have a very complete and versatile boat,’ said Laura Cappelletti of Vismara. ‘The guys at UBI Maior have been really great, helping us going through the different challenges. They supported us all along the way, from the conception to the installation and after-sales service.

‘They have been particularly valuable in anticipating the different issues regarding the hardware and coming up with new and innovative solutions every time. There has been a great collaboration between all the different parties on this project and the team at UBI Maior has been able to take into consideration not only our requirements but also the ones of our other suppliers involved.’

Vismara have been so pleased in working with UBI Maior on this project that they want to try this relationship again on a new Vismara 68 project coming soon.