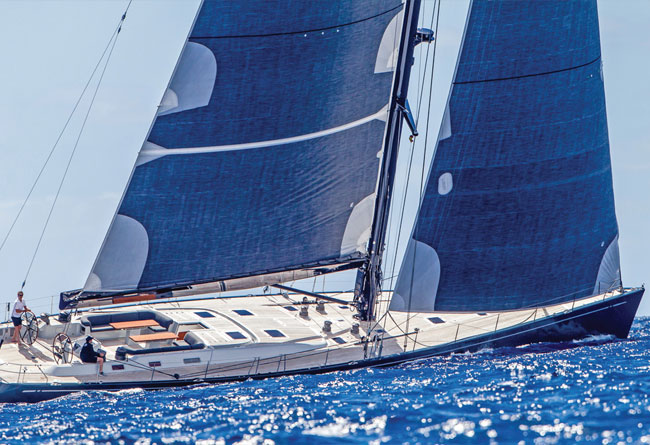 In the last decade Evolution Sails has grown from a small go-it-alone loft in New Zealand to an internationallyrecognised brand with an expanding network of franchise lofts in major markets, a proprietary membrane plant supplying an extensive list of independent lofts and a healthy stronghold in its target market.

‘Evolution Sails has been recording annual growth between 20-30 per cent. We have lofts in New Zealand, Australia, the US, Italy, Norway, Spain and Canada and we are continuing discussions about more franchises coming on board. We frequently have new groups coming to see what we are doing with a view to signing up.’

When one considers that 2009 was the height of the fallout from the global financial crisis, it was a brave move to strike out alone with a new sailmaking operation. Evolution Sails began in a modest 600m2 factory, but with a bold vision.

It would not compete in the lower reaches of the market, concentrating instead on high-performance sails particularly targeted at the large yacht market, using premium materials, manufacturing systems and people.

As an example of his recruiting standard, Keenan recalls talking to a senior executive at Dimension Polyant, the biggest manufacturer of sailcloth in the world. ‘I asked him who he considered to be the world’s leading laminate engineer. Six weeks later, he was working at Evolution Sails as our technical director.’

Main picture: The Swan 100FD Hoppetosse with a rather handsome suit of sails by Evolution. From the outset, this New Zealand based loft focused on producing high-tech sails for large yachts and quickly made a fine name for itself in the high performance superyacht sector.
Below: the Evolution HQ in Auckland has grown into a large manufacturing operation with an expert staff of more than 30, most of whom are accomplished racing sailors

Now in much larger premises, the New Zealand operation has grown to more than 30 people including highly qualified aerodynamicists, dynamic flow experts, designers and engineers. From Keenan down, most of the staff are passionate and accomplished sailors. The latest signing is Josh “Boo-Boo” Tucker who, at the time of writing, was competing in the gruelling Two-handed Round New Zealand Race, testing new Evolution concepts in the process.

A subsidiary company, EM2, manufactures composite membrane for its own products, but also supplies independent brands around the world. This was established in New Zealand in 2016 and uses a custom plotting machine laying carbon and twaron fibres onto a base laminate. A top laminate is then laid and put under a powerful vacuum and post cured electronically in a temperature-controlled environment.

‘That plant is often working 24/7,’ says Keenan. ‘Last year, we produced about 20,000m2 of membrane to order. Our manufacturing process takes a bit longer and is slightly more expensive, but our philosophy is to do it once and do it right. The extra cost of construction is saved by avoiding warranty claims and delivers a superior product to the customer.

‘From the outset, I took a view that we would not compromise on quality throughout our operation. We had one shot at getting this right and could not afford mistakes. Sailmaking is a very capital-intensive business and for us to get enmeshed in a lot of warranty issues would have been disastrous. That approach has paid off.’

In its first year, the brand launched itself in the best possible way with a string of high-profile racing victories. ‘We had wins in the Trans-Atlantic Race, the Middle Sea Race, the Big Boat Series and the US IRC nationals. We won six or seven Rolex events in the first year, which was phenomenal considering we had only about 0.3 per cent of the market at that stage.’

Racing success gave a platform for growth into the upper reaches of the superyacht scene and the Evolution logo has appeared on more than 60 yachts over 100ft, either with individual sails or full wardrobes.

Acknowledging that the very large yacht market is dominated by rival brands, Evolution has found a healthy niche in the 60-100ft range. ‘This is an area where there is a big emphasis on performance cruising, particularly with companies like Swan, Southern Wind, Baltic and Wally.

‘Also, in the production yacht arena, some of their boats are getting bigger and there are a number of owners who want better, more performance-oriented sails.’

Looking to the future, Keenan says ongoing research and development has led them to an exciting new material, which he says has the potential to take durability to the next level. ‘We are in the middle of solerights negotiations as we speak.’

This is part of a drive to improve the sustainability aspect of sailmaking. Keenan believes that in terms of wastage, use of plastics and other products, the sailmaking process needs to do better. ‘Shipping 20,000m2 of membrane means 40,000m2 of backing, which gets discarded,’ he says as an example.

‘It’s cool to be working towards technological solutions that will enable us to build it light and build it to last. Increasingly, we are seeing boat owners at all levels of the sport looking to be more responsible in this regard.’