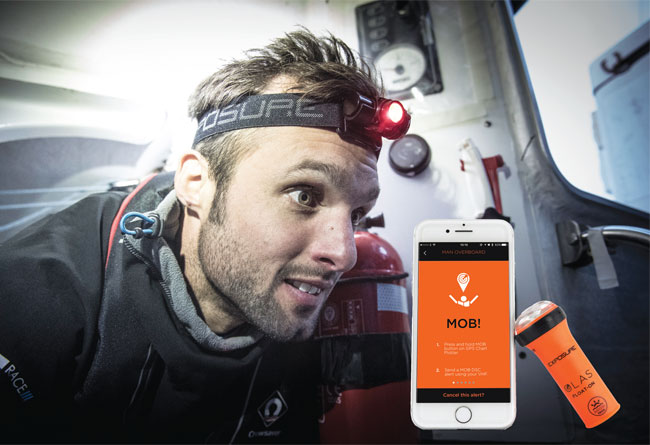 It all started with a simple yet remarkable torch, cleverly designed and purpose-built to solve one of the most intractable problems in offshore sailing. When someone falls overboard at night, the chances of getting that person safely back aboard can be frighteningly low. Rough weather, cold water, doubledigit boatspeeds, spinnakers, lack of practice, panic and many other factors make it even more of a challenge. That said, technology can dramatically improve those odds. Exposure Light’s MOB light, which won a DAME Design Award for lifesaving and safety in 2014, was arguably the most significant advancement in man overboard technology since the introduction of affordable, easily portable personal locator beacons. Over the past five years that first innovation has evolved into a full man overboard rescue solution, with further developments now on the horizon.

The best ideas often seem simple and obvious in hindsight. Most sailors were either relying on low-powered lights built into their lifejackets or using cheap, unreliable throwaway torches that weren’t designed for marine use. Exposure Light’s groundbreaking innovation was to put its powerful, market-leading LED lighting technology into a tiny, robust and reliable waterproof rescue torch that floats, with an immensely powerful searchlight beam and strobe. It switches itself on automatically after a few seconds of immersion, creating a pool of light in the water and its 1,300-lumen strobe can be seen five miles away.

Versatility is another key to the MOB light’s success. It’s easily fitted to a lifejacket for use as a beacon and signalling torch by a person in the water, but it also works like a danbuoy. The quick-grab holster can be stuck to almost any surface within arm’s reach of the helm and as soon as someone goes overboard the helmsman can simply throw it into the water to mark the casualty’s position. The lights have been thoroughly roadtested; every boat in the 2017-18 Volvo Ocean Race had MOB lights on board for this purpose.

The MOB light was enthusiastically adopted by a wide range of sailors, from amateur cruisers and club racers to professional ocean racing teams. In addition to its primary function as a rescue tool, it has proved very useful for sail trimming and other routine night watch tasks, giving users a strong incentive to carry it and keep it charged. Rather than relying on external batteries or restrictive cables, it plugs straight into the boat’s electrics (or any portable powerpack) to recharge with a standard USB cord. The latest version, MOB Carbon, is even lighter, stronger and submersible to six metres – ideal for inspecting keel bulbs and clearing fouled propellers.

What makes Exposure marine lights unique is that the whole product range is designed, precisionengineered and built specifically for sailing. They’re optimised for safety and rescue use, but also designed to be invaluable for routine night watch tasks on board. They’ve now become a must-have personal carry for many top professional sailors – including the entire fleet in the last Volvo Ocean Race 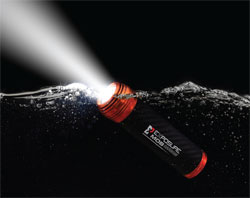 Invaluable though it is, the MOB light is only half of the complete solution, so Exposure Lights have developed OLAS (Overboard Location Alert System), combining Bluetooth wrist tags with a man overboardtracking smartphone app. OLAS creates a “virtual tether” between users’ wrist tags and a mobile device, triggering an alarm when someone falls overboard and helping the remaining crew on board to navigate back to them.

The next step for Exposure Lights’ design team was to integrate their two marine rescue products into a single solution. The result is OLAS Float-On, a rescue torch that combines the full functionality of both systems. A miniature version of the MOB light, it’s designed to ensure that it always floats beam-up and engineered to maximise the connectivity and stability of Bluetooth signals between itself and the OLAS app on the onboard mobile phone or tablet. A “snap-on” USB fast charger completes the package.

Another simple device with huge safety benefits for sailors is the humble head torch. It’s a no-brainer for working on the foredeck at night: one hand for you, one hand for the boat and no hands (or teeth) needed to carry a torch. As with rescue torches, however, there wasn’t a product designed specifically for sailing until Exposure Lights’ RAW Pro came along.

Developed and sea-trialled with input from Dee Caffari, Ian Walker, Team Concise and Alex Thompson, RAW Pro is engineered to withstand the rigours of a headsail change in mid-ocean, when foredeck crew can be plunged under water at high speed as they work on the bow in heavy weather. Unlike most head torches, the default setting when you switch it on is a 50-lumen red beam, powerful enough but designed to preserve your night vision.

A new phase in the evolution of Exposure’s marine safety range is now under way, with product launches planned for the start of the new sailing season. Next up is a lowpower, hard-wired central hub that communicates with the OLAS tags in rescue torches and wristbands, eliminating the weakest link in the system’s resilience – the crew’s mobile phones. Third-party gateways will allow OLAS to integrate with other onboard electronics via NMEA-2000 and enable large yachts to build a networked man overboard alert and rescue system. Watch this space.