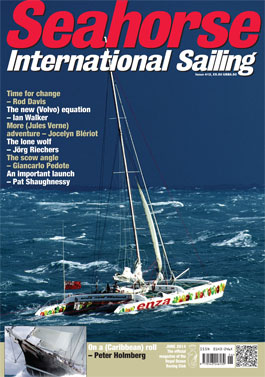 Honey, they shrunk the planet
JOCELYN BLERIOT brings us up to date with the Trophée Jules Verne

Enigma
They certainly look the part, but why are so many of today’s raciest-looking production boats so heavy? ØYVIND BORDAL, NIELS JEPPESEN and TOM HUMPHREYS

World news
And the next Vendée Globe is rolling already, as is the Transat AG2R and the HALVARDMIRANDA show. Plus Maxi cut-and-shut in Auckland, getting off the line with JIMMY SPITHILL and TOM SLINGSBY and a smooth transition in St Thomas. BLUE ROBINSON, IVOR WILKINS, PATRICE CARPENTIER, DOBBS DAVIS

Seahorse build table – Sharpening up
When does a Farr 400 OD become a Farr 440?