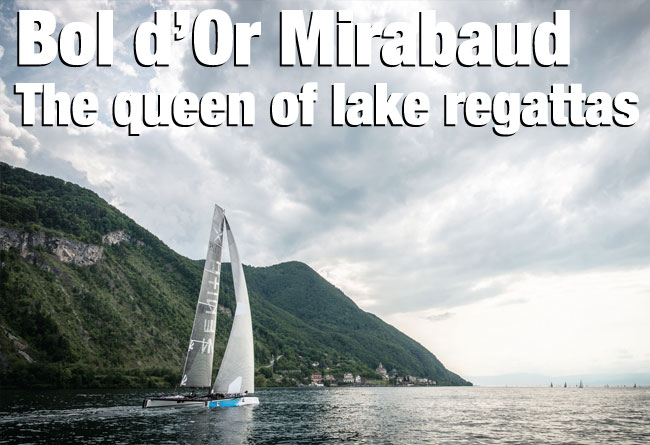 Founded in 1939, the Bol d’Or Mirabaud is not only the largest lake regatta in the world, but one of the oldest regattas in Europe. In its 75 years the event has inspired passion unlike any other, kept pace with technological innovation and the entrepreneurial spirit of its competitors, and attracted champions from all over the world.

For some it is about the racing, for others, namely the hundreds of crewmembers that compete each year, the Bol d’Or Mirabaud is a celebration. Cutting-edge technology, international champions and the latest materials, or barbecue and adventure – the experience and spectacle are superb for everyone involved.

Mirabaud & Cie private bank has been the title sponsor of the Bol d’Or Mirabaud since 2006. CEO Antonio Palma sees the event as an exceptional opportunity for amateur sailors to race alongside professionals of the highest level. Each year bank employees race the Bol d’Or Mirabaud and enjoy 24 hours of sport and friendship with staff travelling from as far as their Spanish branch to take part alongside celebrities such as Francesco De Angelis and Luis Doreste, who competed in the Mirabaud Surprise Class and won last year’s ‘Celebrity Race’. For Antonio Palma – a regular on the 7.5m Surprise, winner of the 75th edition – the best moment is the start of the event, when he is just metres away from some of the biggest international champions in the sport. ‘It’s a bit like lining up against Fernando Alonso at a Formula 1 Grand Prix race. It’s only possible in sailing!’

Mirabaud has been involved in sailing sponsorship for many years, giving passionate sailors from all walks of life the opportunity to achieve their goals. In addition to being involved in the Bol d’Or, Mirabaud is main partner of Spindrift Racing, a pioneer in its quest for some of the world’s most prestigious records. The bank also supports the international photography competition Mirabaud Yacht Racing Image that is dedicated to selecting and honouring the most beautiful sailing shots of the year. For four years Mirabaud partnered Swiss sailor Dominique Wavre who raced ultimate offshore events, the Vendée Globe (2012), the Transat Jacques Vabre (2011) and the Barcelona World Race (2010-11).

The history of the Bol d’Or Mirabaud reflects the evolution of our society over three-quarters of a century – once the reserve of the socio-economic elite, the race has gradually opened up to the public, much like the Fastnet Race and the Sydney Hobart. Sponsors have taken up the mantle from the great traditional families and have developed the international flavour of today’s event.

The Bol d’Or Mirabaud has attracted great names to its entry list over the years, with Russell Coutts, Loïck Peyron, Michel Desjoyeaux, Ellen MacArthur, Dona and Ernesto Bertarelli all lining up on the start line. Every year some of the greatest sailors in the world flock to Lake Geneva on the second weekend of June for a few days of racing and celebrations!

Dona Bertarelli returns to conquer a familiar challenge
Spindrift Racing squad co-skipper and helmswoman Dona Bertarelli is a faithful Bol d’Or Mirabaud competitor. She has achieved good results over the years and in 2010 celebrated one of the greatest moments of her racing career when she became the second woman in history to win the event outright with her multihull Ladycat.

Supported by Mirabaud private bank, Spindrift Racing is well known in international circles for its campaign to break sailing records. In the autumn of this year Yann Guichard plans to take on the demanding singlehanded Route du Rhum. But these remarkable exploits in no way overshadow Dona Bertarelli’s participation in this year’s Bol d’Or Mirabaud and other Lake Geneva regattas onboard her Décision 35 Ladycat. ‘This is my natural playground,’ she said. ‘I come from here. Of course I want to get good results offshore, but the Bol d’Or Mirabaud has special memories for me.’ Her first major victory that sparked the beginning of her offshore racing campaign and more ambitious goals being one of them!

Philippe Stern, president of Patek Philippe, is one of the pioneers of multihull racing on Lake Geneva. Between 1977 and 1992 he won the Bol d’Or no fewer than seven times with international metre class specialist Philippe Durr.

A spectacular record, but one at risk of being toppled in 2014! Ernesto Bertarelli and crewmember Pierre-Yves Jorand hold six victories between 2000 and 2011, as does Christian Wahl, skipper and owner of SUI9 and previous 5.5m world champion.

The class record will be harder to beat as the 6-Metres dominate with 22 victories notched up between 1939 and 1967. The Décision 35 catamarans that have dominated the Bol d’Or Mirabaud since 2004 have a way to go with only nine victories so far…

Setting a new record in 2014 is theoretically possible, although the weather statistics are not favourable. The current event record was set in 1994 by trimaran Triga IV that completed the race in five hours and one minute! Steve Ravussin subsequently won the 1998 Route du Rhum in the 40ft class with the same boat.

Growing international interest
For the first 65 years of the Bol d’Or (until 2004) only one non-Swiss competitor won the event when Arne Tengblad from Sweden seized victory in 1970. From 2005 this statistic was turned on its head: Loïck Peyron - who else? - became the second ‘foreigner’ to win the event, followed by Russell Coutts, Franck Cammas and then Michel Desjoyeaux in 2009.

Other international teams tried to continue the winning streak including Geneva resident Torbjørn Tørnqvist, owner of Artemis, and a Hungarian team onboard Raffica that won the monohull class in 2012 and 2013. And that is without counting the dozens of passionate amateur teams that tow their boats halfway across Europe each year to compete in the Bol d’Or Mirabaud.

In parallel local sailors have returned to the forefront with Dona Bertarelli winning the event in 2010, followed by her brother Ernesto a year later, then Jerome Clerc and Jean- Philippe Bucher last year.

Young guns
In addition to the pressure on local sailors from international teams, another contest is shaping up on Lake Geneva: young sailors are getting stronger and are starting to challenge the old guard. This symbolic transition was highlighted when a team from the Geneva Regatta Training Centre won the 2012 edition of the Bol d’Or.

Jerome Clerc and his team, and the crew on Team Tilt (Lucien Cujean and Sébastien Schneiter) and a few others are starting to overshadow the old guard. ‘Thanks to the Geneva Regatta Training Centre, our young sailors are sailing a lot and are catching up with some of our older sailors who spend less and less time on the water,’ explained Michel Glaus, president of the organising committee of the Bol d’Or Mirabaud.

Spurred on by their sponsor Realstone, the 2012 Bol d’Or Mirabaud winners have set up a professional sailing squad called Realteam that is competing on the international stage. The Swiss team’s 2014 season got off to a flying start in the professional Extreme Sailing Series.

These young sailors who dream of the America’s Cup and admire their predecessors on Lake Geneva such as Etienne David, Jean Marc Monnard, Christian Wahl and Ernesto Bertarelli are preparing well for their goals, said Nicolas Berthoud, a Whitbread veteran and head of Europ’Sails: ‘These young sailors are sailing a lot more than we used to at their age. They are supported by sponsors that expect results and the resulting structures that the teams have put in place are much more professional – Realteam is a good example, also the Regatta Training Centre, and of course Team Tilt that represented Switzerland at the Red Bull Youth America’s Cup in 2013.

‘The physical training is not to be neglected either! These young athletes also train a lot harder than we used to and this makes the difference on boats like the Décision 35. Having said this, as long as we – the old guard – can still hoist and trim at the same speed as them, we will still have our place on the lake…’ Berthoud added.

Any predictions for the next edition of the Bol d’Or Mirabaud? According to Berthoud, ‘there will be 11 Décision 35s on the start line, and all 11 can win. You need a certain maturity to choose your course on the lake, but the young sailors know the waters just as well these days.’ And a word from the young sailors? ‘This is the race to win for our team,’ said Realteam skipper Jerome Clerc. ‘Everyone has their heyday – it is time for ours!’

Click here for more information on the Bol d’Or Mirabaud »