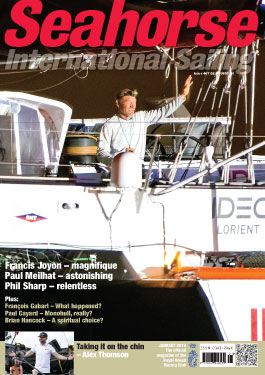 Watching the show
Places to be (and not to be). ROB WEILAND

Hydrogen power… Vendée Globe?
ØYVIND BJORDAL talks to PHIL SHARP about winning the next Vendée Globe in 2020 while saving the world

And fortunately it works
ERIC HALL likes most of what he sees with the new America’s Cup class. But he always would!

Unprecedented
Remarkable as it is the 2018 Route du Rhum marked the first time in recent memory that FRANCOIS GABART lost a major ocean race. But losing to FRANCIS JOYON can sometimes feel like an honour… as he tells JAMES BOYD

How simple is that?

Heart of the action

Update
First came the CFD (or at least first came all the pretty pictures) and then came the simulation – with Emirates Team New Zealand leading the way – and now comes the simulator. Plus the remarkable Dr Stuart Walker, breaking an Ultime from one who knows, first days with the Mule and ‘going back to San Francisco’. JACK GRIFFIN, ADRIAN THOMPSON, MALCOLM PAGE, TERRY HUTCHINSON, DOBBS DAVIS

World news
Some Route du Rhum… not so sweet for ALEX, but a nice future for ARMEL, an expensive lunch, rolling already for the ‘Volvo’. Plus GARY JOBSON pulls it off. PATRICE CARPENTIER, IVOR WILKINS, BLUE ROBINSON, CHRIS NICHOLSON, DOBBS DAVIS

Paul Cayard – really?
… plus not too shabby for an old fella

James Dadd – the only game in town?
… or why all that glistens really is not gold

Seahorse build table – Bow trash
It was an obvious thing to look at – but it still took us all a while. GIULIANO LUZZATTO

RORC news – Got there in the end
EDDIE WARDEN-OWEN