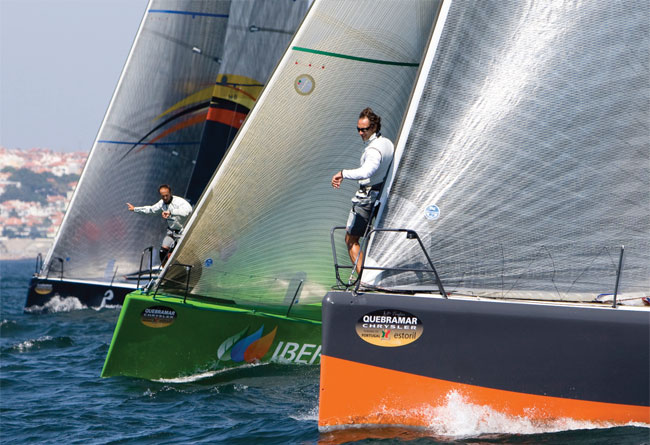 As the gap between grand prix racers and mainstream racer-cruisers continues to widen, moves are finally afoot to fill it. The new Med40 Series based in Palma is designed to satisfy the many teams who sit somewhere in between...

At the beginning of this century there was a proliferation of new designs and new classes, all trying to find their niche in the growing competitive world of inshore big-boat racing. The last generation of offshore boats were no longer interesting to a new culture of inshore racers. They now wanted the athletic and tactical skills required to excel in multiple short races held on the same day in sailing venues where good weather during the day at sea and at night onshore made for a positive experience for all.

Coupled with increasingly generous support from sponsors, there was a strong appetite for competitive onedesigns like the Soto 40s and, at higher prices, box rule boats such as the GP 42 and TP 52 classes. The boats were racing in well-managed and organised circuits like the MedCup, which eventually evolved into the only racing these boats did, losing their connection to racing under handicap in other races and regattas. Except for the one-designs, the pace of development was fast, with the newest designs inevitably having an edge over anyone in the existing fleet.

The 52SuperSeries has survived and thrived since the crisis-era demise of the MedCup, under the guidance and leadership of professional class management and visionary owners. And, after the start of interest in highperformance 40-footers began in the US with the HPR rule a few years ago, this prompted a keen group in the Solent to develop their own local circuit called Fast 40+, which is now in its third successful season.

However, until now there’s been no similar development of an inshore race circuit based in the Med for high-performance 40-ish footers. The boats are often just sitting on the hard, awaiting an opportunity to get out again and enjoy great, closely matched racing. They just need the structure of a class, a good venue for racing, a schedule of events and a transparent, measurement-based system to give them a fair chance with minimal optimisation work needed to be competitive.

Main picture: the new Med40 Series is set to provide a second lease of life for middle-aged GP 42s and other high performance inshore racers that are currently languishing ashore. Based in Palma Bay, Mallorca, the new circuit will take in world-class regattas such as PalmaVela and Copa del Rey along with regular class-only events held throughout the year

The Med40 Series is just that: based at venues in Palma Bay for inclusion in established world-class regattas like Copa del Rey and Palma Vela, plus class-only events organised throughout the year, there can now be a new focal point for competitive 40-foot racing in addition to the Fast 40+ fleet in the Solent.

The co-founders of the series, Siggi Mansaker and Shaun Carkeek, say their vision is to provide a new home and focal point for high-performance yachts, giving a second competitive life to raceboats that were great in their prime, but have since been sidelined due to a variety of changing circumstances. ‘The boats sitting idle just need a jolt of new energy to bring them together to race in one of Europe’s greatest, most accessible sailing venues,’ Mansaker says.

According to Shaun Carkeek, who has been an active designer in the Fast 40+ Series, it’s important the conditions are created to encourage owners into performance-orientated boats, bringing what they have to get started, while also encouraging new builds. The Med40 rules and series are being designed to support both tiers. Understanding the market and owners’ requirements and supporting old and new in a synchronised, sustainable format is key.

For new builds, the Med40 rules will produce similar boats to the current Fast 40s allowing a seamless crossover between the UK, Med and around the globe, but with new cost controls to relax the barrier for many owners. ‘We don’t want this class to escalate into a chequebook war and the new rules will create favourable conditions incentivising more players,’ he says. ‘Those interested can bring what they’ve got to get started and as the class grows and racing formats develop, the rules will help produce better sailing without breaking the bank.’

‘Employing VPP-based ORC tools for measurement and ratings, we can be effective in rating the differences between these performance boats and keep them closer in style and competitiveness. This class is not composed of dual purpose racercruisers, but proper late-generation planing hull form raceboats that are dual inshore/coastal capable, with minimal interiors and no rating credits for slow features.’

While the exact parameters are yet to be announced, existing designs that are good candidates for the Med40 Series include Fast 40s, GP 42s, Ker 40s, HH 42s, Soto 40s and the like. Mansaker reckons there are at least a few dozen of these in the region that could be brought to Palma, cleaned up, measured and made ready to race with little effort.

And with all the success of the 52SuperSeries producing new boats at regular intervals, Mansaker hints at following up with a Med50 Series to race the dozens of older TP 52s that are in a similar position of underuse. ‘We have had a lot of strong initial interest in this idea,’ he says, ‘and look forward to our first racing in the series at Palma Vela in May 2019.’

Click here for more information on the Med 40 Series »