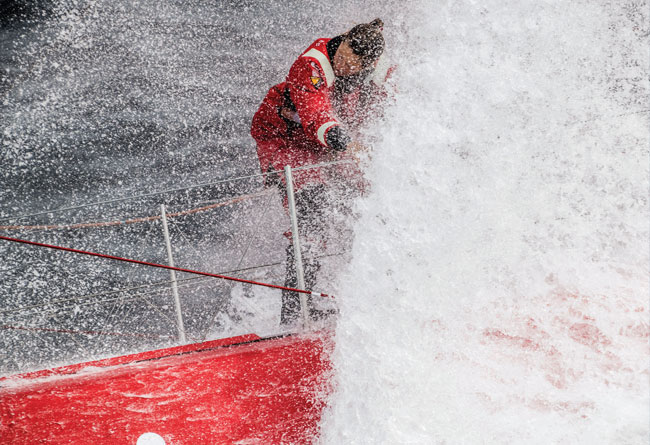 The Route du Rhum is about as hard core as offshore racing gets. Racing 3,500 miles singlehanded across the north Atlantic in early winter is tough going, arguably on a par with the major round-the-world races. Despite the challenge of racing from Saint-Malo to Guadeloupe in November, or perhaps because of that, the 40th edition of the Route du Rhum was booked to capacity. An all-time record 122 entries were on the start line on 4 November, with an estimated crowd of two million predicted to descend on Saint-Malo for the massed start.

Many of these solo adventurers were wearing Musto clothing for the race. They won’t risk wearing anything else. Three of the better-known participants are Jérémie Beyou, Sam Davies and Sam Goodchild. Beyou’s new steed is Charal, a space-age IMOCA with the most outrageous set of foils yet seen on an IMOCA 60. Having finished runner-up in the last Route du Rhum four years ago and twice being forced out of the Vendée Globe with gear damage, Beyou was determined to put in a good showing. That said, it’s early days on the water for Charal and the Route du Rhum provided a severe test for this cutting-edge design.

Vendée and Volvo Ocean Race veteran Sam Davies is a rookie in the Route du Rhum, but has the experience to get to the front of the IMOCA fleet even if her boat, Initiatives Coeur, isn’t quite as quick on paper as the likes of Charal. Sam Goodchild is another Brit and another Rhum rookie who’s set to compete somewhere near the front of the 52-strong Class 40 entry. All three of these sailors have accrued enough sea miles to know that you can’t afford to cut corners with your clothing. Davies feels particularly strongly about this. ‘Clothing and comfort is as important as having a new set of sails. People don’t seem to understand the importance of a sailor who’s operating on top form. So many times I’ve seen a campaign planned down to all the tiniest details, so much money ploughed into nutrition or the gym, personal training, and doing all the more obvious things to enhance your performance. But often these campaigns seem to forget the clothing, the need for comfort on board, and that you have to sleep at some point. Maybe there’s a bit of machismo, but people don’t seem to realise that when you get tired, and when people are miserable, how much it can affect the boat’s performance. I’ve seen it in solo and seen it in crewed situations.

‘We spend money on sails, foils, we do a whole heap of development, and when you’re going offshore in an extreme boat, there’s a big human element. If the human isn’t optimised, warm, dry, comfortable, if you’re not achieving those basic human needs, you’re failing in your performance. It frustrates me when people don’t understand that. That’s one of the reasons why I choose to work with Musto, is because it’s about performance and making sure my boat goes faster. When you’re on the bow doing 15 to 20kts, there’s a massive wave impact, and water can find its way through membranes. The way Musto clothing is made – and its use of GoreTex – keeps me much drier for much longer than anything else I’ve used. The Musto/ GoreTex combination has been the strongest and most reliable option.’

Main picture: having the right clothing is as important as having a new suit of sails, says Vendée Globe veteran Sam Davies, pictured here on the bow of Initiatives Coeur. Solo ocean racers would once slow down dramatically (or in some cases even stop) during sail changes in the interests of safety; those days are gone but some skippers may still allow the occasional wistful reflection...

All three of these professional sailors have used other brands, and still do. They have to, when they’re part of a team campaign where they don’t have the final say on clothing. But when they’re engaged in a solo project like the Route du Rhum, they come back to Musto.

Funnily enough, the new generation of high-speed foiling IMOCAs like Charal are proving to be a drier ride than the older non-foiling 60s, or the notoriously wet Volvo Ocean 65s for that matter. So although the demands on clothing don’t necessarily get harder because the firehose effect isn’t there so much with the higher-flying foilers, the demands are different, especially with the challenge of moving around the boat sailing at high speed, with the associated risk of injury if movement is impaired. ‘The VO65s are always wet and so were the older IMOCAs,’ Beyou says. ‘The boat is quite a bit lighter in the water when you have daggerfoils. Before, to be quick in IMOCA, you needed a boat to be like a submarine, with a lot of water in the ballast tanks. Now the boats are flying, so it’s a bit drier and that’s the good news. But, when the boat stops and pitches on a wave, suddenly you are under the water, and that’s when you need really good wet weather gear.’

Four years is a long time and Beyou says the level of competition will be much higher than the last Route du Rhum. ‘A few years ago when you were making a sail change or a manoeuvre, you tried to stop the boat to make it safe, but now you’re on the foredeck when the boat is going fast, which means that you have to be well protected. But that’s more because of the level of the competition, rather than the higher speed of the boat.’

As for his favourite bits of kit, Beyou says: ‘The HPX ocean racing trousers for sure and I also wear MPX shorts, which are particularly good when you’re inside the boat and it’s a bit wet; they’re very light and comfortable to wear for long periods.

‘The cockpit on the IMOCA 60 is well protected, which means I don’t need a full waterproof for a lot of the time, so I choose a Musto lightweight GoreTex jacket,’ he says. ‘I’m using the MPX Gore-Tex Pro Race jacket and I’m very pleased with it.’ 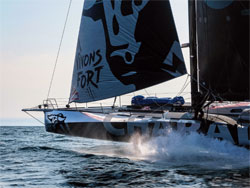 Above: the new full-foiling Imoca’s like Charal might look like they could offer give a drier ride than their predecessors but looks can deceive – and when you do plunge into a wave you just do it faster... Solo sailors tend to live in their wet weather gear and for that reason Sam Davies (below) says an important benefit of wearing Gore-Tex with a Merino wool base layer is that the combination helps reduce skin infections 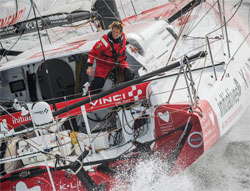 Like Davies, Beyou insists on using GoreTex gear. ‘Even when you’re in the doldrums, near the equator, on a boat like the VO65 it’s always wet on deck and you have to wear your wet weather gear. If you sweat, you’re fully wet inside and you get cold very fast. So the breathability is important in all conditions.’

For Sam Goodchild, there are two particular favourites in the Musto range. ‘I won’t leave the house without them,’ he says, admitting that he takes these items along even if the job requires him to wear another brand. ‘I always take my MPX dry smock with me, because I know I won’t have wet sleeves if I’m wearing it. Then there’s the fleece-lined waterproof hat with the ear protectors and sun visor at the front. I wear it whether it’s for the Caribbean 600 or the north Atlantic, because it protects your face from waves and the sun. As soon as there’s water across the deck, it’s a must-wear. You’d think it would be crazy to wear it on the Caribbean 600, but when I was on [MOD 70 trimaran] Phaedo, I wore it all night.’ Davies is also a fan of this hat, which she refers to it as her “duck hat”, and “definitely practical”.

Goodchild says there’s only one choice of clothing for his first Route du Rhum campaign. ‘There are brands that are waterproof and there are brands that do breathability really well. But it’s really hard to achieve both, and this is what Musto does so well. You don’t think breathability is that important until you start doing a manoeuvre and then you’re sweating.’ The longest offshore race he’s ever done is a Figaro, where the legs never last more than four days. He’s not expecting the Rhum to take less than 15 days on the Class 40, so long-term comfort will be vital.

This is a point reinforced by Davies. ‘On a long solo race, even the length of the Route du Rhum, I almost always have my trousers on, even when I’m grabbing some sleep. You have to be ready to get up on deck at any moment. The risk of living in your gear for so long, though, is you could end up with skin infections, and that could end your race. That’s what happened recently to a friend of mine. So you’ve got to look after your skin, which all feeds back to the importance of Gore-Tex, respecting the Musto three-layer system. I use only Merino wool base layers, the layer that keeps my skin as clean and dry as possible, and never itchy.

‘All these details are as critical as making sure your boat is bulletproof and ready,’ she says.