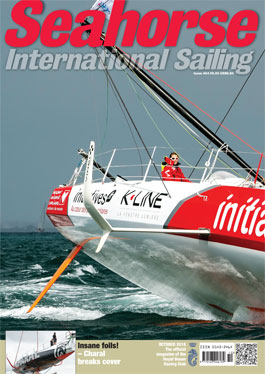 Gone with a whoosh
INGRID ABERY

Mouthwatering
The possibilities are endless but whatever the details it won’t be boring. We asked our former editor to dig into the ‘Volvo’ race’s nuptials with Imoca. MARCUS HUTCHINSON, JOHAN SALEN and ANTOINE MERMOD

The unruly beast
Not your everyday Wall Street tycoon but THOMAS W LAWSON was responsible for some remarkable ‘contributions’ to the history of yacht racing. JOHN ROUSMANIERE

No coincidence – Part II
There has been consolidation – and moderation – for the scows invading the Mini 6.50 class but all-out incursion in the Class40. And MARC LOMBARD seems to be getting it about right

We come in peace
The Cogito Brotherhood has been at it again… but now ‘everyone’ can benefit. DAVE CLARK

Update
The clock is ticking fast for America’s Cup 36… and for the Volvo Ocean Race. And the New York YC challenge is already feeling it. JACK GRIFFIN, ALISTAIR SKINNER, TERRY HUTCHINSON

Rod Davis – Mood shift
You just have to treat them differently