Thank you! Merçi! Thank you!!! 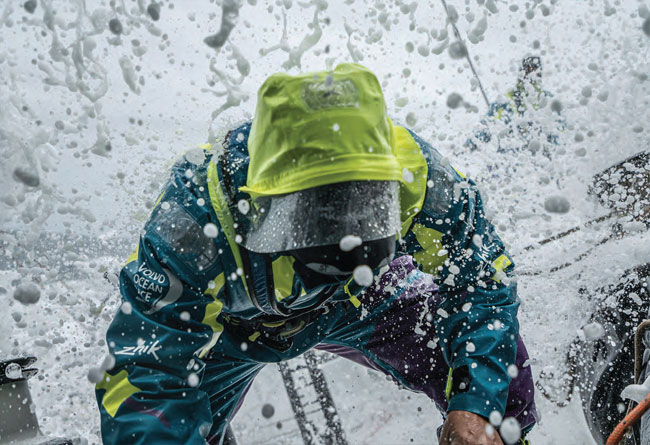 ‘Thanks for your support and all you have done to improve our gear! We all have been impressed,’ said Charles Caudrelier to his partners, Zhik, when he and his Dongfeng Race Team became the first Chinaflagged team to win the biggest offshore prize in sailing, the Volvo Ocean Race.

They say it’s the little things that make the difference at the top level of sailing, and yes, it’s a cliché, but after that sensationally nail-biting climax in the Volvo Ocean Race, could anyone argue otherwise?

After 45,000 nautical miles around the world, the winning margin on the decisive final leg came down to 17 minutes, give or take a few seconds. It had been a brutal, relentless race around the planet.

Caudrelier knew that his crew would have to keep on improving from leg to leg, and the demanding Frenchman expected the same of his partners.

Bruno Dubois, the team manager of the Dongfeng Race Team, was also impressed by the commitment from Zhik. ‘You guys never give up. Your resilience is the same as our team. We almost feel obliged to use all the new stuff – we feel that we owe it to you after all the work you have put in,’ he said.

While traditionalists might bemoan the use of one-design Volvo Ocean 65s in the past two editions of the race, the technical apparel industry has benefited enormously from this one-design era. Sailors are no different from any other professional athletes – they will look for an edge wherever they can find it. So if they’re not allowed to tinker with their onedesign boats, they’ll turn their attentions elsewhere.

Main picture: ‘There is no escaping the brutality of this boat.’ Competing in the Volvo Ocean Race is a feat of extreme endurance and choosing the right kit is crucial for success. The notoriously wet, exposed and brutally uncomfortable ride aboard the VO65 one design boats is a punishing test bench for clothing as well as crew

Improvements in the clothing were an obvious place to focus, particularly bearing in mind the exposed cockpit of the Volvo Ocean 65 and the constant fire-hosing of white water across the deck. There is no escaping the brutality of this boat.

The other factor was just how long this edition of the race was, as Team AkzoNobel helmsman and sail trimmer Luke Molloy says: ‘We realised that the race was one-and-ahalf times the length of any previous Volvo Ocean Race and we allocated enough garments per sailor to get through the extra distance. Volvo Ocean Race sailors are extremely tough on the gear so we knew that we would need a few sets per sailor.

‘We also worked with Zhik on refining the zip-on hood and other headwear to try and reduce the total number of garments needed by making them multi-purpose, covering a wide range of conditions.’

Considering that this was the Australian brand’s first foray into the Volvo Ocean Race, it might have seemed quite a risk going away from the proven alternatives. Not that Zhik is without pedigree, however. Since the 2004 Olympic Games in Athens, Zhik has powered many athletes to numerous medal winning performances, not least the Kiwi 49er duo Pete Burling and Blair Tuke who, after winning Olympic gold in Rio 2016 and the America’s Cup in Bermuda 2017, were competing in their first Volvo Ocean Race.

However, as Team AkzoNobel skipper Simeon Tienpont points out, ‘Zhik is pretty new in the ocean racing scene. But I knew the Zhik guys from the America’s Cup and the stuff they did for us then. They always put in the extra effort to make it right for us to fit properly – and to keep us warm and dry.’

Zhik had carried out extensive laboratory testing before releasing its offshore gear to the sailors. But the company knew that real-world feedback would be vital to developing the clothing further.

‘Due to the wetness of the race,’ Molloy says, ‘particularly in the first week of leg two, we worked with Zhik on a few concepts that we tried on later legs. I can't give away many details because we could see these features in their ranges of clothing soon. We were in constant contact with the designers at Zhik and worked on development throughout the entire race.’

It was a demanding course with multiple crossings of the Equator, which meant that the sailors would endure some of the coldest and very hottest conditions all in the course of one leg.

‘One problem all teams had was getting something that worked in hot and humid climates, while being firehosed by water on deck,’ Molloy continues, ‘and trying to find the balance between comfort and still remaining waterproof enough to survive 20-plus days at sea. Most of our development of the layering system was done prior to the start and I’m happy to report that we were all toasty warm in the Southern Ocean.’

The race was an opportunity for intensive testing and feedback in an extreme offshore laboratory, says Bart Milczarczyk, Zhik’s global head of design. The Zhik team spent time with the crews at the stopovers, undertaking thorough garment inspections, gaining vital feedback and co-ordinating a rapid response to trial new ideas.

By no means was it all plain sailing. Like all innovation and development cycles inevitably some concepts had to go back to the drawing board for refinement.

‘We had our butt kicked a few times,’ Milczarczyk recalls frankly, ‘which is ultimately a good thing. Our response was to dig deep and work harder. Once we commit to a new partnership we don’t stop until we succeed.’ Inevitably, there were some intense times with the development unit at full stretch for many months, especially as the ‘normal’ annual cycle of product development had to continue, too. 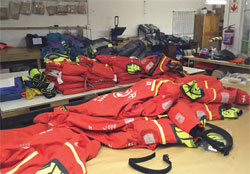 For Zhik’s design team, the Volvo Ocean Race was ‘an opportunity for intensive testing and feedback in an extreme offshore laboratory’. With two teams in the race wearing Zhik kit and providing a constant stream of feedback, the company’s development cycle was accelerated. The Dongfeng and Akzo Nobel teams were a great source of inspiration 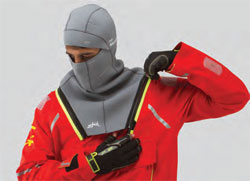 When Dongfeng Race Team crossed that finish line in The Hague, it was a big sigh of relief, not just for the team itself, but for Zhik as well. ‘What an incredible journey this has been for Zhik,’ smiles Piet Poelmann, the company’s chief executive. ‘We threw ourselves into the fire when we could have hidden. We knew this would be a huge project to take our kit to the next level. The fact that both teams are so happy makes the company very proud. The great thing for us now is that this technology is available for consumers to buy.’

Milczarczyk adds: ‘It’s really satisfying to have got through it, despite a few moments where it felt like we were struggling, with the brand reputation at stake. But our teamwork was good, lifting each other when we needed to, and the inspiration from the race teams was huge. Their task was to win and so was ours! It’s been an incredible journey and it won’t stop here.’

Seeing through white water
On a boat as relentlessly wet as the Volvo Ocean 65, visibility can be extremely challenging. Zhik helped solve that problem with the development of its Hydrovision visor, which proved a big hit with the helmsmen and helmswomen on the two Zhik-outfitted boats.

The visor was part of an integrated system of clothing designed to be as multi-purpose and adaptable as possible, as Milczarczyk explains.

‘The adaptive hood system that won the Dame award was a direct result of our design team fixing a problem, specifically that while each member of the crew could only take one smock or jacket with them on board, they really needed several different types of hood,’ he says. ‘Our new adaptive hood system gave the sailor a zip-on choice of hood with Hydrovision visor, Superwarm neoprene balaclava or a lightweight, water-repellent Avlare balaclava.

The Isotak X Ocean Smock and its Adaptive Hydrovision Hood would come into their own in the harsh conditions of the Southern Ocean. Team AkzoNobel’s helmsman, Nicolai Sehested, described the visor as ‘a godsend’.

There are several unique elements in the design and functionality of Zhik’s Adaptive Hydrovision hood and collar system: