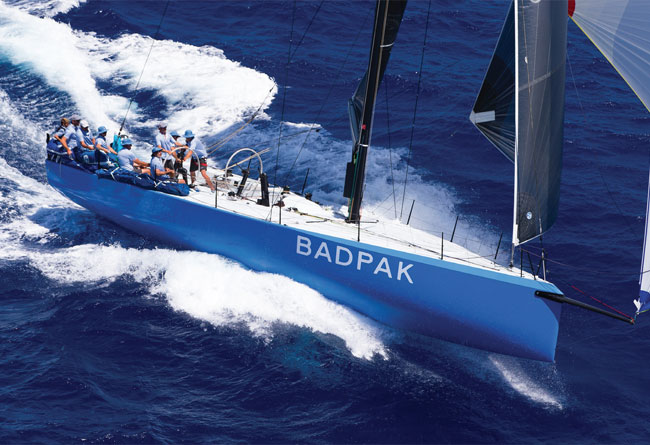 In 1886 Hawaii’s King Kalākaua invited the yachtsmen of the US mainland to race across the Pacific to his island paradise. Forty-nine times now the race has been run, and approaching Transpac 50, in 2019, it’s international. Among the world’s great ocean races there are not many that start and end among palm trees. There are also not many long enough to inspire the spirit of adventure of an ocean crossing in newcomers and veterans alike.

Even fewer races have the cultural heritage of an event started by royalty over a century ago, enriched by the participation of thousands of sailors since. Across the generations of California’s sailors Transpac is a tradition and a bond. For the internationals who drop in it’s a test as meaningful as any, but with sweeter rewards as the race goes on, and the sea grows bluer and the skies grow warmer.

The Transpacific Yacht Club was created in 1928 to manage the Transpac, and there is only one way to join the club. Race, and you will be invited.

Since the first race in 1906, when the start had to be relocated from an earthquake-damaged San Francisco to Los Angeles, the Transpacific Yacht Club’s 2,225-mile race to Honolulu has been an inspiration for generations of offshore sailors from all sides of the Pacific and beyond. Now run every two years, the list of entries and sailors from around the globe increases as they learn how this race is more than just a bucket-list event: it is a unique inspiration to connect with the ocean and our shipmates on what is always a memorable voyage at sea.

Main picture: Second overall in the last Transpac was Tom Holtus’s Pac 52 Bad Pak beaten only by another Pac 52, Frank Slootman’s Invisible Hand. Both boats featured star-studded crews for the race with Gavin Brady running the show on ‘the hand’ and Bruce Nelson taking time out from his design desk to navigate Bad Pac. The Pac 52s are a valuable spin-off from the TP52 class, using the same tooling as one of the best TP52s with changes to make the boats more suitable for ocean racing. Both these boats were designed by Botín and Partners

In those early days there were not many entries – the first race had only three boats competing – but even then there was recognition that to prepare and sail a race of this length organisers had to be innovative to ensure fair racing among boats of different sizes and types. So it was in this race that for the first time handicaps were introduced to try to equalise the competition by linking speed with length overall: based on an analysis of the 1905 Emperor’s Cup transatlantic race (won by famous schooner Atlantic) a basic time allowance system of 30 minutes per foot of overall length was devised.

This is one of many innovations introduced in the Transpac that has in turn benefited the sport. The course itself has inspired boat design even as early as the 1960s with the introduction of the venerable Cal 40, which competed in races held throughout the US, but seemed to do particularly well in Transpac. Cal 40s are still regular entries in the race, sometimes as a group to enjoy the camaraderie of this now-classic west coast design.

After the start off Point Fermin in Los Angeles the course during most years of ‘normal’ weather is a short 25-mile upwind leg to Santa Catalina island, followed by a close reach for a few hundred miles, then a broad reach, then a run for the remainder of the race to the finish line located at Oahu’s famous Diamond Head, an eroded volcanic crater that dominates the skyline east from Waikiki. This predominance of downwind sailing gives the race its unique style and rhythm, with days and days of riding the wind and waves of the subtropical trade winds a big attraction for all who race.

And for those who want to go fast and win this is also what inspired an entirely new genre of offshore racing designs, starting with Bill Lee’s Merlin, a 67ft long, narrow and lightweight speedster. It was in the 1977 Transpac that Merlin shocked the IOR racing world by rating the same, but speeding down the Transpac course to shatter a course record previously reserved for the bigger, heavier Maxis of that era. It was the stunning offwind speed of Merlin, Ragtime and other lightweight designs from around the Pacific that set off a revolution in modern offshore racing, where ‘fast is fun’ became a guiding principle in enjoying offshore racing.

The ULDB Sled class of boats that were built in the 1980s–1990s are still very much in vogue, not only in the Transpac, but elsewhere, providing fast performance with still enough creature comforts to allow those of us with maybe a touch of grey hair to get out there to be competitive in long offshore races.

For those with the energy and athleticism to get everything possible from a modern raceboat, it was the Transpac that inspired the next generation of designs with the advent of the TP52 class. The Transpacific YC over a decade ago commissioned the development of this new generation of offshorecapable boats to succeed the ULDB Sleds and encourage teams and their designers to explore the limits of this new box rule, with fantastic results. And while modern TP52s in the Med represent the pinnacle of monohull big boat racing, they are not raced much offshore any more. But the spirit remains alive in the new Pac 52 Class.

Next month we will explore other unique aspects of this great race, but for now save the date: the first start of Transpac 50 starts 10 July 2019.