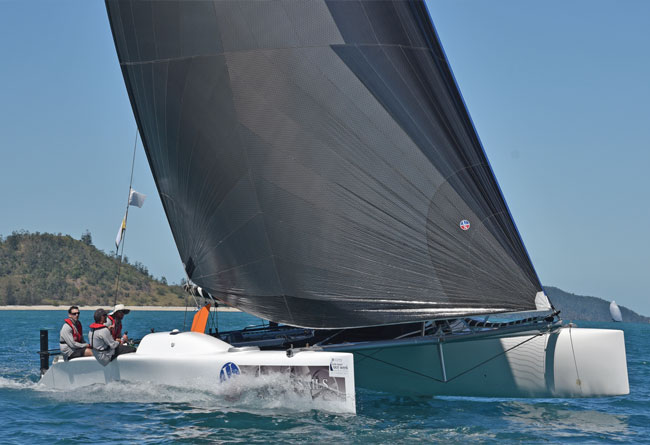 A calm, simple and positive approach characterises the international sailmaking business that has carried the Ullman name for over 50 years…

Since its foundation in Newport Beach, California in 1967 Ullman Sails has always gone about its business in a slightly different way, blending core knowledge with local talent to inspire a global network.

It is a glowing testament to the vision of Dave Ullman that the sailmaking company he founded over 50 years ago continues to thrive and succeed with pretty much the same structure he created. Comparisons with the laidback, chilled-out west coast vibe of the time would be entirely accurate. This is an organisation that is driven by an all-consuming passion for sailing, one that nurtures talent, takes great pride in its successes and learns from its occasional failures too.

The current management has kept Dave’s organic structure because it’s responsive, proactive and delivers pathways to innovation, so Ullman Sails is still about competing, creating, sharing knowledge, learning, improving – and having fun – as a global community of sailmakers.

‘Ullman Sails is essentially different,’ explains head of design Bruce Hollis. ‘It’s an amalgamation of very skilled independent sailmakers who aren’t always operating big lofts, but who have developed skills in their particular niche and sail at a really good level. They love the spontaneity, the creative freedom and responsibility our structure gives them.

‘We use a central design office to provide a skilled and knowledgeable point through which these lofts can interact. This connects the ideas and experience of a very large group of hands-on sailmakers to form a giant organic sail design brain. The range of conditions and customer expectations that this covers is amazing, and also brings together skills that inform the group across what a club racer in a dinghy might want, or a cruising multihull in Singapore, an iceboat racer in Russia or a skiff sailor in Europe.

‘Having the technical skills of modern computer design, enhanced and informed by this very direct connection of real world sailors with an interactive, supportive design office, works bottom up not top down. Ullman Sails International’s role is to support those local guys and give them the tools to do their jobs as well as possible.’

‘All the sail design needs to come through a central position, but it’s not driven by it. That’s the beauty of it – it stems from those loose Californian roots with Dave. I go back to 1995, but when Dave started up in 1967 it was rarely Dave dictating, it was what evolved from the discussion. That’s the ethos. There’s been a lot of change lately, a lot of expansion, but that essence of Ullman is still there.’

So how does that ethos manifest itself as a structure? How does this network of lofts actually operate? ‘Rolled goods sails, membrane sails and accessories are made in a central manufacturing facility in Cape Town, with most local lofts also making rolled goods sails,’ says Brad Stephens, head of technical development. ‘The four principal sail designers work under the umbrella of the Ullman Sails design team,’ he continues, ‘with the head of design, Bruce Hollis, in Sydney and the other members in Denmark, the UK and the USA.

‘With a globally distributed design team, a central manufacturing facility and various in-house sail designers with local manufacturing, Bruce’s daily consultations start with the USA east coast’s late afternoon and finish up with the UK morning. He is the centre of sail design for Ullman Sails.’

For Bruce this nebulous network really encourages fresh thinking. ‘Innovation can be driven in small circles as well as large, and the application of new materials has often been successful within small groups that push the boundaries, as they are the ones who commission and use innovation. It’s important we understand that failure is not a commercial issue, it’s a part of learning.

‘We use CFD and FEA to optimise sail shape and structure, and that helps us validate a lot of ideas and design pathways without full-sized experimentation,’ adds Bruce. ‘But local lofts engaging with each other through a central design team is also a great way of proving whether or not an idea is applicable.

The J/125 Timeshaver is among the most successful offshore boats currently racing in southern California. Long and slim makes for easy pace downwind but upwind it is primarily mechanical stability that gets you there – so quite easy to point high but not so easy to create sail designs that keep you moving fast through a chop. For the sailmaker a rewarding challenge...

‘While absolute top-end development is exciting and does provide innovation that seeds the whole sport, the application of these innovations still largely works through local sailmakers engaging with the people who make the final decisions: the customers. An Ullman Sails sailmaker might consult the central design team over material choice, but a lot of the time that discussion can cover the use of time-honoured materials that do the job at a price that suits the customer.

‘The real benefit is local lofts can work through and present solutions to local problems. If you look at Viggo Torbensen’s J/125 Timeshaver,’ Bruce continues, ‘which won its class in this year’s Puerto Vallarta Race, Keith Magnussen, from Ullman Sails’ Newport Beach loft, runs the sail programme, and we worked with him on the evolution of all of the sails, particularly the downwind wardrobe. The Newport Beach loft has got quite a few smart people in it. They race against other boats that are the same or very similar and they know what works. The J/125 is fast downwind, but it’s not powerful, it hasn’t got much form stability. They carry five spinnakers and they’ve all got really narrow ranges so we’ve evolved that wardrobe to fit these specific needs. The optimisation is driven by the local loft because they know what the problems are. My role is to ensure that the design will meet those needs. It’s been an interesting evolutionary process and presents a really refined, specific design suite that suits he characteristics of that yacht. The boat’s done very well.

'Another boat that won convincingly in a competitive class in the same race was Bob Pethick’s Rogers 46 Bretwalda 3, with Wally Cross from our Detroit loft running the programme. The Detroit loft's designer, Mike Boston, wanted to go wider and deeper on their pressure runner spinnaker. I had developed a limit on the design parameters for that sail, which at face value did not appear significantly different, but Mike backed himself so we did too and it turned out that these ratios improved the yacht’s soak mode significantly. That was a really valuable interaction. I thought I’d resolved those particular questions, but Detroit came up with a better solution, and now it’s part of our spinnaker design parameters so it benefits the whole group.'

‘The TP52 Quest/Balance has had great results, with a first, fourth and second overall in the last three Sydney-Hobarts. I’ve sailed with Paul Clitheroe for a long while on various Bénéteau and Sydney boats. When he said, “I’ve bought Quest, the TP52, the first thing I advised him to do was to get hold of Mike Green, as he was Quest’s sailing master. Greeny’s a hard old guy. He’s in his sixties and he still refuses to wear shoes. Paul made it clear he’d like to continue to deal with Ullman Sails, and Greeny respected that, so I’ve worked with Mike over three years to refine a wardrobe that’s specifically for the Hobart. Greeny understands that race better than almost anyone. He has very specific ideas about how he’s going to sail the yacht, and we match that with the sails. As it was, Paul committed to an inshore racing programme for the recent season so previous owner Bob Steel took on the offshore programme, including the Sydney-Hobart, which kept a talented crew together.

‘One of the best examples was the 4A spinnaker. It’s a solid sail. There’s a lot of work in it and it’s heavy, but the design basis of that sail was that it couldn’t break, that’s what Greeny wanted – they did three Hobarts with it and they haven’t managed it yet. It’s got a wide AWA range too, which was another of Greeny’s requests. In this year’s Hobart lots of boats broke 4s, 5s, all sorts of stuff. Quest went down there with a full main, that 4A and a staysail in 35kt. They wiped out every so often, but they didn’t break anything. And that’s a genuine test. Sorting out a small but effective wardrobe, and one that matches what Mike Green has asked for, has been a big part of the boat’s success. This last race they beat Ichi Ban by more in ORCi than Ichi Ban beat them in IRC, so they’re claiming they should have got the overall win again!

‘Our strength is that we have a lot of good people focusing on their particular strengths. We’ve been going gangbusters with multihulls, particularly here in Australia, with Paul Mitchell, who is Australian multihull champion with his 10m Grainger design, Dale Mitchell campaigning the Seacart 30 Morticia and Andrew Turner’s Nacra 36 in Brisbane, who all heavily invested in refining the sail programme for racing multis. We have a strong history there too, an example being through Tornado world champion, the late Giorgio Zuccoli, who is sadly missed.

‘On the cruising side we’ve worked on some of the South African cats, like the Open Ocean 740 and Balance 526. The 526 is a blue-water performance cruising cat with nice, reliable, robust sails that set great, look good and last well. We’ve filled those wardrobes out with purposeful sails, refined to what the owner wants.

‘We’ve always been about local sailors making sails for other local sailors,’ concludes Bruce. ‘Our group is tapping into the many great sailors who know specifically what they need, so we gain an edge for our products – and our customers.’