Stick to your last 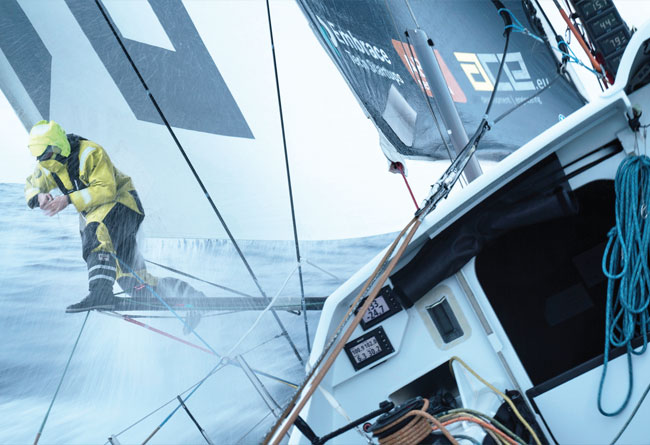 Dubarry started out making boots for the marine market and have since branched out into the much bigger and more lucrative markets such as equestrian and country lifestyle. Rugby is also an important target market, not on the rugby pitch but on the sidelines which in Dubarry’s native Ireland can be a cold and damp place to stand for two hours. Warm, comfortable boots are a prerequisite for enjoying a Six Nations match in the depths of an Irish winter or when watching the kids from the sidelines at Saturday practice.

Whatever other markets Dubarry may have unlocked, sailing is where the brand began and it remains central to the company’s DNA. For more than 30 years it has been the boot of choice for the world’s best offshore sailors. Walsh can recall when Lawrie Smith asked if Dubarry could make a boot that would match the purple of Silk Cut, the cigarette packet that propelled Smith around the planet in the 1997-98 edition of the Whitbread Round the World Race. It’s perhaps the first and only time Dubarry will ever make a purple sea boot.

Not that this company is averse to innovation. The Dubarry boot has a classic look but beneath that traditional exterior is some very advanced technology. Walsh highlights four key ingredients that contribute to the ongoing demand for their boots.

1. The NonSlip-NonMarking outsole
‘The first and very important ingredient is the NonSlip- NonMarking outsole,’ says Walsh. ‘That’s something that's been around for a long time, and in almost every independent test our boots invariably come out as best brand in terms of non-slip performance on a variety of different surfaces.’

2. Quick-drying leather
‘The second key ingredient for us is the leather that we use is DryFast- DrySoft leather. Not only do our boots dry out very quickly, when they do dry out they don’t become hard and brittle because of the quality of leather we use.’

3. GORE-TEX
‘The third key ingredient for us is GORE-TEX and, yes, there are other brands out there that have GORE-TEX as well, and that’s because it is the best waterproof breathable membrane available on the market.’

4. Design and engineering
‘GORE-TEX by itself is not the answer,’ says Walsh. ‘It’s about the whole design and engineering that have gone into the boots in terms of how well they fit. Now that might sound obvious and straightforward, but it’s an area the clothing manufacturers have really struggled to get right. Footwear used in this environment has to be a precise fit to do its job properly.’

These four ingredients have helped keep Dubarry at the top of their game, despite the number of clothing brands moving into this market. ‘If when you buy a jacket or a pair of trousers they're a little bit longer, a little bit short, a little bit loose, a little bit tight, you can get away with it some of the time,’ says Walsh. ‘With a pair of boots it needs to be absolutely spot on. So the whole issue of engineering is really important.’ 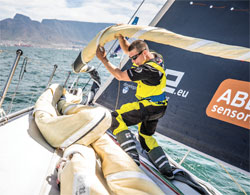 Above: grip is everything, even on a bone-dry deck, but do try not to step on those slidy slidy sails… And then of course there is keeping the water out 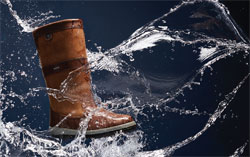 Listening to the sailors
No one knows better than a sailor what a sailor wants to wear, and some of Dubarry’s best innovations have come from the ocean-going professionals. While professional sailors are often obliged to wear the boots from an official clothing supplier, Dubarry often sneak into onboard footage sent back from yachts in big races like the Volvo. ‘When they’re in the Southern Ocean a lot of the crew choose to wear a rubber boot,’says Walsh. ‘And the reason is they know they’re going to get absolutely saturated. Because it’s a rubber boot, it’s easy – it dries out very, very quickly.’

However, the Dubarry solution and boot many sailors are now wearing is called the Crosshaven, which comes with an integral gaiter. ‘That boot came about as a result of Ian Walker and the guys on Green Dragon [in the 2008-09 Volvo Race] because when they were at the Galway stopover we had a sit-down with our design team and engineers and met all the guys. They had taken one of our boots and concocted a kind of homemade gaiter. So we probed on that idea and out of it the Crosshaven boot has evolved into the product we have today, with the integral gaiter that is so valued by sailors.’ Dubarry are the official supplier to both Team Brunel and SHK Scallywag in the latest Volvo Race.

The Goodyear inspiration
Some of the best ideas come from completely different and unexpected places. Michael Walsh recalls the genius of one of their engineers back in the day, Frank Hession. ‘Frank was one of those lateral thinkers with a strong sense of good engineering. When he was presented with a problem he would go away and think about it, then come back with something sketched out for us and would say, “Look, this is the direction I think we should go.”’

Dubarry’s patented NonSlip- NonMarking outer sole was a case in point. ‘On your typical deck shoe or sailing boot there’s a kind of ridge design that goes from right to left, a whole series of lines going laterally across the sole. But Frank had an interest in rally driving and motor racing generally. One of the challenges for us at the time was to produce a rubber outsole that offered the best non-slip performance; Frank equated that requirement to his experience in rally driving and indeed in Formula One racing, where clearly they spend a lot of R&D time trying to produce the best possible grip.

‘So he modelled the outsole pattern on the Goodyear car tyre. And you’ll see that a Dubarry outer sole has all these interconnecting channels, so it's moulded in a maze-type shape. The advantage of that is when somebody applies their body weight to the deck the water gets dispersed in six different directions, as opposed to a typical ridge sole where it will either go left or right. And invariably what happens is the water will be forced to flow into the next channel of the ridge sole. And that's when you start to get aquaplaning.’

Frank Hession’s Goodyear solution helped address the aquaplaning problem, which is why Dubarry boots are among the grippiest in the market.

Extra-light is key to Dubarry’s spring-summer footwear
Aside from the hardcore sea boots for which Dubarry are best known, earlier this year the brand’s latest spring/summer footwear range was launched. Even here technology plays a strong part in the Dubarry range. For example, the new Sailmaker men’s deck shoe boasts a sole that’s three times lighter than normal, thanks to Dubarry’s Extralight technology.

‘Most deck shoes have a straight rubber sole which makes it quite hard underfoot,’ says Walsh. ‘That might be OK for periods onboard, but it becomes uncomfortable if you’re wearing it all day as a leisure shoe. So we’ve taken the concept of a dual-compound sole from our boots, where you have a rubber outsole and a midsole (which might be made of polyurethane for a boot, or in the case of the Extralight it’s made of EVA which is a really lightweight material). So it has the advantage of giving you that nice underfoot comfort and shock absorbency, but it actually looks very smart as well because it doesn't look too chunky.’