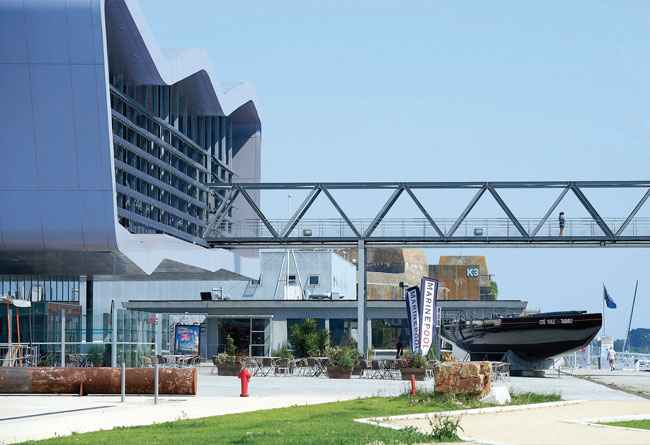 The 11th Yacht Racing Forum is scheduled to be hosted at Lorient in Brittany in October 2018... right at the heart of modern ocean racing

They call it the ‘Sailing Valley’. It is the very heart of international offshore yacht racing in the south of Brittany, a part of France (from Brest down to Vannes) that focuses strategically and with strong political support on watersports. A dream location for anyone involved in sailing and yacht racing – the logical and perfect venue for the Yacht Racing Forum 2018 (22-23 October).

Lorient is a natural shelter for sailors, while the rest of the area is a magical place of sandy beaches and jagged reefs, fortified port towns and standing stones. It is warmer than the wild north coast, but the traditions, independent spirit and seafood are just as good.

Go to the bakery in Lorient and your chances of bumping into a host of offshore legends are high. Thomas Coville, Armel Le Cléac’h, François Gabart, Franck Cammas, Justine Mettraux, Francis Joyon, Jimmy Pahun and Jean-Pierre Dick live, train and develop their racing boats in the area, and most will be at the Yacht Racing Forum 2018.

Brittany’s Sailing Valley earned its nickname due to the high number of companies involved in yacht racing that are located there: Multiplast, Lorima, NKE, GSEA, CDK, Plastimo… Even North Sails are now developing their new world R&D department in the Sailing Valley. There’s a huge economy centred around yacht racing here, with boatbuilders and designers, technical companies, sailmakers, riggers, yacht racing photographers and filmmakers, you name it… This year the Yacht Racing Forum will dedicate a third day – Wednesday 24 October – to a visit to some of these companies that have such an influence on our sport worldwide.

Main picture: La Cité de la Voile Eric Tabarly incorporates a wide range of permanent and pop-up exhibitions and teaching resources dedicated to the heritage of offshore sailing and the oceans. Seen here in front of the former U-boat bases is the main museum which houses a vast range of sailing and nautical exhibits including multiple sailing simulators, one of which will take you deep into the Southern Ocean onboard an Ultim tri…

In the late 1990s several skippers such as Alain Gautier and Franck Cammas settled in and around Lorient, taking advantage of the conversion of the former Keroman submarine base, which closed in 1997. Today the old base is entirely devoted to sailing and yacht racing and, with its modern and adapted infrastructure, it is the first of its kind in the world.

Five out of seven Vendée Globe winners come from the Sailing Valley. Winner in 1993, Alain Gautier, was the first skipper to move to the harbour facility in Lorient when it opened in 1998. ‘The development of this area resulted from strong political leadership,’ he recalls. ‘Jean-Yves Le Drian, who was the socialist mayor of Lorient at the time [now the French minister of Europe and Foreign Affairs], understood that the military and fishing industries were in decline and that yachting, and especially yacht racing, was a promising alternative. The space was perfect for raceboats: wide and deep. I moved in with my trimaran Brocéliande and was soon followed by Groupama, Banque Populaire and many others. The industrial development took place in parallel and led to a fantastic, very powerful structure, supported by a local airport, a TGV [super-fast train] and a good road infrastructure. The entire area became a magnet. Like Le Mans for car racing.’

The quality of the site and the presence of specialised companies attracted other sailing teams. The city then developed an offshore sailing school (Pôle Course au Large) and the stunning Cité de la Voile Eric Tabarly, a giant museum dedicated to the sport of sailing, opened in 2008. This is where the Yacht Racing Forum evening reception will be on 22 October, in the middle of the exhibits.

The greatest teams from France as well as many international sailing teams are based here all year round to prepare for major competitions such as the Jules Verne trophy, the America’s Cup, Route du Rhum and the Vendée Globe. Accessible 24 hours a day, regardless of weather conditions, the submarine base and its harbour are the heart of Lorient and now incorporates companies such as riggers, sailmakers and suppliers of electronics and other essentials to the skippers who are preparing campaigns to the highest level.

Based some 35 miles away, in Port La Forêt, also part of the Sailing Valley, Michel Desjoyeaux, winner of the Vendée Globe 2000 and 2008, considers that the development of the Valley started even earlier than the 1990s, with sailors such as Eric Tabarly. ‘It has been a snowball effect that started in the 1970s, when good sailors, who were trying to become as good as the best, came to Brittany to compare themselves. The industry has gradually followed, and the political vision has accelerated it. We are lucky to have an extraordinary playground: the Atlantic, the Gulf of Morbihan and now the infrastructure and the technical background. We’ve got everything, and no need to go anywhere else!’ he says.

The Forum is open to anyone involved – or simply interested – in yacht racing. It assembles the sport’s leading personalities from all over the world for two days of conferences, presentations and social events. Sailing’s leading brands, events and classes showcase their products and events.

The programme and speakers will focus on the future of sailing including youth sailing, new classes and events, as well as event management, computerised systems, digital sailing, new materials, designs and technologies. It will also emphasise the sport’s leading events: the Volvo Ocean Race, the Route du Rhum, Class Ultime and the America’s Cup. Mainstream yacht racing, raceboat insurance, club management and popular sailing classes will be discussed, with conferences focusing on sponsorship, media exposure, sustainability and much more.

The sport of sailing wouldn’t exist without great imagery; yacht racing photographers and filmmakers will be celebrated too, through the Mirabaud Sailing Video Award and Yacht Racing Image award.

Below: The Lorient U-boat bases and their neighbours down the coast in St Nazaire, like other World War II constructions around the world, are simply too strong to dismantle (just as intended…). Now all these massive buildings and the open spaces that surrounded them have been turned over to the sailing industry and to the big race teams which rely upon it. This is where Groupama Team, which scored an unexpected debut Volvo Race win, prepared and trained. It is also where their in-house design team took their baseline Juan K-designed VO70 and finessed it further to produce their race-winner. Technology centre indeed

Run alongside the Business & Marketing Conference, the Design & Technology Symposium (22 October only) will focus on the latest innovations, materials and designs, data analysis, innovations in sail design and construction. Over the past few years the symposium has gathered momentum and now welcomes over 100 delegates, including experts from the America’s Cup, top-level builders, engineers and designers, software and hardware specialists.

Many of the sport’s most involved brands and stakeholders have already confirmed their participation. The conference will once again deliver important ideas and concepts, and open up new business opportunities. The event will also provide the chance to discuss the issues facing the sport and to share best practice. It is a must-attend event for organisers, sponsors, sailing teams, technical providers, venues, yacht clubs and agencies involved in the yacht racing industry.

Concrete achievements
The Yacht Racing Forum is an important conference for our sport. It isn’t a decision-making body, but it plays a leading role in identifying the sport’s key issues, debating its problems and highlighting specific points of interest for its future development. Many organisations also use the Forum to launch a new product, brand or event.

For example, the Forum initiated presentations and debates on risk management and safety in 2015, focusing on the effect of hydrofoils on safety. This subject is more topical than ever with boats that are faster by the day and not always managed by competent crews, and also race organisers who don’t always understand the implications of a regatta with foiling boats. The Forum also initiated discussion on sustainable development a decade ago; at a time when many sailors were still wondering what it means and what it has to do with yacht racing. Today

World Sailing consider sustainability an element of strategic importance, while many new organisations such as 11th Hour Racing, Sailors for the Sea or Race for Water focus entirely on the protection of our oceans. World Sailing also used the opportunity to disclose their new graphic identity. The ‘Bretagne Sailing Valley’ brand was launched at the Forum and the Volvo Ocean 65, used during the Volvo Ocean Race since 2014, was conceived during it. In short, an event not to be missed!

Click here for more information on the Yacht Racing Forum »