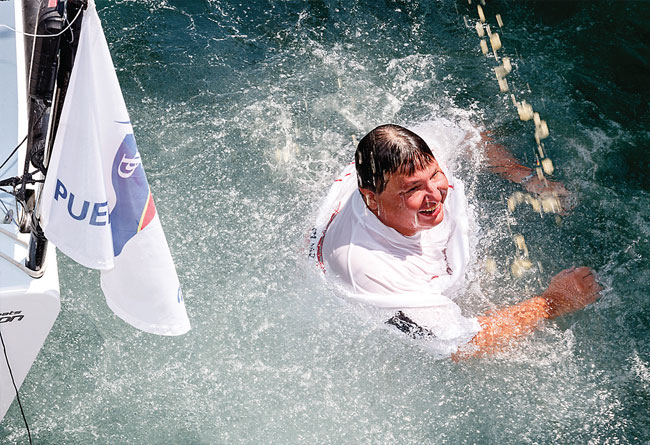 ROB WEILAND has plenty to smile about…

Sailing industry watchers will notice that, as has happened in the past, yacht racing is one of the last ‘industries’ to pick up after a recession and only after years of economic expansion is interest likely to grow again. Big boat classes and events are low in numbers and gaining or losing a few boats can make a considerable difference to how well the event or fleet is seen to be doing.

Both the America’s Cup and the Volvo, to some extent sailing’s role models, are not looking all that flash. The Cup, maybe too extreme in the varying of its weapon of choice between Matches, is slow out of the blocks in terms of teams joining. The Volvo seriously lacks direction; I expect a complete change of philosophy from the Swedish carmaker – better late than never. Cannot imagine they are going to pay for yet another generation of Volvo one-design boats, only to find potential teams twisting their arms continuously for ever more support.

The Super Series and the TP52 class were, in terms of participation, banking heavily on the America’s Cup for their 2018 growth. But seen from the perspective of today, given the low AC commitment and the information that has to date been released about the next Cup boat, the bar is so far away from the relative simplicity of a TP52 that it takes some imagination to see so many benefits to having the Super Series as the first step on quite a long ladder to the old mug itself – other than keeping shore and boat crew on their toes in high-level competition.

Still the 52 Super Series will see three Cup teams at what looks like a 12-boat opening event in Sibenik, Croatia, of which in reality only Luna Rossa is an addition to the fleet. Quantum Racing (Bella Mente Quantum Racing Association) and Gladiator (Land Rover BAR) are longterm Super Series entries already.

There was interest from others, such as Team France. Two new teams actually bought a TP52 to enter the 2018 Super Series and shortly afterwards changed tack, putting both boats back on the market. It takes a bit to surprise me but…

With nine new TP52s touching the water this April the Super Series will again be high-quality racing as well as fascinating to follow. The new boats are yet another refinement of what for most is already heaven, and I especially cannot wait to see the detailing. Expect the boats and rigs to be able to take higher loads than their predecessors, with ever more clever systems to collect performance and boat data and to synchronise these with sailing images.

Hulls and foils will be optimised for the conditions that are anticipated given that there are two years of racing mainly in the Med ahead. Right now it looks as if we will see the same number of boats competing as in 2017, or possibly we will be one up at some events. Until two months ago I saw no problem in predicting growth by at least two teams. I now feel that growth is a realistic option for 2019-2020.

Over winter interest in buying recent TP52s and in 52 Super Series participation was larger than ever. Some of these owners and teams will for sure materialise over the years to come. Perhaps strange at first sight but the fact that not many AC teams have joined in 2018 could be the basis for growth in 2019-2020, as AC teams potentially join for one year only.

Looking at handicap-scored regattas, I expect to see fewer big Maxis enter the 2018 classic handicap-scoring events, whether offshore or inshore, except probably for racing in Australia. However, I do not foresee the overall number of entries for these races going down because I think there will be more boats below Maxi level – as was the case in the recent RORC Caribbean 600.

Generally in IRC it will be interesting to see whether, how and when rule managers will tackle the trend towards relatively light and wide fin-keeled boats cashing in on avoiding the increased bulb penalty introduced in 2014. Or if – or how fast – this trend gains further ground and how these designs will develop. I do not feel there is any need for a strong reaction from the rulemakers, but as the ‘French revolution’ is likely to demotivate more traditional cruiser-racers from participating I guess some kind of correction will be considered.

In future it will be an interesting battle between the inshore-optimised but still quite all-round TP52/Maxi72 bulb-keel concept and the offshore-optimised French fin keelers that are slowly improving towards being more all-round performers, such as the two Teasing Machines from Bernard Nivelt and the various successful yachts from JPK. In both schools of design hull shapes are the real winners here, with hulls looking smarter by the year.

From a safety as well as a keeping-it-practical point of view I also feel IRC should look into guiding us towards sensible drafts, as well as boats that do not rely too much on hull stability – an issue that has been magnified by the move away from heavy keel bulbs.

Somewhat unexpectedly there seems to be pressure on the number of 40ft+ boats at class starts or class events, whether one-design, box rule or manufacturer rule. From RC44 to Wally or J Class the average number of boats racing at quite a number of class events has decreased from last year. Not too sure on the Fast40 numbers in the UK but, contrary to what I thought a year ago, I would now not be surprised to see them finding it hard to equal last year’s participation numbers.

ClubSwan50 is an exception. Since the introduction of the aggressively styled Juan K design, numbers participating have increased rapidly as a result of hard work by Nautor’s Swan promoting one-design class racing.

Maxi72 numbers are also potentially on the way up with a new Bella Mente under construction and the former Bella, now called Lucky, joining the fray. Also back on stage is the former Robertissima, now Sorcha.

At Maxi level nothing is ever simple. The 72s are great pot-hunting boats and for quite a few of the teams class racing is often secondary to winning the big handicap trophies. Once chasing the same pots, however, the 72s will effectively be class racing and then the teams are in a bit of a Catch22 on whether to apply class rules and if so which ones…

I am sure that owners, once they sit down together, will find mutual ground for their future plans. Whatever boat or format ends up foremost, enjoy your racing. It is about the sailing.
Rob Weiland, TP52 and Maxi72 class manager