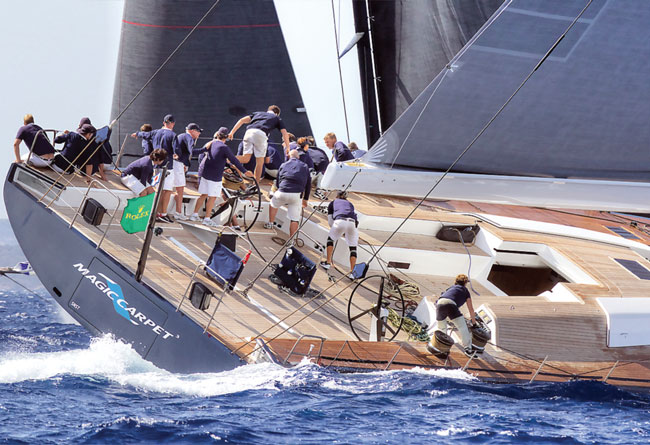 Welcome… to the first of a new regular Seahorse column aimed at keeping sailors informed about the thriving world of Maxi racing.

As this is the first column, I would like to clarify some common
misconceptions.

Back in 1980/81 when the International Class A Yacht Association (ICAYA) was formed things were in a way much simpler. Almost all serious international yacht racing was conducted under the International Offshore Rule (IOR), making it the obvious system to adopt. A group of five founder members who enjoyed racing in the wonderful waters of the Costa Smeralda started the organisation with the primary purpose of promoting racing Maxi yachts… but also as a somewhat exclusive social club.

Over the past nearly 40 years many things have changed. The demise of the IOR meant a change of name in 2000 to our current title: the International Maxi Association. We now co-ordinate a variety of rules that apply to a very diverse fleet of large yachts – which has evolved to a rather confusing set of sub-divisions of fleets and categories. Maxi life is far more varied today than back in the days of IOR when famous raceboats like Kialoa and Windward Passage were the undisputed alpha males.

There are further sub-divisions, all with the purpose of trying to let boats of similar performance compete together. The main split is in the Mini-Maxi and Maxi classes into racer and racer-cruiser categories. The final decision on class placement is always made by the technical office of the IMA, the reason being that there has been an inevitable push by owners and designers to design racers with minimal accommodation and try to designate them as racercruisers. These decisions are tricky and can produce anguish…

However, five years ago we arrived at a point where a group of more serious raceboats had begun to emerge around an LH of 72ft. Grouping these into a separate class cleared the way for a much easier decision between racer and racer-cruiser. From this step the Maxi72 class was born – now arguably the blue riband grand prix monohull class in the world.

Now to clear up another common confusion. Our flagship regatta, held every September since 1980 – hosted jointly by the IMA and the Yacht Club Costa Smeralda – is now called the Maxi Yacht Rolex Cup. Early editions were titled the Maxi World Championship until the International Sailing Federation (now World Sailing) decided it should tighten up on the use of ‘World Championship’. However, after some negotiation we retained the right to award two world championships each year to Maxi classes. At the same time the IMA became an official ISAF International Class.

Main picture: Maxi racing in 2018 is very different from how it began with the IOR Maxis that appeared in the 1970s and thrived on and off up to the early ’90s. The advent of modern powered sailing systems plus the expansion in wealth at the ‘top end’ – further boosted by the technology boom – have produced a spectacular fleet of beautiful large fast yachts that also boast the comforts required by owners whose competitive hunger does not yet extend to putting up with the spartan interior of a yacht like Matador2 or even of today’s very refined Maxi72 – the nearest thing we have to the boats that began it all

In practice our fleet was too heterogeneous to make sense of two awards so we awarded one title only, to the Mini-Maxi division with a World Championship being held from 2010 to 2014. But even that was too wide a performance spread so the next logical option was to allocate the title to the new Maxi72 Class where it has stayed since 2015.

But that left us with a ‘spare’ Worlds. The J Class has undergone the most remarkable renaissance, largely due to the tactful guidance of its class secretary Louise Morton. After some lengthy negotiation – now with World Sailing – it was agreed that if we could get at least five J Class yachts racing together we could award them our other World Championship, as long as they affiliated to the IMA.

This finally happened in 2017 and the event, held in their original American home waters of Newport, Rhode Island, was undoubtedly one of the most spectacular regattas of recent years.

Other than being a class organisation and facilitating the world championships for IMA classes, we have further ambition to be the umbrella organisation that promotes Maxi yacht competition anywhere in the world and offers support and expertise to any group of owners.

Our goal now is to strengthen the identity of these classes and to provide support wherever we can. For instance, we are talking to the classic schooners about the benefits of IMA affiliation.

The IMA is now quite a large body – especially considering the size of the yachts – with over 50 members and a strong team of officers. Our own technical office maintains close checks on yachts racing our events and we maintain a healthy association with the major rating bodies, IRC and ORC, and keep a constant check on rule developments.

A good example is the Wally class, for many years the strongest division at September’s big event in Sardinia. They have their own class rules and class management to try to keep them within the Wally cruiser-racer philosophy and, despite being quite disparate in length and performance, achieve fair and enjoyable racing. The current president of the IMA is a Wally owner.

Over the years the IMA has expanded beyond our original base at Yacht Club Costa Smeralda and we now work with clubs all over the world. We recently launched the Mediterranean Maxi Offshore Challenge series to expand beyond our core of day racing, which has brought us into association with a welcome number of new clubs.

From being a mainly ‘social club’ we have become a promoter of high-quality Maxi yacht racing in general, as is expressed in the introduction to our new rule: ‘The International Maxi Association Rule intends to guide and structure Maxi yacht racing. The rule defines and categorises Maxi yachts. It aims to embrace all Maxi yachts and as such follows, instigates and encourages developments that are deemed to have a positive effect on the construction and racing of Maxi-sized yachts.’

We are very grateful for all the support we receive – especially from our longtime partners, Rolex and our spiritual home the Yacht Club Costa Smeralda.
Andrew McIrvine
Secretary General, International Maxi Association